Please find a growing list of books, letters, manuscripts and ephemera included in the Luke-collection below the following description. From April 1st, 2020 we will continuously upload more descriptions of letters and ephemera from this vast collection. Stay tuned or subscribe to a regular update of new Luke-materials we are adding.

Large Archive / Collection of Sir Harry Luke’s personal letters, photographs and Ephemera from his 39 years of service for the British Colonial Office in Cyprus, Malta, Palestine, Sierra Leone, Fiji etc. etc., including working copies of his own publications, a typescript-manuscript of unpublished work (″The Englishman in the Levant – Being a Prose Anthology of the Near East”) and sensationally his very valuable manuscript-notebook of recipe-collections together with his working copy of the sought after cookery book “The Tenth Muse”. The collection includes over 60 books and numerous pamphlets, often not only annotated but also with loosely inserted manuscript letters, notes or drafts. The included pamphlets and ephemeral publications are scarce and often never offered on the international market. The collection furthermore includes original manuscript letters and typed letters addressed to Luke by important contemporaries such as Sir Ronald Storrs, vintage photographs of a private nature as well as for example the visits of the Prince of Wales (later Edward VIII) during Luke’s time at Sierra Leone. The collection is of great importance due to the presence of an abundance of letters Sir Harry Luke himself wrote home during his first travels through the near and middle east between 1908 and 1910. These letters from Luke’s inaugural middle eastern trip, together with an abundance of letters to his father and other family-members, written during his tenure at his postings throughout his career, were reunited with Luke’s private papers after the death of his parents and they are allowing an intimate glance into the life and thoughts of a british colonial officer during the most dramatic times within the mediterranean powder-keg in the 20th century (1908-1949). His presence in Palestine during the Jaffa Riots (1921), root of all Arab-Israeli conflict, the wailing-wall incident in 1928 (during which he disarmed the special jewish constables in the Palestine police) and his overall life as a career-diplomat, his passion for food and ceremonial and controversially his understanding for the Arab world, even though himself being of jewish descend, reflected in personal and official letters, make this collection a unique, extraordinary addition to every private or public library dealing with the near and middle east. This huge and important collection is in the process of being carefully catalogued in every detail and you can request a full list of items, images and bibliographies or simply follow the cataloging-progress of the collection on our company’s website under the section “Libraries & Collections”.

To His Excellency Sir Harry Charles Luke, Knight, C.M.G. Governor in and over the Colony of Fiji and High Commissioner for the Western Pacific.

4. [Luke, Harry Charles] From The Sikh Community of Fiji.

Welcome Address To His Excellency, Sir Harry Charles Luke C.M.G., Governor in and over the Colony of Fiji, and High Commissioner for the Western Pacific. From The Sikh Community of Fiji.

Cities and Men: An Autobiography. [Author’s Own Copy].

Description Of The Island Of Malta & A Brief Treatise on Knightly Behaviour. Translated from the Italian, Introduced and Annotated by Averil Mackenzie-Grieve. 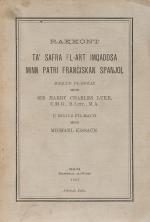 Malta: An Account and an Appreciation. [Author’s Own Copy] / With manuscript letter from Sir Hannibal P. Scicluna Lieutenant-Governor of Malta 1930-1938.