Original map dates from 1590, but this edition is from 1624.
A richly detailed map focusing on the ancient Carthaginian kingdom at the time of the Punic wars. The map covers the north African coast from Algeria to Libya, centering on Tunisia and including the islands along the coast and the southern tip of Sicily. Malta can also be seen. An inset plan shows the city and harbour of Carthage prior to its destruction. Also, an inset with text cartouches in the lower bottom of the map with extensive Latin historical descriptions and listings of place names. Villages and towns are shown as miniature views, also mountains and rivers are engraved on the map. Administrative provinces like ‘Tripolitana regio’ are listed: ancient cities such as Sabratha are identified; and the map carries many annotative captions with information from Pliny and Ptomley, Tacitus and Herodotus concerning native tribes and nations such as the Nigintimi and Lotophagi.
Ortelius’ characteristic ornate title cartouche with Classical embellishments and border inlaid with longitudinal and latitudinal details. 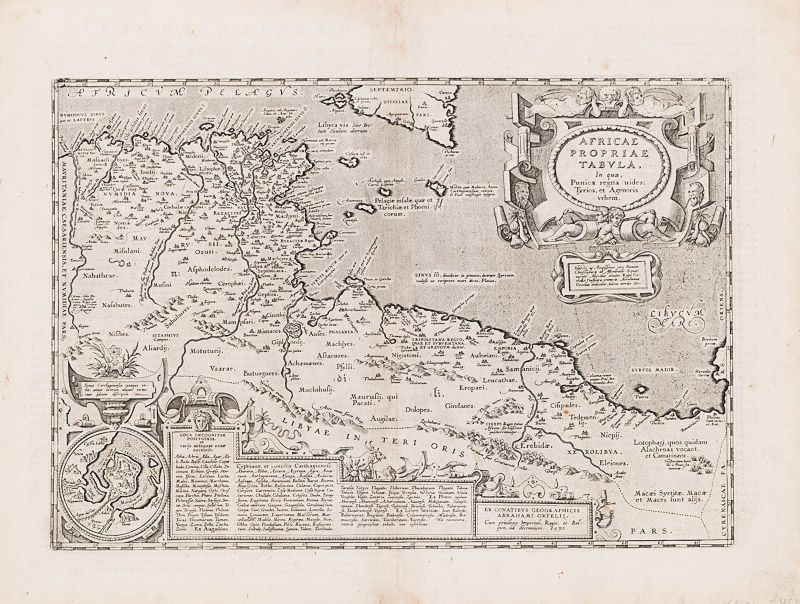 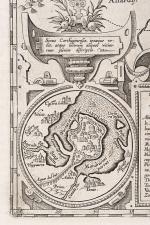