A richly detailed map showing the kingdom of Fez on the North African coast. From ‘L’Afrique’, one section of his great work, ‘Cartes Générales de Toutes les Parties du Monde’, published between 1654 and 1676. It shows Straits of Gibraltar, Kingdom of Algeria and Morocco. Engraved with mountain, forest and river features. Ornamental title cartouche and border inlaid with longitudinal and latitudinal details.

Nicolas Sanson (20 December 1600 – 7 July 1667) was a French cartographer, termed by some the creator of French geography, in which he’s been called the “father of French cartography.” The French school of Geography was unprecedented in its attention to precision and scientific detail and discarded much of the decorative embellishments of previous maps as irrelevant. From Sanson’s time in the second half of the seventeenth century until the latter part of the eighteenth century, French geographical conceptions were more influential than those put forward by any other nation. He was tutor to Louis XIII and Louis XIV. Sanson published over 300 maps. In 1692 Hubert Jaillot collected Sanson’s maps in an Atlas nouveau. (Wikipedia) 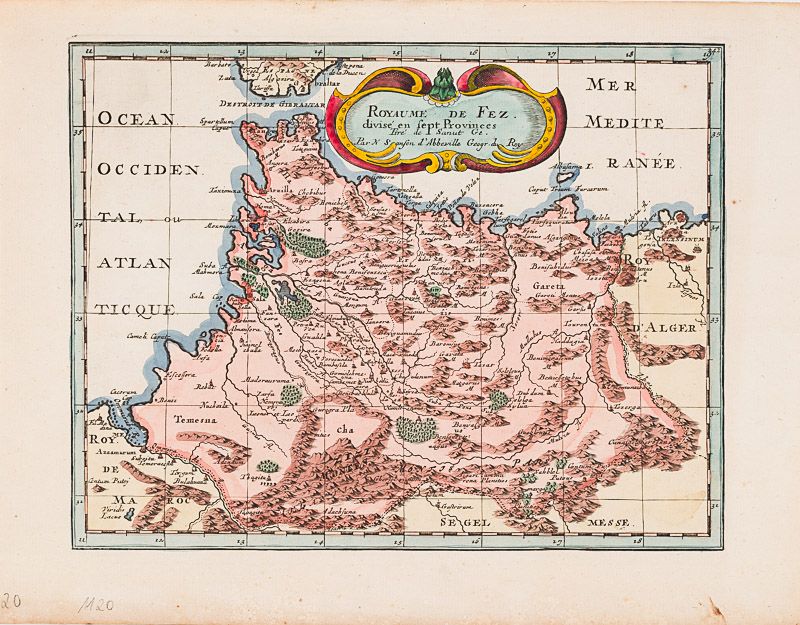