POLITICA, February, 1934. Large Octavo. 21 pages. Original Softcover in protective Mylar. Very good condition with only minor signs of external wear. The stunning association copy between two german sociel scientists in exile is a testament to their collegiality and friendship. With one annotation and some markings by Wolff. It is not clear if Wolff met Mannheim in London or if the offprint was sent to him. There is a note in ink by Wolff on the endpaper stating: “Columbus, May 13 ‘46”.

Karl Mannheim (born Károly Manheim, 27 March 1893 – 9 January 1947) was an influential German sociologist during the first half of the 20th century. He is a key figure in classical sociology, as well as one of the founders of the sociology of knowledge. Mannheim is best known for his book Ideology and Utopia (1929/1936), in which he distinguishes between partial and total ideologies, the latter representing comprehensive worldviews distinctive to particular social groups, and also between ideologies that provide outdated support for existing social arrangements, and utopias, which look to the future and threaten to transform a society.
After an unsuccessful attempt to gain a sponsor to teach philosophy in Heidelberg, Mannheim began work in 1924 under the German sociologist Alfred Weber, the brother of well-known sociologist Max Weber, and Emil Lederer. In 1926, Mannheim had his habilitation accepted by the faculty of social sciences, thus satisfying the requirements to teach classes in sociology at Heidelberg. Mannheim was chosen over other competitors for the post, one of whom was Walter Benjamin. From 1929-1933, he served as a professor of sociology and political economy at the Johann Wolfgang Goethe University Frankfurt am Main. Norbert Elias and Hans Gerth worked as his assistants from spring 1930 until spring 1933, with Elias as the senior partner. Greta Kuckhoff, who later became a prominent figure in the DDR, was his administrative assistant in Frankfurt, leaving early in 1933 to study at the London School of Economics (LSE) and prepare for Mannheim’s emigration there.
In 1933, Mannheim was ousted from his professorship under the terms of the anti-Semitic law to purge the civil service and was forced into exile. After fleeing the Nazi regime and settling in Britain, Mannheim became a lecturer in Sociology at the London School of Economics, under a program to assist academic exiles, until his death. (Wikipedia)

Kurt Heinrich Wolff (May 20, 1912 – September 14, 2003) was a German-born American sociologist. A major contributor to the sociology of knowledge and to qualitative and phenomenological approaches in sociology, he also translated from German and from French into English many important works by Georg Simmel, Emile Durkheim and Karl Mannheim. While carrying out anthropological field research in the 1940s in a small community in the southwestern United States, Wolff initially discovered, and began to articulate and to advocate, a new qualitative methodological approach for the study of human society. The approach later proved applicable in any field of inquiry or area of human endeavor. He called it “Surrender and Catch”. For more than 60 years, Wolff taught and wrote about this new approach.
Karl Mannheim was Wolff’s main intellectual influence, yet Wolff was certainly open to a variety of intellectual currents other than Mannheimian sociology. Wolffean thought can be traced to a number of different sources in world sociology, philosophy and anthropology. Like many Central European polymaths he was fluent in a number of languages including English, German, French, Italian and Spanish. He was the first translator and divulger in English of Georg Simmel and Karl Mannheim. (Wikipedia) 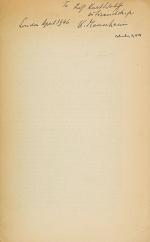 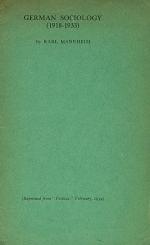 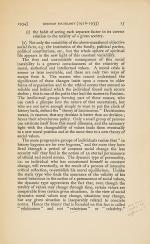