Charhadi, A Life Full of Holes.

A Life Full of Holes. A novel tape-recorded in Moghrebi and Translated into English by Paul Bowles.

Includes for example the following essays: The Journey to Menarbiyaa / At Mustapha’s Café / The House of the Nazarenes / Mseud etc.

Bowles, an American novelist, had become friends with Charhadi during his time in North Africa. The latter, being illiterate, spoke his story into Bowles’ tape-recorder in his native Moghrebi making this the first novel to ever be produced into that language.

Paul Frederic Bowles (December 30, 1910 – November 18, 1999) was an American expatriate composer, author, and translator. He became associated with Tangier, where he settled in 1947 and lived for 52 years to the end of his life.
Following a cultured middle-class upbringing in New York City, during which he displayed a talent for music and writing, Bowles pursued his education at the University of Virginia before making several trips to Paris in the 1930s. He studied music with Aaron Copland, and in New York wrote music for theatrical productions, as well as other compositions. He achieved critical and popular success with his first novel The Sheltering Sky (1949), set in what was known as French North Africa, which he had visited in 1931.

In 1947 Bowles settled in Tangier, at that time in the Tangier International Zone, and his wife Jane Bowles followed in 1948. Except for winters spent in Ceylon during the early 1950s, Tangier was Bowles’ home for the remainder of his life. He came to symbolize American immigrants in the city. Paul Bowles died in 1999 at the age of 88. His ashes are buried near family graves in Lakemont Cemetery, in upstate New York. (Wikipedia) 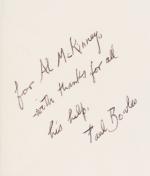 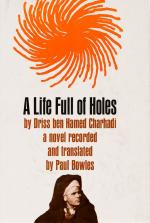 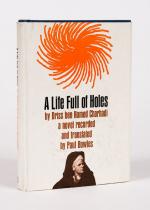