Culpin, Psychoneurosis of War and Peace.

Psychoneurosis of War and Peace. [Small Archive] Thesis Approved for the Degree of Doctor of Medicine in the University of London. [plus two presentation copies of other works of Culpin]

First Edition of the printed Thesis. Cambridge, Cambridge University Press, 1920. Octavo. 127 pages. Hardcover / Original publisher’s olive green cloth with black lettering on spine and frontcover. Very minor signs of bumping and very few, really only tiny signs of spotting to cover and edges. The binding and endpapers absolutely firm and especially clean inside. Very good or even better condition of this extremely scarce and important publication. [‘Culpin was among the first who realised that “shell-shock” and the deep effects of fear in war, such as disordered action of the heart, were emotional disturbances, more acute than the anxiety neuroses of peace’ – Source: Royal College of Surgeons] – The book comes together with two presentation copies from Millais Culpin: 1. Spiritualism and the New Psychology – An Explanation of Spiritualist Phenomena and Beliefs in terms of Modern Knowledge. London, Edward Arnold, 1920 Stamped: ‘Presentation Copy’ / 2.: Vintage Offprint from the Clinical Journal: ‘Psycho-Pathology in General Practice’ – ‘With the author’s compliments’.

Culpin was among the first who realised that “shell-shock” and the deep effects of fear in war, such as disordered action of the heart, were emotional disturbances, more acute than the anxiety neuroses of peace. His views were accepted and from 1917 till the end of the war he was a neurological specialist in the Army, and subsequently under the Ministry of Pensions. He did excellent work in this field, practising at Maghull near Liverpool, and collaborating with Drs Bernard Hart, T H Pear, and Aldren Turner. He wrote his thesis for the London doctorate on psychoneuroses of war. After his earlier experience in surgery and tropical medicine, Culpin proved a highly original and successful psychiatrist. He was appointed lecturer in psychoneurosis at the London Hospital in 1920, and built up a large private practice at 1 Queen Street. His methods were never spectacular, but he was a pioneer of dynamic psychology. (Source: Royal College of surgeons)

During World War 1 Culpin served in the Royal Army Medical Corps. As a military surgeon at Portsmouth and in France his experiences with shell-shocked soldiers led to an interest in war neuroses and its varied psychological manifestations. He published his research findings for his doctoral thesis as Psychoneuroses of War and Peace (Cambridge, 1920). In the 1920s he devoted his time to medical psychology, researched industrial health and lectured part time at the University of London. An eclectic thinker, with interests in psychoanalysis, temperament and abnormality, he was captive of no school, a loner, although well respected. In 1931 Culpin was appointed professor in industrial and medical psychology at the London School of Health and Tropical Medicine. Among his publications was a 1935 article for the Practitioner, ‘Neurasthenia in the Tropics’, which argued that white people could inhabit the tropics without ill effects. (Source: Australian Dictionary of Biography) 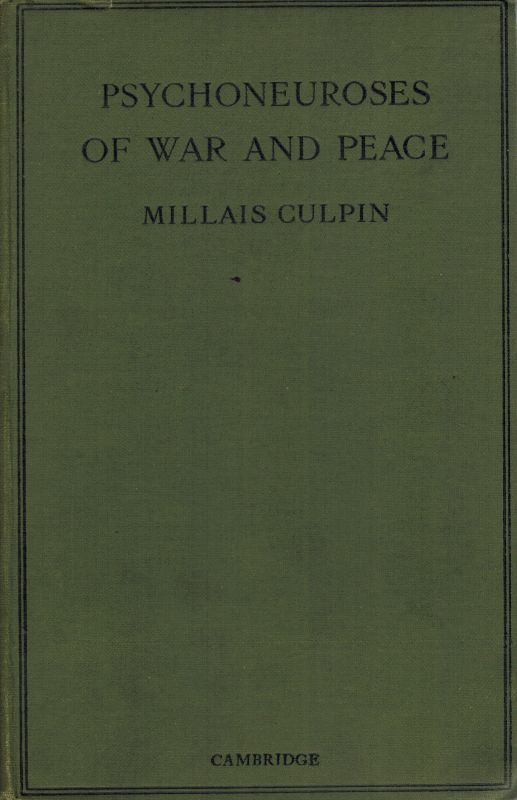 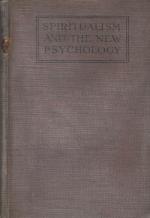 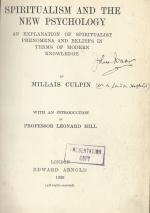 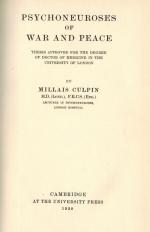