A Religious of Jesus and Mary. Life and Work of Mother Mary St. Ignatius, Claudi

A Religious of Jesus and Mary.

Life and Work of Mother Mary St. Ignatius, Claudine Thévent 1774-1837, Foundress of the Congregation of Jesus and Mary.

The Religious of Jesus and Mary form a Roman Catholic religious congregation of women dedicated to the education and service of the poor. It was founded at Lyon, France, in October 1818, by Claudine Thévenet, Mother Mary of St. Ignatius (1774-1837). She was canonized by Pope John Paul II in 1993 and her feast day is February 3.

This account of Claudine Thévenet’s life and legacy is divided into three parts. Part One, ‘Preparation of the Soil’, tells of Thévenet’s childhood, her family’s experiences during the French Revolution, her education and her early charitable work. Part Two, ‘Sowing the Divine Seed’, describes the rest of Thévenet’s life, outlines how she formed the congregation of the Sacred Hearts of Jesus and Mary and examines the order’s development during her lifetime. Part Three, ‘The Golden Harvest’, is an account of the growth of the congregation following Thévenet’s death in 1837. It covers the various branches formed throughout the world between 1837 and 1949, in countries including Canada, India, the USA, Mexico, Spain, Argentina, Ireland and Germany. 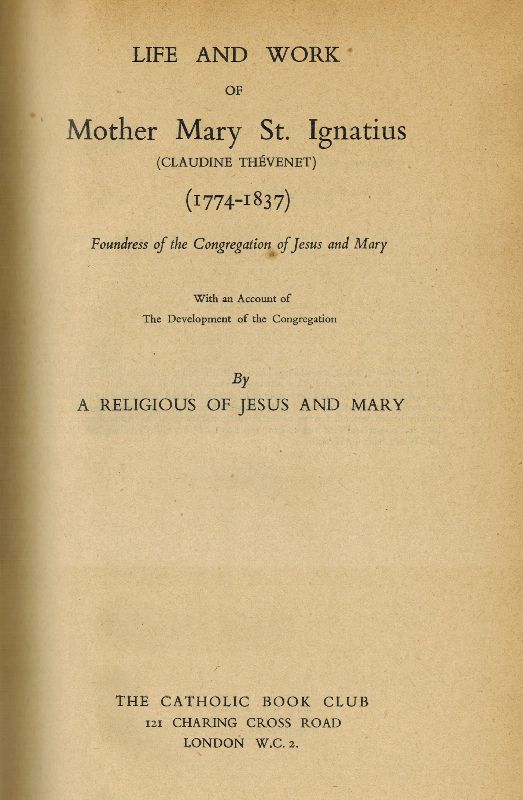