Manuscript Letter Signed [MLS] from Herbert Feigl to Ernest Nagel in which he looks foward to Nagel’s “Carus Lectures” and he says he will be “proud & honored to present you at Columbus”. Feigl talks about his upcoming decision on his presidential address and shares with Nagel his momentary topic being “Troubles of Transcendence”. Feigl also speaks about [Karl] Popper coming to Indiana and that he will “invite Gruenbaum, Salomon and other to discuss probabil., induction and if possible also logic of quantum mechanics”. Feigl also mentions “Popper’s intensity is remarkable” and “Feyerabend is a brilliant genius” etc. / Feigl closes by mentioning his success giving a guest speaker’s address to the American Philosophical Association in Washington (August 1958): “I had an audience of more than 3500 people – ‘Aristotle never had it so good’ said one of my friends’”.

[Minnesota], 1962. A 4. 4 pages on 2. Softcover. Very good condition with only minor signs of external wear. Signed: “As ever, cordially yours, Herbert”.

Herbert Feigl (December 14, 1902 – June 1, 1988) was an Austrian philosopher and a member of the Vienna Circle.
The son of a weaver, Feigl was born in Reichenberg (Liberec), Bohemia into a Jewish family and matriculated at the University of Vienna in 1922. He studied physics and philosophy under Moritz Schlick, the founder of the Vienna Circle, and received his doctorate in 1927 for the essay “Chance and Law: An Epistemological Analysis of the Roles of Probability and Induction in the Natural Sciences.” He published his first book, Theory and Experience in Physics, in 1929. During this time, became an active member in the Vienna Circle. He was one of the few Circle members (along with Schlick and Friedrich Waismann) to have extensive conversations with Ludwig Wittgenstein and Karl Popper.
In 1930, on an International Rockefeller Foundation scholarship at Harvard University, Feigl met the physicist Percy Williams Bridgman, the philosopher Willard Van Orman Quine, and the psychologist Stanley Smith Stevens, all of whom he saw as kindred spirits. In a 1931 paper with Albert Blumberg, “Logical Positivism: A New European Movement,” he argued for logical positivism to be renamed “logical empiricism” based upon certain realist differences between contemporary philosophy of science and the older positivist movement.
In 1931, Feigl married Maria Kaspar and emigrated with her to the United States, settling in Iowa to take up a position in the philosophy department at the University of Iowa. Their son, Eric Otto, was born in 1933. In 1940, Herbert Feigl accepted a position as professor of philosophy at the University of Minnesota, where he remained for 31 years. His close professional and personal relationship with Wilfrid Sellars produced many different collaborative projects, including the textbook Readings in Philosophical Analysis and the journal Philosophical Studies, which he and Sellars founded in 1949. In 1953, with a grant from the Hill Foundation, he established the Minnesota Center for Philosophy of Science. He was appointed Regents Professor of the University of Minnesota in 1967. He believed that empiricism is the only adequate philosophy for experimental science. Though he became a philosopher instead of a chemist, he never lost the perspective, and the scientific commonsense, of a practical scientist. He was one of the signers of the Humanist Manifesto and he was, in the paradigmatic sense, a philosopher of science. Feigl retired in 1971 and died of cancer on June 1, 1988 in Minneapolis. (Wikipedia)

Ernest Nagel (November 16, 1901 – September 20, 1985) was an American philosopher of science. Along with Rudolf Carnap, Hans Reichenbach, and Carl Hempel, he is sometimes seen as one of the major figures of the logical positivist movement.
Nagel was born in Nové Mesto nad Váhom (now in Slovakia, then Vágújhely and part of the Austro-Hungarian Empire). His mother, Frida Weiss, was from the nearby town of Vrbové (or Verbo). He emigrated to the United States at the age of 10 with his family, and became a U.S. citizen in 1919. He received a BSc from the City College of New York in 1923, and earned his PhD from Columbia University in 1931, with a dissertation on the concept of measurement. Except for one year (1966-1967) at Rockefeller University, he spent his entire academic career at Columbia, becoming a University Professor in 1967 until his retirement in 1970, after which he continued to teach. He was elected to the National Academy of Sciences in 1977.

His work concerned the philosophy of mathematical fields such as geometry and probability, quantum mechanics, and the status of reductive and inductive theories of science. His book The Structure of Science (1961) practically inaugurated the field of analytic philosophy of science. He expounded the different kinds of explanation in different fields, and was sceptical about attempts to unify the nature of scientific laws or explanations. He was the first to propose that by positing analytic equivalencies (or “bridge laws”) between the terms of different sciences, one could eliminate all ontological commitments except those required by the most basic science. He also upheld the view that social sciences are scientific, and should adopt the same standards as natural sciences.

Nagel wrote An Introduction to Logic and the Scientific Method with Morris Raphael Cohen, his CCNY teacher in 1934. In 1958, he published with James R. Newman Gödel’s proof, a short book explicating Gödel’s incompleteness theorems to those not well trained in mathematical logic. He edited the Journal of Philosophy (1939–1956) and the Journal of Symbolic Logic (1940-1946).
He died in New York. He had two sons, Alexander Nagel (professor of mathematics at the University of Wisconsin) and Sidney Nagel (professor of physics at the University of Chicago).
At a meeting of the executive council of the Committee for Skeptical Inquiry (CSI) in Denver, Colorado in April 2011, Nagel was selected for inclusion in CSI’s Pantheon of Skeptics. The Pantheon of Skeptics was created by CSI to remember the legacy of deceased fellows of CSI and their contributions to the cause of scientific skepticism. (Wikipedia) 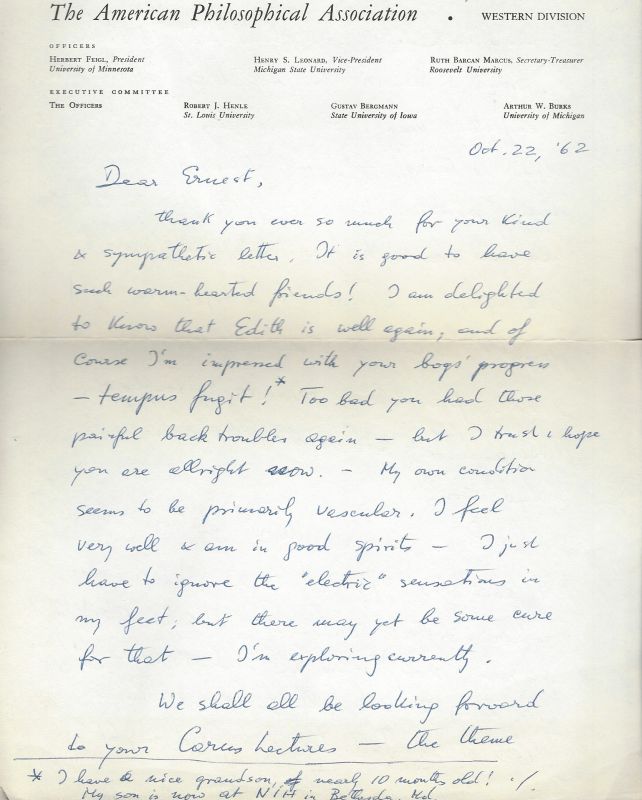