[Law 72 (iii)].
This very interesting detailed map shows Ireland divided into its four provinces of Munster, Connacht, Leinster and Ulster. The counties are also delineated: along the western seaboard Kerry and Mayo, north to Londonderry, and east to King’s County, Queen’s County and Wexford. The tips of Scotland, England and Wales can be seen along the map’s border. The map is crowded with regional and historic place-names: Muskerry, Ormond and Boylagh for example. The offshore islands, like Cork’s Cape Clear and Rathlin Islands, are named. Two of the Aran Islands lying off ‘Galloway Bay’ are named Killeny Island and Kilronan Island. The jagged coastal features are evident, with the headlands and bays all being identified: Three Castle Head and Baltimore Bay in the South to ‘Hoath Head’ near Dublin. The mountains, forests and rivers, lakes and cathedral towns/cities are depicted pictorially. Some of the water features look peculiar to modern eyes: the Boyne and Barrow appear to be the one river while Lough Erne takes on the appearance of a vast coastal inlet rather than the lake.
A large title cartouche is accompanied by equine and sylvan scenes crowned with the British Crown’s coat-of-arms.
In the lower corner a further highly detailed cartouche carried the coat-of-arms for the Kingdom of Ireland and is accompanied with rustic scenes alluding to the agricultural riches of the island. An inset box carries four ‘milliaria scales’ and map reference keys. A compass rose lies in the Irish Sea.

Tobias Lotter was a German publisher and engraver who married the daughter of the elder Matthaus Seutter in Augsburg. Largely under his own responsibility (but still under Seutter), Lotter created the ‘Atlas Minor’, which was created between 1740 and 1744. He engraved many of Seutters maps and eventually succeeded to the business in 1756, becoming one of the better-known cartographers in the eighteenth-century German School. After his death the business was carried on by his son, M.A. Lotter. (Wikipedia) 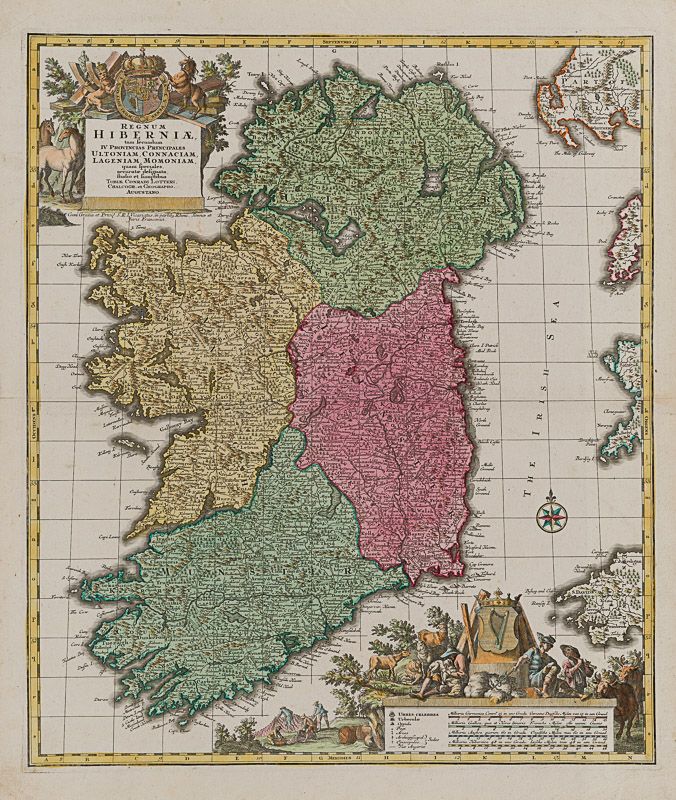 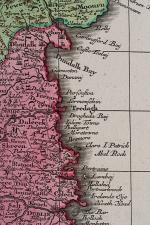 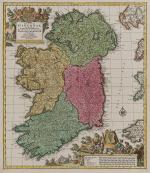