Embers – A New Play for Radio [This is the original BBC Double-LP-Recording in original BBC-wrappers].

First Edition. London, BBC Transcription Service, 1959. 4°. 2 Records with three sides recorded (Side One and Two: “Embers” by Samuel Beckett / Side 3: “Living Radio” – “A Discussion about the 1959 Italia Prize Awards”). In the original, Yellow BBC-Sleeve. Excellent condition with only minor signs of wear to the covers. Very Rare !

The Beckett who began to write radio plays in the mid-fifties was no stranger to the medium: in Roussillon, where he lived in hiding from 1942-45, the radio transmitter was the crucial information conduit for Resistance groups, and the BBC, which was to commission All That Fall (1956) and Embers (1959), its main source. Half a century later, as the Columbia Encyclopedia reminds us, radio is still primarily an information medium, a conductor of messages, whether news flashes, announcements of events, weather reports, and today the ubiquitous “sigalerts” that advise the driver about freeway conditions and traffic accidents even as they are taking place.

All the more reason, then, for the radio artist—and Beckett is surely one of the finest —to turn this information function, this relaying of messages from A to B, inside out. “Communication,” writes Michel Serres, “is only possible between two persons used to the same forms, trained to code and decode a meaning by using the same key.” (from: THE SILENCE THAT IS NOT SILENCE: ACOUSTIC ART IN SAMUEL BECKETT’S EMBERS by MARJORIE PERLOFF)

Embers is a radio play by Samuel Beckett. It was written in English in 1957. First broadcast on the BBC Third Programme on 24 June 1959, the play won the RAI prize at the Prix Italia awards later that year. Donald McWhinnie directed Jack MacGowran – for whom the play was specially written – as “Henry”, Kathleen Michael as “Ada” and Patrick Magee as “Riding Master” and “Music Master”. Robert Pinget translated the work as Cendres and “The first stage production was by the French Graduate Circle of Edinburgh, Edinburgh Festival, 1977.″
The most recent version of Embers was broadcast in 2006 on BBC Radio 3 and directed by Stephen Rea. The cast included Michael Gambon as Henry, Sinéad Cusack as Ada, Rupert Graves, Alvaro Lucchesi and Carly Baker. This production was rebroadcast on BBC Radio 3 on 16 May 2010 as part of a double bill with a 2006 production of Krapp’s Last Tape.
Opinions vary as to whether the work succeeds. Hugh Kenner calls it “Beckett’s most difficult work” and yet maintains that the piece “coheres to perfection,” John Pilling disagrees, remarking that Embers “is the first of Beckett’s dramatic works that seems to lack a real centre,” whereas Richard N. Coe considers the play “not only minor, but one of [Beckett’s] very few failures.” Anthony Cronin records in his biography of Beckett that “Embers met with a mixed reception [but tempers this comment by noting that] the general tone of English criticism was somewhat hostile to Beckett” at the time.
The author’s own view was that it was a “rather ragged” text. He said that it was “not very satisfactory, but I think just worth doing … I think it just gets by for radio.″
For all his personal reservations the play won the RAI prize in the 1959 Prix Italia contest, not, as has been often reported, “the actual Prix Italia … which went to John Reeve’s play, Beach of Strangers.” (Wikipedia) 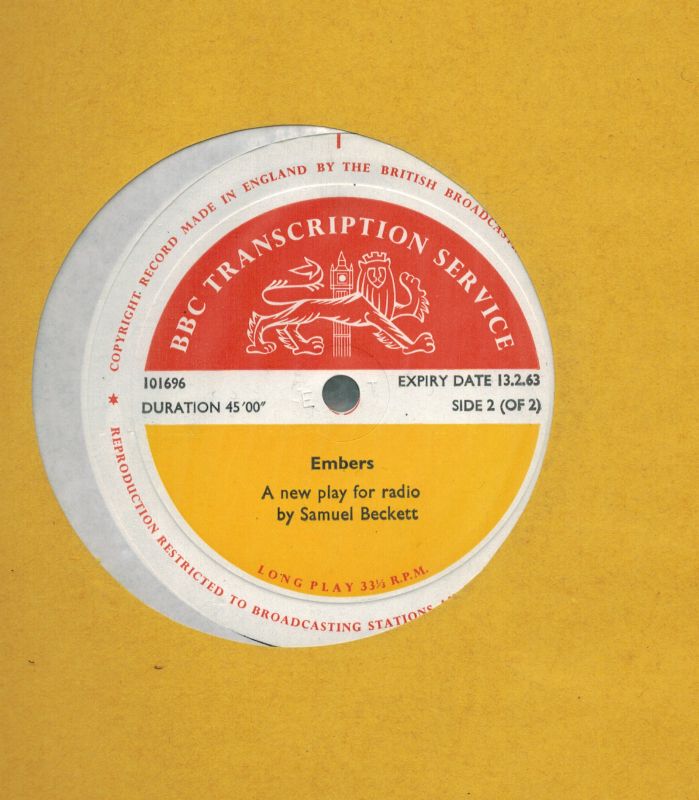