Includes, for example, the following: Ibn Rashid’s Town – Superstitious fears of the Arabs. Exorcists / Life in Hayil – Their nomad-like ignorance of the civil world / Depart from Hayil: Journey to Kheybar – Adventure in the Desert / The Medina Life at Kheybar – Amm Mohammed’s Kurdish family – A Beduin marksmean slain – Spitting of some account in their medicine / The Shammar and Harb Deserts in Nejd / Aneyza – Ancient man in Arabia / The Christian Stranger Driven from Aneyza; and Recalled / Wars of Aneyza. Kahtan Expelled from El-Kasim / Tayif. The Sherif, Emir of Mecca / Wady Fatima / Geology of the Peninsular of the Arabs / Index and Glossary of Arabic Words etc.

Charles Montagu Doughty, (1843 – 1926), British traveller and writer who is widely regarded as one of the greatest of all Western travellers in Arabia. Doughty attended the Universities of London and Cambridge, after which he travelled widely in Europe, Egypt, the Holy Land (Palestine), and Syria. He began his journey to northwestern Arabia at Damascus in 1876 and proceeded southward with pilgrims headed for the hajj at Mecca. Along the way he studied monuments and inscriptions left by the ancient Nabataean civilization. His observations were published by Ernest Renan. On the latter part of his journey, he made his most important geographical, geological, and anthropological observations. (Encylopedia Briannica)
Doughty is best known for his 1888 travel book Travels in Arabia Deserta, a work in two volumes that, although it had little immediate influence upon its publication, slowly became a kind of touchstone of ambitious travel writing, one valued as much for its language as for its content. T. E. Lawrence rediscovered the book and caused it to be republished in the 1920s, contributing a laudatory introduction of his own. Since then, the book has gone in and out of print.
The book is a vast recounting of Doughty’s treks through the Arabian deserts, and his discoveries there. It is written in an extravagant and mannered style, largely based on the King James Bible but constantly surprising with verbal turns and odd inventiveness. (Wikipedia) 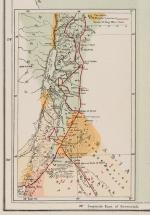 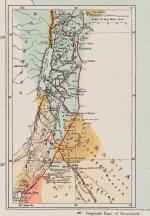