Steuart, An Inquiry into the Principles of Political Economy: Being an Essay on

An Inquiry into the Principles of Political Economy: Being an Essay on the Science of Domestic Policy in Free Nations. In which are particularly considered Population, Agriculture, Trade, Industry, Money, Coin, Interest, Circulation, Banks, Exchange, Public Credit and Taxes.

First Edition. Two Volumes (complete set). London, Printed for A. Millar and T. Cadell, in the Strand, 1767. Quarto (24.5 cm x 30cm). Collation complete: Volume I: Title, XV, Errata, 12 unnumbered pages, 639 pages plus “A Table of Coins” to the rear of Volume I / Volume II: Title, 14 unnumbered pages, 646 pages plus “A Table of Coins – shewing the Quantity of Fine Metal contained in them” to the rear of Volume II, followed by 12 unnumbered pages of Index and another Errata-leaf. Recent Hardcover / Stunning half-leather Quarto Volumes in Collector’s Condition, tight and square, and beautifully bound by two english masterbinders with marbled-paper-covered-boards, using the original spinelabels of the former 18th century-bindings. Bookplates to pastedowns. While the true first edition of Adam Smith’s “Inquiry into the Nature and Causes of the Wealth of Nations” always seems to be somehow available on the international market, the Magnus Opus of Smith’s precursor, Sir James Steuart, is not only extremely scarce, but also very hard to find at all. While we are here describing the very few minor faults in detail because this is an extremely valuable item, it must be stressed that the bindings are mint and the bookblocks of the set are in very good+ or rather in near Fine condition ! This first edition-set is not only wide-margined but also on excellent paper with very minor signs of foxing to the Table of Coins and Index. Some signs of mild foxing and the tiniest of wormhole-damage of 2-3 mm to the inner margins of the content-pages of Volume I. Besides some annotations and markings in erasable pencil, the text is clean and in fantastic condition. Very minor signs of a faded dampstain to very few pages (visible but unimportant). One of the rarest classics of economic history by “the founder of economic science” (Encyclopædia of the Social Sciences). This set belongs in every serious Economics Collector’s cabinet, next to every first-edition-set of Adam Smith’s work. From the library of Daniel Conner (Connerville / Manch House), with his Exlibris / Bookplate to pastedown.

[Important References about Sir James Steuart’s landmark publication can be found in these bibliographies and monographs: Goldsmith/Kress – Library of Economic Literature / Henry Higgs – Bibliography of Economics, 1751 – 1775 / John Ramsay McCulloch – A Dictionary, Practical, Theoretical, and Historical, of Commerce and Commercial Navigation / Mark Blaug – Great Economists Before Keynes: An Introduction to the Lives and Works of One Hundred Great Economists of the Past and in Joseph A. Schumpeter’s ‘History of Economic Analysis’]

Sir James Steuart’s 1767 Inquiry into the Principles of Political Economy is perhaps the first, fully-fledged economics treatise. Although often regarded as part of the Scottish Enlightenment which produced David Hume and Adam Smith, Steuart’s economics hark back to the earlier Mercantilist era. More accurately, while on the Continent, Steuart had imbibed the sophisticated Enlightenment Mercantilism that was in the air — particularly, German Neo-Cameralism — which combined a legal-statist approach with a “natural” approach to economics. Although a promoter of old fashioned export subsidies and import tariffs, Steuart added several elements that tied this in with a more general theory of economic development. Unlike the old Mercantilists, he recognized Cantillon’s “population-subsistence” dynamics. He also introduced the concept of diminishing returns to land. Steuart juggled two interesting theories of price — a long-run, quasi-Marxian labor theory of value and a short-run “demand-and-supply” theory. Indeed, Steuart was among the first to introduce the term “equilibrium”. Thus, Steuart was an important forerunner of both the Classical and Neoclassical schools in many respects. Steuart also provided one of the more able statements of the real bills doctrine of money. Steuart followed the Inquiry up with his 1769 Considerations on the county of Lanark (under pseudonym . “Robert Frame”), where he explains and uses the mechanics of a supply-and-demand mechanism in markets.

Adam Smith’s (1776) attacks on Mercantilism were mainly directed against Steuart (even though the latter was not mentioned by name). Steuart was translated into French in 1789-90, and used by the revolutionaries to argue for certain reforms. However, Steuart’s economics were lauded by Karl Marx and he became something of a darling to the German Historical School.

Steuart’s 1767 Inquiry was not a best-seller – but it was well-received by critics, and was part of the reason he was finally granted a full pardon on December 23, 1771 (curiously, sixty years earlier, another Scottish outlaw, John Law, had also attempted a “practical” economic treatise in the hopes of earning himself a pardon – albeit Law did not succeed). In 1772, at the request of the British East India Company, Steuart undertook a study on the scarcity of coinage in EIC-owned Bengal. In 1773, Steuart added to his wealth the inheritance of the substantial lands of Goodtrees from a defunct Denham branch of the family, and changed his name to Steuart Denham as a condition.

Steuart died on November 26, 1780, from a toe infection and was buried in a family vault at Cambusnethan in Lanarkshire. His fame, though tarnished by Smith, was still great enough for the dedication of a cenotaph memorial tablet to Steuart in Westminster Abbey (as far as I can tell, the only economist there). His collected works were compiled by his son, Lt. James Stewart, in 1805.
(Source: HET – The History of Economic Thought – compiled by Gonçalo L. Fonseca) 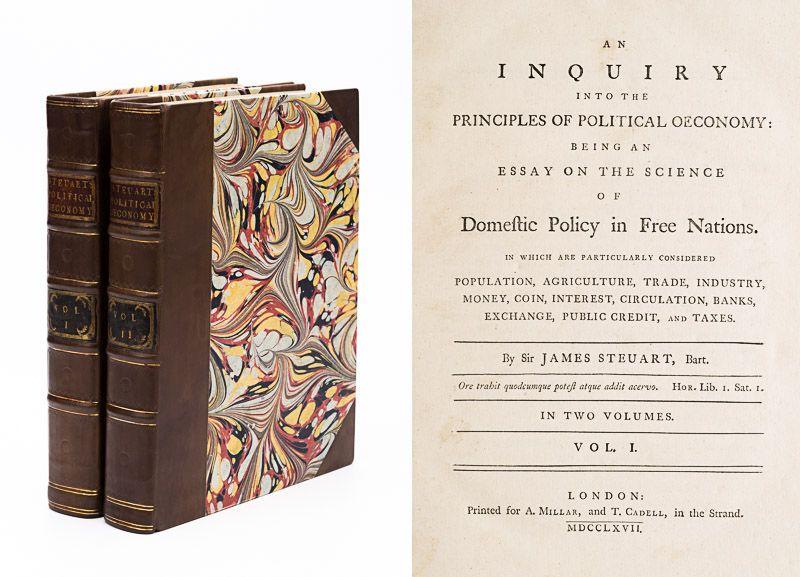 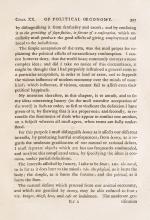 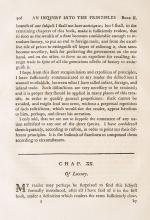 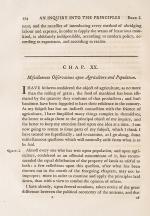 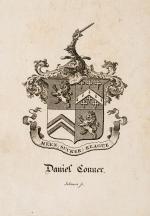 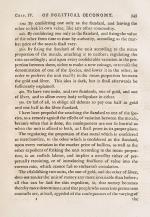 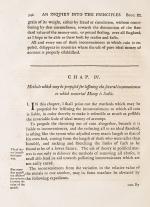 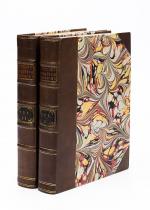 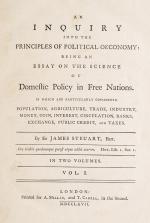 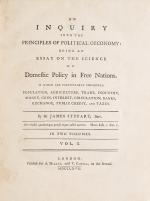 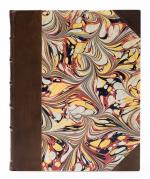 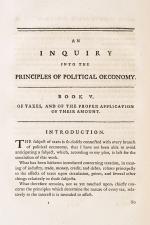 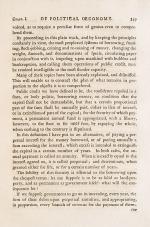 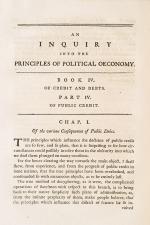 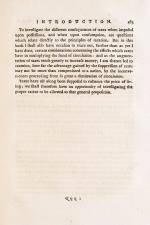 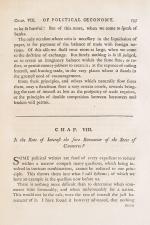 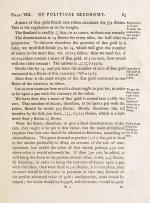 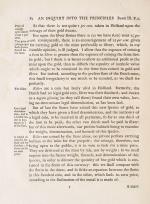 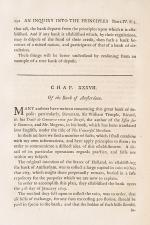 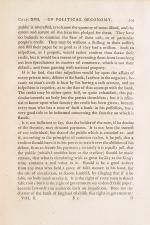 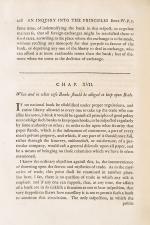