[Pope’s Homer] The Iliad of Homer / The Odyssey of Homer / [Stunning 18th century set of all 20 Volumes of Pope’s Works in their original, contemporary bindings with 26 full-page-engravings plus 1 large, folded Map of Greece, 1 large, folded illustration of the Battle of Troy, 1 folded illustration of Achilles Shield as well as 84 text-vignettes illustrating the Iliad and Odyssey / The engravings also include a frontispiece – portrait of Alexander Pope after a painting of Jean-Baptiste van Loo]. The set of Pope’s Homer is followed by “The Works of Pope – In Nine Volumes, Complete. With his last corrections, additions and Improvements: Together with the Commentary and Notes of his Editor”.

20 Volumes (complete set of Pope’s Homer and Pope’s Works). London, Charles Rivington / A.Millar and others, 1760 – 1766. Octavo (14 cm x 21 cm). Collation of Pope’s Homer and Pope’s Works follows here: Collation of Pope’s Homer: Volume One includes: an Essay on Homer by Pope, Book I and Book II of the Iliad with two Frontispiece – illustrations, CLI, 175 pages with five Text-Vignettes and one folded map of Greece [and “Phrygia” / Kingdom of Muska] / Volume Two includes: An Essay on Homer’s Battles, Book II – Book VII of the Iliad, 341 pages with five Text-Vignettes and with a stunning, folded map of Troy and the battlefield: “Troja cum Locis pertingentibus” / Volume Three includes: Book VIII to Book XII of the Iliad with ten Text-Vignettes on 304 pages / Volume Four includes: Book XIII to Book XVI of the Iliad with eight Text-Vignettes on 301 pages / Volume Five includes: Book XVII to Book XXI of the Iliad with ten Text-Vignettes and a stunning, folded engraving, showing the Shield of Achilles as described in Homer’s 18th Ilias, [added is a multi-page “Observation on the Shield of Achilles”], on 287 pages / Volume Six includes: Books XXII to Book XXIV of the Iliad with five Text-Vignettes, a two-page Epilogue for the Iliad by Alexander Pope [dated 1720], and “A Comparison between the Games of Homer and Virgil”, an “Index of Persons and Things”, “A Poetical Index to Homer’s Iliad”, an “Index of Arts and Sciences” with “a View of Homer’s Theology” [outlined in the Index are also Music, Geography, Physick, Military Art Astronomy, Architecture, Gymnastics, Agriculture and Rural Arts, Policy, Oratory etc.], on 212, [75], pages including the sectioning of Allegorical Fables in Homer, Allegorical and Fictitious Persons in Homer, The Marvellous or Supernatural Fictions in Homer, Characters of the Gods of Homer, as acting in the Physical or Moral capacities of those Deities [Jupiter, Juna, Apollo, Mars, Minerva, Venus, Neptune, Vulcan], Characters of the Heroes Achilles and Aeneas, Agamemnon, Ajax, Diomed, Hector, Idomeneus Menelaus, Nestor, Priam, Paris, Patroclus, Sarpedon, Ulysses and much more // Volume VII [being Volume One of The Odyssey]: Includes “A General View of the Epick [sic] Poem and of the Iliad and Odyssey, extracted from Bossu” and Book I to Book IV of the Odyssey with eight Text-Vignettes and some minor wormhole-damage decreasing from the titlepage to the end of the Volume, 240 pages / Volume VIII [being Volume Two of the Odyssey]: Includes Book V to Book IX of the Odyssey with nine Text-Vignettes on 272 pages / Volume IX [being Volume Three of the Odyssey]: Includes Book X to Book XIV of the Odyssey with nine Text-Vignettes on 316 pages / Volume X [being Volume Four of the Odyssey]: Includes Book XV to Book XIX of the Odyssey with eight Text-Vignettes on 277 pages with a faded dampstain to the core of the lower book-block / Volume XI [being Volume Five of the Odyssey]: Includes Book XX to Book XXIV of the Odyssey with an Epilogue [″Postscript”] by Alexander Pope, an Index to the Odyssey and an Addenda: “Homer’s Battle of the Frogs and Mice – by Mr.Archdeacon Parnel, corrected by Mr.Pope” with eight Text-Vignettes on 280, [20], 28 pages [one layer ever so slightly loosened, but still attached to the book-block// Collation of Pope’s Works: Volume I includes: Juvenile Poems / Pastorals etc. with Frontispice, Advertisement, Preface, [XLV], 288 pages with an additional two plates [Engravings for “Windsor Forest” and “The Rape of the Lock”] Faded dampstain to the illustration for “The Rape of the Lock” / Volume II includes: Pope’s Translations and Imitations, 272 pages with four plates, illustrating “Eloisa to Abelard”, “The Temple of Fame”, “January and May”, “The Wife of Bath” / Volume III includes: Moral Essays, Essays on Man and Essay on Satire, 362 pages, illustrated with eight plates of which one is detached and loosely inserted in its dedicated space verso page 203 / Volume IV includes: Satires and Epistles of Horace imitated, Satires of Dr.John Donne, etc., 336 pages, illustrated with three plates / Volume V includes the Dunciad in Four Books with a Frontispiece and five additional engravings (of which one engraving only covers half a page), 345 pages plus 14 pages of an Index / Volume VI includes Pope’s Miscellaneous Pieces in Verse and Prose, [including his Prefaces to Homer and Shakespeare], with 407 pages and one engraving faded dampstain to lower bookblock) / Volume VII includes the first Volume of Alexander Pope’s Letters, XXXII, 367 pages / Volume VIII includes the second Volume of Alexander Pope’s Letters, XI, 280 pages / Volume IX includes the third [and last] Volume of Alexander Pope’s Letters [including the 88 (!) letters to and from Jonathan Swift] XV, 372 pages //. Original Hardcover / 18th century full calf with gilt lettering and ornament on spine. Condition of the eleven Volumes of Pope’s Homer: An original set of all eleven volumes of Homer with their original patina, unaltered in 18th-century-condition and with very few Volumes with minor damage to the spines and some of the leather slightly rubbed and minimally loosened from the boards. Minor, faded dampstain to one Volume and decreasing wormhole-damage to one other Volume. All Volumes firm with one layer inside the Odyssey ever so slightly loosened. All illustrations, maps, folded engravings and allegorical Text-Vignettes within Pope’s Homer present and in excellent condition. Very good condition with only minor signs of external wear. / Condition of the additional set of nine Volumes of Pope’s works: Overall very good with all Volumes firm but two Volumes with some minor damage to the spines (Volumes I and IV). Occasionally some dampstaining in three of the nine Volumes but overall this nine volume-set of Poepe’s works is in still very good- condition with some pages being a little dusty and only one of the 24 engravings/ illustrations detached and loosely inserted. One of the rare opportunities to buy Alexander Pope’s Homer and collected works in an entire, original 18th century private library-set. From the collection of Daniel Conner, with his Exlibris / Bookplate to the pastedown //

Alexander Pope (21 May 1688 – 30 May 1744) is regarded as one of the greatest English poets, and the foremost poet of the early eighteenth century. He is best known for his satirical and discursive poetry, including The Rape of the Lock, The Dunciad, and An Essay on Criticism, as well as for his translation of Homer. After Shakespeare, Pope is the second-most quoted writer in the English language, per The Oxford Dictionary of Quotations, some of his verses having even become popular idioms in common parlance (e.g., Damning with faint praise). He is considered a master of the heroic couplet.
Alexander Pope had been fascinated by Homer since childhood. In 1713, he announced his plans to publish a translation of the Iliad. The work would be available by subscription, with one volume appearing every year over the course of six years. Pope secured a revolutionary deal with the publisher Bernard Lintot, which earned him two hundred guineas (£210) a volume, a vast sum at the time.
His translation of the Iliad appeared between 1715 and 1720. It was acclaimed by Samuel Johnson as “a performance which no age or nation could hope to equal” (although the classical scholar Richard Bentley wrote: “It is a pretty poem, Mr. Pope, but you must not call it Homer.”) Translation of the Odyssey: Encouraged by the success of the Iliad, Bernard Lintot published Pope’s five-volume translation of Homer’s Odyssey in 1725 and 1726. For this work, Pope collaborated with William Broome and Elijah Fenton: Broome translated eight books (2, 6, 8, 11, 12, 16, 18, 23); Fenton four (1, 4, 19, 20); and Pope the remaining 12. Broome provided the annotations. Pope attempted to conceal the extent of the collaboration, but the secret leaked out. It did some damage to Pope’s reputation for a time, but not to his profits. Leslie Stephen considered Pope’s portion of the Odyssey inferior to his version of the Iliad, given that Pope had put more effort into the earlier work – to which, in any case, his style was better suited. (Wikipedia) 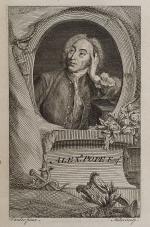 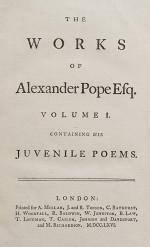 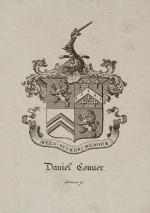 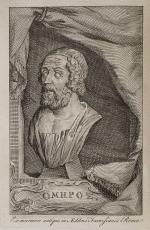 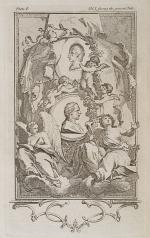 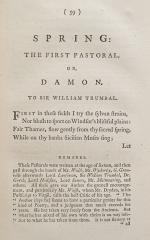