Grose, The Antiquities of Ireland.

First Edition (Original – Vintage – 18th century Edition). Two Volumes (complete set). Dublin, Printed for S.Hooper, 1791. Large Octavo (19.5 cm x 27.5 cm). Pagination / Collation: Volume I: Frontispiece, engraved titlepage, XL, 88, VIII pages, interleaved with 135 plates (as called for) / Volume II: Frontispiece, engraved titlepage, XV, 98, VI pages, interleaved with 125 plates (as called for). Hardcover / Modern, beautifully and professionally restored and rebacked original 18th-century,irish bindings with gilt orament to boards and new lettering and ornament on spine. During the restoration, the original endpapers were retained. Several plates with a faded dampstain, only one plate (planche 79 in Volume II) with a minor tear. A wonderful, magnificent set with some patina to pages and plates. The plates overwhelmingly beautiful and most of them in excellent condition.

The author, Francis Grose, famously befriended Robert Burns and toured Scotland with him to subsequently publish “The Antiquities of Scotland”. While on an expedition to Ireland to collect antiquarian material, Grose died in Dublin, at the house of Horace Hone, of an apoplectic stroke. He was buried on 18 May 1791, at Drumcondra cemetery. His nephew Daniel and a Dr. Edward Ledwich, who had already published a book on Irish antiquities, completed the final volume of Grose’s Antiquities of Ireland in 1791. (Wikipedia)

Plates include for example in Volume One: Pagan Antiquities at New Grange [Newgrange] in the County of Meath / Cromlech at Tobinstown (County Carlow) / Religious Orders / Military Antiquities / 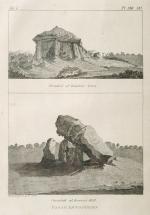