“The Crisis” – [Important collection on the Great Lincoln – Douglas Debate in 1858 – Including the First Edition of “The Crisis”, the ultimate association-copy, inscribed by american novelist Winston Churchill to Robert Roberts Hitt, shorthand note-taker during the Great Debates of 1858 and personal friend of Abraham Lincoln, with a lengthy inscription by Churchill: “My Dear Mr. Hitt – Please forgive me for nagging you with this book – think dismissed. I take this opportunity of expressing my gratitude for the help you gave me. And I hope that my portrait of the Great American [Abraham Lincoln] may not offend you, who knew him so well”. Hitt comments with a full-page shorthand-notation in the front of the book, included are letters exchanged between Churchill and Hitt: 3 autographed letters (signed by Churchill) 1 typed letter (signed by Churchill). The letters focus on Churchill questioning Hitt especially on the Freeport debate and Lincoln’s mood the night before. He introduces the plot of the book “The Crisis” to Hitt and questions the authenticity versus what Hitt recalls of that day. Churchill schedules a visit with Hitt to interview him etc. etc. / Also included are contemporary newspaper-clippings which Hitt loosely inserted, one original Union Presidential Ticket (Darke County, Ohio), for President Abraham Lincoln of Illinois, for the Election on November 8, 1864 as President and for Vice President Andrew Johnson / also included is one original National Democratic Ticket for his opponent in Darke County, George B. McClellan for President and for Vice President, George H. Pendleton / Also included: Roy S. Younglove’s personal copy of the important publication on the Lincoln – Douglas Debates of 1858 by Edwin Erle Sparks (see plenty of images on this collection on our website) / Also included: Two offprints on the Lincoln-Douglas Debates: 1: Frederick Trevol Hill – The Lincoln-Douglas Debates – Fifty Years After – A New Account of the Forensic “Seven Days” Battle (Offprint from “The Century Magazine, 1908”/ 2. Noah Brooks – Lincoln’s Reelection – Lincoln’s Second Inauguration – The Beginning of Lincoln’s Second Term – The President’s Shrewdness at Hampton Roads (Offprint) / 3. Reprint of “″A Reception by President Lincoln” by C. van Santvoort].

New York / Springfield / St.Louis / Mount Morris / Windsor (Vermont), The Macmillan Company / Illinois State Historical Library, 1900 – 1908. Octavo. Pagination of “The Crisis”: Frontispiece – Illustration, IX, 522, [2] pages with Illustrations by Howard Chandler Christy / Pagination of “The Lincoln-Douglas Debates of 1858” by Edwin Erle Sparks: Portrait-Frontispiece of Abraham Lincoln, XI, 627 pages with many photographs. Original Hardcover. Excellent condition with some minor signs of wear only. The newspaper-clippings, the letters and the Presidential Election Tickets are all preserved in protective sheets. The newspaper-clippings are a little brittle. One of the letters is torn. The books and the inscription and the other manuscript letters and the typed letter are all in excellent condition. A very rare collection on American History and the origins and History of campaigning in american elections. From the private collection of Robert Roberts Hitt, one of Lincoln’s employee’s and personal friends during his legal days in Chicago. Hitt was notably mentioned, introduced and honored with a portrait in the publication on the Great Debate by Edwin Erle Sparks (see portraits and more images on our website).

“The Crisis” is a historical novel published in 1901 by the American novelist Winston Churchill. It was the best-selling book in the United States in 1901. The novel is set in the years leading up to the first battles of the American Civil War, mostly in the divided state of Missouri. It follows the fortunes of young Stephen Brice, a man with Union and abolitionist sympathies, and his involvement with a Southern family.
Set in the author’s home town of St. Louis, Missouri, the site of pivotal events in the western theater of the Civil War, with historically prominent citizens having both Northern and Southern sympathies. St. Louis was also the pre-war home of both Ulysses Grant and William T. Sherman, each of whom is depicted in the book.

Romantic tension develops between the four main characters: one, Virginia “Jinny” Carvel, the fashionable daughter of Comyn Carvel, a southern gentleman of the old school; another, Clarence Maxwell Colfax, her n’er-do-well cousin who becomes a stalwart cavalier in the Southern cause in an effort to win Jinny’s approval; the third, Stephen A. Brice, an earnest young lawyer from Boston who antagonizes Virginia by his zeal for Abraham Lincoln’s cause; and the fourth, Eliphalet Hopper, a hard-working clerk with ambitions to advance himself both financially and socially.

The crisis of the title is provoked by Abraham Lincoln’s opposition to the extension of slavery, and the power of his personal integrity to win people to his cause, including the young lawyer Brice, who becomes a devoted admirer and proponent following a personal interview on the eve of the Freeport debate between Lincoln and Stephen Douglas. This meeting depicts Lincoln’s determination to advance the cause of freedom through the possible (and likely) sacrifice of his own political ambitions, and is related with a very believable combination of rustic humor and political acumen on Lincoln’s part.

The events prior to Lincoln’s nomination and his eventual election to the Presidency elicit different reactions among the citizens of St. Louis, from the determined antipathy of the Southern sympathizers, to the equally determined patriotism of the population of German immigrants who have fled from their homeland and whose devotion to liberty has caused them to transfer their allegiance to the ideal of American democracy. One of them is Stephen’s fellow lawyer, Carl Richter, who bears the scar of a duel fought with broadswords between himself and an arrogant German noble; a duel based on an actual incident in Berlin.

Although the personal rivalries follow an almost soap opera style formula, the overall events of the war from the perspective of St. Louis and the Western theater of war are dramatically depicted with well-researched authenticity, and both Grant and Sherman are depicted as having a personal involvement in the lives of the main characters. A pivotal moment in the heroine’s life is presented through her transformation from being self-centered and self-absorbed to becoming self-sacrificing and dedicated to easing the suffering of those around her. This is represented as a Christian metaphor for the way that God uses challenges to mould a person’s character.

In the end, Virginia and the young lawyer find themselves meeting Lincoln together to try to save her cousin’s life after Clarence is condemned as a Southern spy, and together they experience Lincoln’s power to bring about a reconciliation between them, just before the national reconciliation which Lincoln proposed between the North and the South would be aborted by John Wilkes Booth’s bullet.

This novel is a story about Abraham Lincoln in the same sense that the novel Ben Hur is “a tale of the Christ,” in that Lincoln only appears twice, for a total of about two dozen pages, but his philosophy is a dynamic presence throughout the story. The author portrays Lincoln as being the sacrifice America had to pay to redeem it from the sin of slavery. In his post-script, the author offers this justification for supporting Lincoln’s point of view, “Lincoln loved both the South and the North”.

The book received good reviews, and was the best-selling book in the United States for 1901, according to The Bookman magazine.
The book was adapted into a silent film of the same name in 1916. (Wikipedia)

The Lincoln–Douglas debates (also known as The Great Debates of 1858) were a series of seven debates between Abraham Lincoln, the Republican Party candidate for the United States Senate from Illinois, and incumbent Senator Stephen Douglas, the Democratic Party candidate. Until the 17th Constitutional Amendment of 1913, senators were elected by their respective state legislatures, so Lincoln and Douglas were trying to win control of the Illinois General Assembly for their respective parties.
The debates were designed to generate publicity: the first examples of what later would be called media events. For Lincoln, they were an opportunity to raise both his national profile and the burgeoning Republican Party, while Douglas sought to defend his record—especially his leading role in the doctrine of popular sovereignty and its incarnation in the Kansas-Nebraska Act of 1854. The candidates spoke in each of Illinois’s nine congressional districts. Both candidates had already spoken in Springfield and Chicago within a day of each other, so they decided that their joint appearances would be held in the remaining seven districts. Each debate lasted around three hours; one candidate spoke for 60 minutes, followed by a 90-minute response and a final 30-minute rejoinder by the first candidate. The candidates alternated speaking first. As the incumbent, Douglas spoke first in four of the debates. They were held outdoors, weather permitting, from about 2 to 5 p.m. There were fields full of listeners.

The debates focused on slavery: specifically, whether it would be allowed in the new states to be formed from the territory acquired through the Louisiana Purchase and the Mexican Cession. Douglas, as part of the Democratic party, held that the decision should be made by the residents of the new states themselves rather than by the federal government (popular sovereignty). Lincoln argued against the expansion of slavery, yet stressed that he was not advocating its abolition where it already existed.

Never in American history had there been newspaper coverage of such intensity. Both candidates felt they were talking to the whole nation. New technology was readily available: railroads, the telegraph, and Pitman shorthand, at the time called phonography. The state’s largest newspapers, from Chicago, sent phonographers (stenographers) to report complete texts of each debate; thanks to the new railroads, the debates were not hard to reach from Chicago. Halfway through each debate, runners were handed the stenographers’ notes. They raced for the next train to Chicago, handing them to riding stenographers who during the journey converted the shorthand back into words, producing a transcript ready for the Chicago typesetter and for the telegrapher, who sent it to the rest of the country (east of the Rockies) as soon as it arrived. The next train brought the conclusion. The papers published the speeches in full, sometimes within hours of their delivery. Some newspapers helped their own candidate with minor corrections, reports on the audience’s positive reaction, or tendentious headlines (″New and Powerful Argument by Mr. Lincoln—Douglas Tells the Same Old Story”). The newswire of the Associated Press sent messages simultaneously to multiple points, so newspapers all across the country (east of the Rocky Mountains) printed them, and the debates quickly became national events. They were republished as pamphlets.

Douglas was re-elected by the Illinois General Assembly, 54–46. The publicity made Lincoln a national figure and laid the groundwork for his 1860 presidential campaign. As part of that endeavor, Lincoln edited the texts of all the debates and had them published in a book. It sold well and helped him receive the Republican Party’s nomination for president at the 1860 Republican National Convention in Chicago. (Wikipedia) 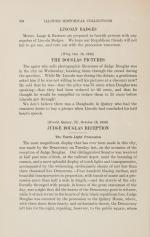 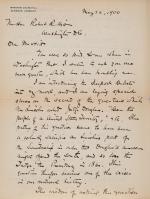