First Edition. New York, Harper & Brothers, 1960. 13,5 cm x 19,5 cm. 71 pages. Original Hardcover with dustjacket in protective Mylar. Very good condition with only minor signs of external wear. Slight traces of foxing on the pages. Signed and beautifully inscribed by Gwendolyn Brooks for the american poet Peter Viereck: “For Peter Viereck, one of America’s greatest poets: one of the world’s kindest men ! – Sincerely, Gwendolyn Brooks – March 25, 1960”. Included is also a typed note, signed, from Gwendolyn Brooks to Peter Viereck regarding their upcoming meeting at the Poetry Center in New York.

Gwendolyn Elizabeth Brooks (June 7, 1917 – December 3, 2000) was an American poet, author, and teacher. Her work often dealt with the personal celebrations and struggles of ordinary people in her community. She won the Pulitzer Prize for Poetry on May 1, 1950, for Annie Allen, making her the first African American to receive a Pulitzer Prize.

Throughout her prolific writing career, Brooks received many more honors. A lifelong resident of Chicago, she was appointed Poet Laureate of Illinois in 1968, a position she held until her death 32 years later. She was also named the Poet Laureate Consultant in Poetry to the Library of Congress for the 1985–86 term. In 1976, she became the first African-American woman inducted into the American Academy of Arts and Letters. (Wikipedia) 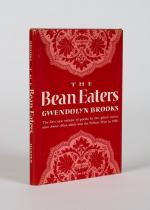 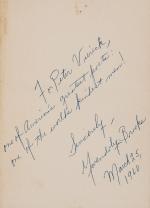 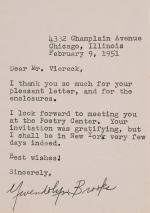 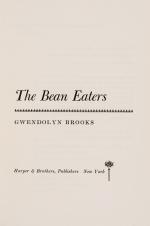