Manuscript letter Signed (MLS) by english architect and designer Charles Robert Ashbee to Sir Harry Luke, condoling him on the death of Luke’s father H.C.Luke. Ashbee reminisces: ‘I recall a charming hour I once spent with your father when on leave from Palestine – during your first year in Palestine [1921] – I brought him some message or other – the message is forgotten….the memory of the pleasant personality abides. Come to us again some day – Yours always, C.R.Ashbee – Godden Green – Near Sevenoaks).’

Charles Robert Ashbee (17 May 1863 – 23 May 1942) was an English architect and designer who was a prime mover of the Arts and Crafts movement that took its craft ethic from the works of John Ruskin and its co-operative structure from the socialism of William Morris.
Ashbee was born in 1863 in Isleworth, the son of businessman and erotic bibliophile Henry Spencer Ashbee. His Jewish mother developed suffragette views, and his well-educated sisters were progressive as well. Ashbee went to Wellington College and read history at King’s College, Cambridge, from 1883 to 1886, and studied under the architect George Frederick Bodley.
Ashbee set up his Guild and School of Handicraft in 1888 in London, while a resident at Toynbee Hall, one of the original settlements set up to alleviate inner city poverty, in this case, in the slums of Whitechapel. The fledgling venture was first housed in temporary space but by 1890 had workshops at Essex House, Mile End Road, in the East End, with a retail outlet in the heart of the West End in fashionable Brook Street, Mayfair, more accessible to the Guild’s patrons. The School closed in 1895, which Ashbee blamed on “the failure of the Technical Education Board of the L.C.C. to keep its word with the School Committee and the impossibility of carrying on costly educational work in the teeth of state aided competition.” The following year the L.C.C. opened the Central School of Arts and Crafts. In 1902 the Guild moved to Chipping Campden, in the picturesque Cotswolds of Gloucestershire, where a sympathetic community provided local patrons, but where the market for craftsman-designed furniture and metalwork was saturated by 1905. The Guild was liquidated in 1907. One of Ashbee’s pupils in Mile End was Frank Baines, later Sir Frank, who was enormously influential in keeping Arts and Crafts alive in 20th-century architecture.

The Guild of Handicraft specialised in metalworking, producing jewellery and enamels as well as hand-wrought copper and wrought ironwork, and furniture. (A widely illustrated suite of furniture was made by the Guild to designs of M. H. Baillie Scott for Ernest Louis, Grand Duke of Hesse at Darmstadt.) The School attached to the Guild taught crafts.The Guild operated as a co-operative, and its stated aim was to:

seek not only to set a higher standard of craftsmanship, but at the same time, and in so doing, to protect the status of the craftsman. To this end it endeavours to steer a mean between the independence of the artist— which is individualistic and often parasitical— and the trade-shop, where the workman is bound to purely commercial and antiquated traditions, and has, as a rule, neither stake in the business nor any interest beyond his weekly wage.

Ashbee himself was willing to do complete house design, including interior furniture and decoration, as well as items such as fireplaces. In the 1890s he renovated The Wodehouse near Wombourne for Colonel Shaw-Hellier, commandant of the Royal Military School of Music, adding a billiard room and chapel, amid many external changes. Shaw-Hellier commissioned him in 1907 to build the Villa San Giorgio in Taormina, Sicily, as a little island of England in Italy, hence the name of the patron saint. His biographer Fiona MacCarthy judges it “the most impressive of Ashbee’s remaining buildings”; it is run as the Hotel Ashbee.

Ashbee was involved in book production and literary work. He set up the Essex House Press after Morris’s Kelmscott Press closed in 1897, taking on many of the displaced printers and craftsmen. Between 1898 and 1910 the Essex House Press produced more than 70 titles. Ashbee designed two type faces for the Press, Endevour (1901) and Prayer Book (1903), both of which are based on Morris’ Golden Type.

Ashbee wrote two utopian novels influenced by Morris, From Whitechapel to Camelot (1892) and The Building of Thelema (1910), the latter named after the abbey in François Rabelais’ book Gargantua and Pantagruel. Ashbee also founded the Survey of London.

Ashbee was homosexual in a time when homosexuality was illegal. He is thought to have been a member of the Order of Chaeronea, a secret society founded in 1897 by George Ives for the cultivation of a homosexual ethos. In 1898 to cover his homosexuality, he married Janet Forbes, daughter of a wealthy London stockbroker and after 13 years of rocky marriage (including a serious affair on the part of Janet), they had four children: Mary, Helen, Prue and Felicity. He was influenced in his life by the theories of homosexuality developed by Edward Carpenter.
In 1918 he was appointed civic adviser to the British Mandate of Palestine, overseeing building works and the protection of historic sites and monuments as the chairman of the Pro-Jerusalem Society. He summoned his family to Jerusalem, where they lived until 1923. He died in 1942 at Sevenoaks and was buried at St Peter and St Paul’s Church in Seal, Kent, where he was church architect. The internal screen for the church tower was designed by Ashbee. His papers and journals are at King’s College. (Wikipedia) 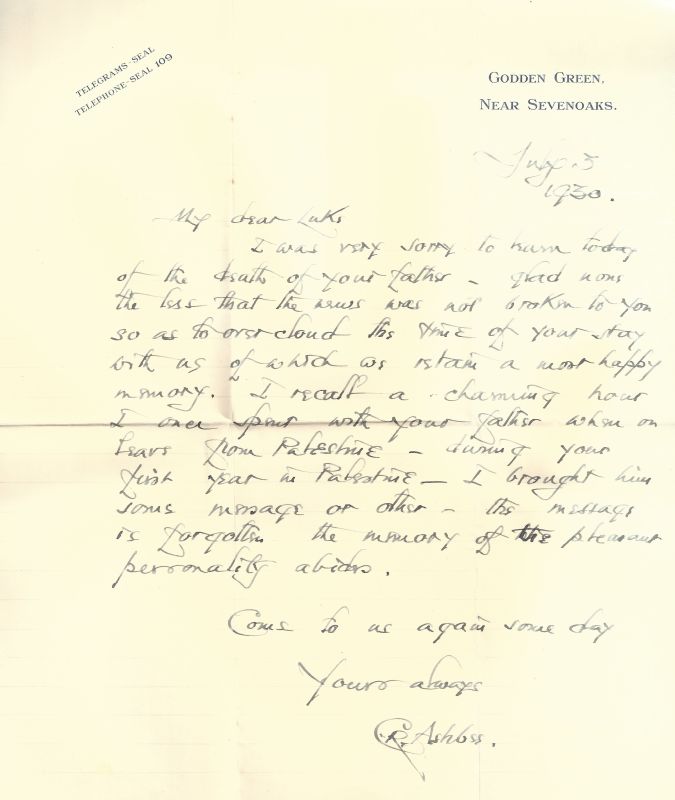