Manuscript Letter signed (MLS) from Naval Secretary Sir Frank Larken to Sir Harry Luke. The letter addressed to Luke’s posting in Freetown, Sierra Leone [Envelope reads: ‘Harry C Luke Esq. CMG – The Colonial Secreatry – Sierra Leone’ – stamped: ‘Naval Secretary to First Lord’]. Sir Frank Larken congratulates Harry Luke on receiving the CMG [‘Companion’– Most Distinguished Order of Saint Michael and Saint George]. Larken writes: ‘My dear Luke – I send my best congratulations to you and Mrs. Luke on the CMG: it gave me great pleasure to see your name in the honours list. I see you are recurring your acquaintance with Sierra Leone. I can imagine that with your interaction + talent there are many more congenial spots you would have chosen – which your wife would prefer. Does the engaging native still talk the language the amusing sample of which you used to amuse us by giving: ‘I am in a bureau – s Secretary – To a Cabinet Minister’ – You will smile. Nasmith [that is Admiral Sir Martin Eric Dunbar-Nasmith VC, KCB, KCMG (1 April 1883 – 29 June 1965)] has just gone to command the College at Dartmouth [Britannia Royal Naval College Commander from 1926 – 1929] – a very good appt. + [?] the man for it. What a nipping time you gave Martin Nasmith + myself in Jerusalem. Kind regards to Mrs. Luke. Yours Frank Larken’.

Whitehall, On Whitehall Admiralty Stationery, 1926. Octavo. 2 pages (1 sheet with writing on both sides) and envelope. From the private collection / library of colonial governor, diplomat and historian, Sir Harry Luke.

Vice-Admiral Sir Frank Larken KCB CMG (1875–1953) was a Royal Navy officer who became Naval Secretary.
Larken served in World War I and, as Captain of the cruiser HMS Doris, he led a successful raid cutting the railway line between Adana and Alexandretta in December 1914 thereby impeding the progress of the Turkish invasion of North Africa. He also saw action at Gallipoli in 1915. After the War he was made Captain of the Fleet, Mediterranean Fleet before being given command of the battleship HMS Valiant. Following his promotion to Rear Admiral, he became Naval Secretary in 1925 and Commander of the 2nd Cruiser Squadron in 1927, and, following his promotion to Vice Admiral, he went on to command the Reserve Fleet in 1930 before retiring in 1932. (Wikipedia)

Admiral Sir Martin Eric Dunbar-Nasmith VC, KCB, KCMG (1 April 1883 – 29 June 1965) was a Royal Navy officer and a recipient of the Victoria Cross, the highest award for gallantry in the face of the enemy that can be awarded to British and Commonwealth forces. He was born Martin Eric Nasmith, adding “Dunbar” to his surname in 1923. (Wikipedia)

Sir Harry Charles Luke KCMG GCStJ (born Harry Charles Lukach) (4 December 1884 – 11 May 1969) was an official in the British Colonial Office. He served in Barbados, Cyprus, Transcaucasia, Sierra Leone, Palestine, Malta, the British Western Pacific Territories and Fiji. He is the author of some books on several of these countries. (Wikipedia) 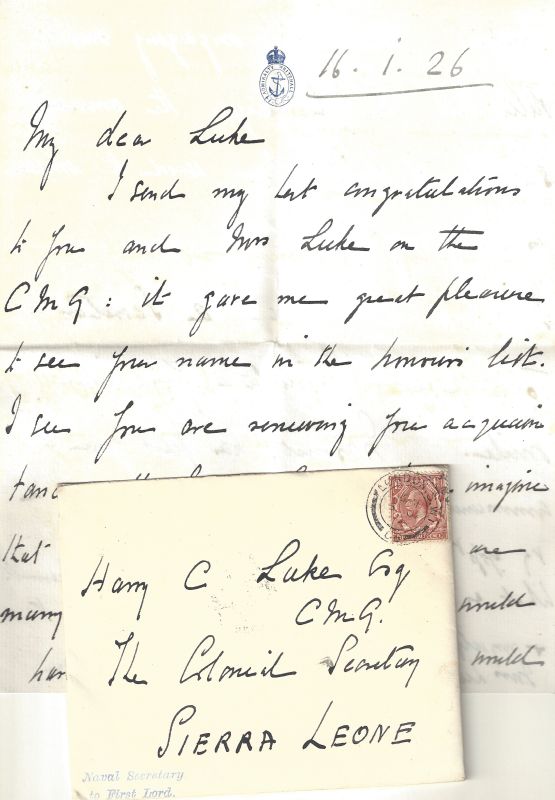