Manuscript letter signed (MLS) from Chief Justice of Tanganyika (1924-1929), Sir William Alison Russell to Sir Harry Luke on the occasion of Luke receiving the CMG. Russel, then stationed in Dar Es Salaam for the Colonial office send him a lengthy letter with very interesting detail: ‘Dear Luke, my wife and I am delighted to see an announcement…of this high honour bestowed on you….In these days an honour of that kind is indeed an honour. Have sent your book on Mosul to Sir D. Cameron [Sir Donald Charles Cameron, GCMG KBE (3 June 1872 – 8 January 1948)] ……I am going down the Congo, I hope + out at Matadi. Leaving Kigoma at the beginning of May – it takes about six weeks from Kigoma to Antwerp….I have never been to Haarlem. I am looking forward to sailing this summer. Only my friends picked up this ‘Winnie’ last summer in a pitch night ….+ she went to pieces. But I dare say I shall get another berth in a boat. I want to go ‘foreign’ – perhaps to Spain again. I wonder if there could be a chance of seeing you next summer in England. How goes it in Sierra Leone [?]…I thought your Mosul book very interesting + so fresh……Yours sincerely A. Russell.’

Sir Harry Charles Luke KCMG GCStJ (born Harry Charles Lukach) (4 December 1884 – 11 May 1969) was an official in the British Colonial Office. He served in Barbados, Cyprus, Transcaucasia, Sierra Leone, Palestine, Malta, the British Western Pacific Territories and Fiji. He is the author of some books on several of these countries. (Wikipedia) 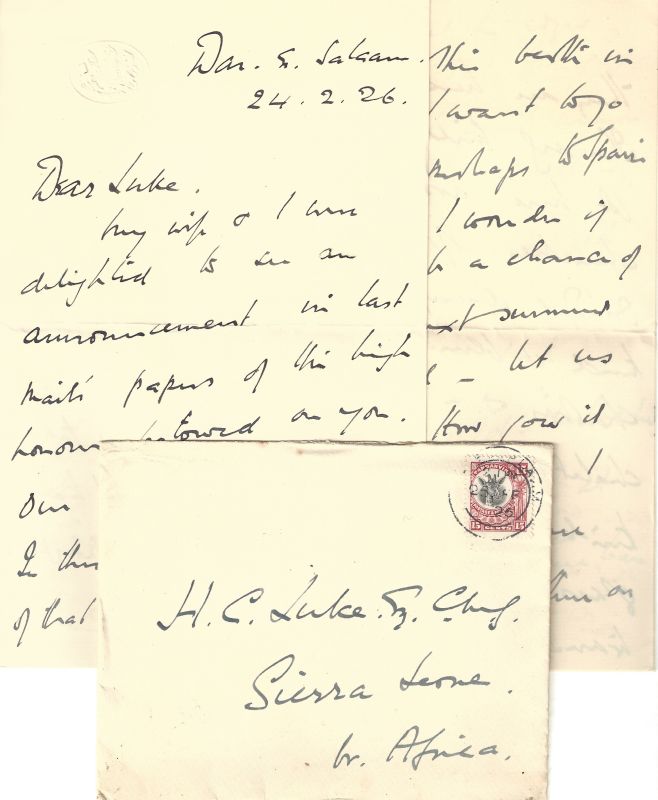