London, Richard Bentley, 1871 – 1877. Octavo. More than 7500 pages. Original half leather with gilt lettering on spine. The bindings with two exceptions in excellent and firm condition. Two Volumes with damages to the spine. Interior very good with only four pages loosened and a few occasional tears; one corner torn out but still available. A rare long run of this extremely rare decade of the magazine with publications of Trollope and Andersen !

The United Service Journal and Naval and Military Magazine. 1833 Part I and Part II. / The Volumes include for example essays on: Ireland and the British Army / Naval Operations on the Potomac / Artillery Practice at the Siege of the Citadel of Antwerp / History of the Goldstream Guards / Cavalry Warfare / The Jamaica Station / Siege of Badajoz in 1812 / Military Organization of Belgium / Record of the Services of the twenty-third Regiment / Plan for the suppression of Piracy / The Indian Army / Observations on the Construction and Qualities of the Vernon and Castor and on Naval Architecture in General by Capt.Charles Napier / Remark on the Defence and Invasion of Ireland / On the Defective Discipline of the Merchant Service with Hints for Amending it / Colonies – Their Influence on Maritime and Military Ascendancy / The Crisis of Turkey / Royal Naval School / On the Overland Invasion of India / Reply to Major Gawler on his “Crisis of Waterloo” by Sir Hussey Vivian / Debate on Sir Thomas Troubridge / Memoir on the Defence of Canada in 1833 (with a Map) / Narrative of Captain Ross’s First Voyage of Discovery / Military Establishments of Germany / The Port of Hastings / The Jamaica Station / Jersey, as a Residence for Officers on the half-pay of the Army and the Navy / Military Equipments: Waterproof Cartridges – Sapata – Self-fixing Bayonets / James Toggle – A Tar of the Old School etc. etc.

The Strand Magazine – 23 Volumes in total. With first printings of “The Adventures of Sherlock Holmes” in Volumes III, IV, V, XII and XIII. [Volumes I, II and VI missing] Of the missing Volumes only Volume II and VI contained Stories of Doyle].

First Edition. 30 Volumes. London, Effingham House / Caxton House, 1897 – 1911. 23.5 cm x 32.5 cm. More than 8000 pages with hundreds of illustrations and original artwork. Original Hardcover (Green Publisher’s cloth with beautiful gilted ornament and lettering on spine). Excellent condition with only minor signs of external wear. All the Volumes firm and only very few Volumes with minor signs of external wear and some darkening to the spines. Important Source for the Arts and Crafts Movement //. 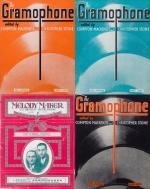 The Gramophone / Collection of c.785 Issues of the influential classical music magazine from October 1935 – December 2002 including several Index – Volumes and special issues. This being one of the largest known, nearly complete runs of this magazine with some Issues missing here and there only. [From the George Hitching Music Collection]

England, 1935 – 2003. Octavo. More than 20000 pages of secret classical music knowledge. Original Softcovers. Very good condition with only minor signs of external wear and some of the early volumes with some fraying only. The price includes an upgrade to worldwide free shipping of the collection per DHL Express Courier.