Bantry House, Co. Cork – The Seat of the Earl of Bantry to whom this Plate is Respectfully Dedicated.

Lives of Seventy of the Most Eminent Painters, Sculptors, and Architects by Giorgio Vasari. [With a manuscript letter signed by american painter and muralist Edwin Howland Blashfield to Miss Emily Keene Barnum in which a Miss Gray is discussed, a model who posed for Blashfields Mural in Washington’s Library of Congress]. Edited and Annotated in t he Light of Recent Discoveries by E.H. and E.W. Blashfield and A.A. Hopkins.

First Edition. Four Volumes (complete set). New York, Charles Scribner’s Sons, 1897. Octavo. Pagination: Volume I: Tipped-in manuscript letter by Blashfield, LXXII, 336 pages / Volume II: VI, 407 pages / Volume III: 416 pages / Volume IV: 443 pages. Hardcover / Original burgundy publisher’s cloth with gilt lettering to spine and ornament to front board. All four volumes in protective collector’s mylar. The endpaper to which the beautiful letter of Blashfield is attached, slightly detached. Spine slightly faded, otherwise in absolutely excellent condition with only minor signs of external wear. Name of preowner Emily Keene Barnum on endpaper of each Volume. The letter with interesting content: “My Dear Miss Barnum, I have never seen Miss Gray since she posed for my Washington Library Things several years ago. She called a year or two later, saw Mrs. Blashfield, Told her she was playing with an English Company and would come to the studio if she had time but I never saw her after her first visit to this country nor can I remember that she left any address. I am very [?] that I cannot help you. Yours Edwin H. Blashfield – 48 W. 59 St. 16 Mch 1901”.

Original First Edition [Autographed / Signed / Inscribed Dedication copy]. Cork / London / Paris, 1838-1910. Octavo /Quarto. Pagination of the very rare Spolasco-Item: Portrait – Frontispiece of Spolasco, 72 pages including the lithograph of Renny Bay and several pages of statements advertising the cures and abilities of Baron Spolasco in which he was healing local irish people [excerpts from statements of cured people in local newspapers like the Limerick Star, Limerick Chronicle etc. are mentioned]. Two of the four publications are in their original bindings, two of them in contemporary, private bindings. Important: The very rare Spolasco-item also includes the printed dedication to Lady Roberts by Baron Spolasco which is additionally signed by Baron Spolasco in Crayon. Very good condition with some professional repairs to paper-corners. Small, minor damage to lower spine/frontcover. Bookplate of W.R.Westropp Roberts to pastedown. With a handwritten statement by WR Westropp Roberts to the front free endpaper: “″This copy of the Narrative of the wreck of the Steamer Killarney was presented by Baron Spolasco to Lady Roberts. In her efforts to aid the sufferers upon the rock she contracted a chill which proved fatal in the month of October of the year in which the wreck took place. The Parish Register of Tracton, Co. Cork contains, under the heading ‘Burials’, the following Entry: “b. Oct. 1838 Lady Elizabeth Caroline Roberts placed in this family vault at Ballyfoyle”. The book subsequently found its way into the hands of Messrs. Massey, Booksellers, Patrick Street, Cork, from whom I obtained it in the autumn of 1916. The Library Clerk had it bound for me in January 1917. WRWestropp Roberts’. Of utmost rarity ! 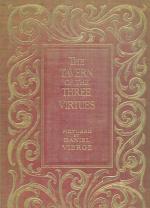 The Tavern of the Three Virtues. Translated from the Original of Saint-Juirs. Illustrated with sixty drawings by Daniel Verge together with a critical essay on the art of Vierge by Edmund Gosse. First Edition Third Printing. New York, Boston, London, Little, Brown and Company, 2008. 26 cm x 34 cm. 266 pages. Beautifully illustrated, with over 200 plates. Cartographically illustrated titlepage and content page. Hardcover. Boards are stunningly illustrated with reprint of the 1507 Waldseemüller map that was the first map to use the name “America”. Pastedowns and endpapers illustrated with ‘Pictorial Map on Cloth of the Vale of Kashmir Showing Srinagar in Detail.’ With dustjacket in protective mylar. Dustjacket richly illustrated with 17th century Portuguese map of Southeast Africa. Near fine condition internally and externally. 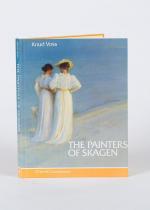 The Painters of Skagen. English Translation and Bibliography by Peter Shield.

Examples of Classic Ornament from Greece & Rome. Drawn from the Originals by Lewis Vulliamy [Architect, Gold Medallist and Travelling Student of the Royal Academy]. A Series of Twenty Plates [Plate No. VI missing]. Selected from the Original Published Work and with Introductory & Descriptive Notes by R. Phene Spiers. Flora’s Feast: A Masque of Flowers.