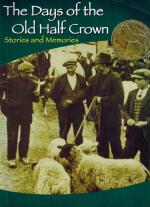 The Days of the Old Half Crown [Dunmanway]

Original First Edition [Autographed / Signed / Inscribed Dedication copy]. Cork / London / Paris, 1838-1910. Octavo /Quarto. Pagination of the very rare Spolasco-Item: Portrait – Frontispiece of Spolasco, 72 pages including the lithograph of Renny Bay and several pages of statements advertising the cures and abilities of Baron Spolasco in which he was healing local irish people [excerpts from statements of cured people in local newspapers like the Limerick Star, Limerick Chronicle etc. are mentioned]. Two of the four publications are in their original bindings, two of them in contemporary, private bindings. Important: The very rare Spolasco-item also includes the printed dedication to Lady Roberts by Baron Spolasco which is additionally signed by Baron Spolasco in Crayon. Very good condition with some professional repairs to paper-corners. Small, minor damage to lower spine/frontcover. Bookplate of W.R.Westropp Roberts to pastedown. With a handwritten statement by WR Westropp Roberts to the front free endpaper: “″This copy of the Narrative of the wreck of the Steamer Killarney was presented by Baron Spolasco to Lady Roberts. In her efforts to aid the sufferers upon the rock she contracted a chill which proved fatal in the month of October of the year in which the wreck took place. The Parish Register of Tracton, Co. Cork contains, under the heading ‘Burials’, the following Entry: “b. Oct. 1838 Lady Elizabeth Caroline Roberts placed in this family vault at Ballyfoyle”. The book subsequently found its way into the hands of Messrs. Massey, Booksellers, Patrick Street, Cork, from whom I obtained it in the autumn of 1916. The Library Clerk had it bound for me in January 1917. WRWestropp Roberts’. Of utmost rarity !

The Berehaven Copper Mines: Allihies, Co. Cork, S.W. Ireland. British Mining No. 42. History of the commercial, social life and folklore of this region.

The ‘Post Chaise Companion’: Or ‘Travellers Directory through Ireland’. Containing a New & Accurate Description of the Direct and Principal Cross Roads, with particulars of the Noblemen & Gentlemen’s Seats, Cities, Towns, Parks, Natural Curiosities, Antiquities, Castles, Ruins, Manufactures, Loughs, Glens, Harbours, &c. &c. Forming an Historical & Descriptive Account of the Kingdom. To Which is Added, ‘A Travelling Dictionary’, or Alphabetical Tables, Shewing the Distances of all the Principal Cities, Boroughs, Market & Sea Port Towns in Ireland from Each Other.

The 4th Edition, corrected and enlarged. With an entire New Set of Plates. Dublin, Printed & Published by J.Fleming, no year [c.1813-1815]. Octavo (14 cm x 22 cm). Frontispiece, XXXVI, 660 (double-columns, not pages: Nearly all pages are divided in double-columns and only from the ‘Circuits of the Judges’ does the book switch to single page-pagination, ending with [false] page 660 plus 19 unnumbered pages of Index). With the large fold-out: “Map of the Roads of Ireland including all the Post-Towns” (36 cm x 48 cm) and all the plates in place (see full list below and high – resolution – images on our website). Hardcover / Original, early 19th – century half leather with new spinelabel. The rare,best and enlarged, 4th edition in a contemporary 19th-century binding. Upper hinge slightly damaged. Interior very good with some minor foxing. Overall a rare and excellent publication.