The original painting, after which this engraving was produced by Fokke, used to hang in the town hall of Dordrecht but was destroyed in 1672.

The Raid on the Medway, during the Second Anglo-Dutch War in June 1667, was a successful attack conducted by the Dutch navy on English warships laid up in the fleet anchorages off Chatham Dockyard and Gillingham in the county of Kent. At the time, the fortress of Upnor Castle and a barrier chain called the “Gillingham Line” were supposed to protect the English ships.
The Dutch, under nominal command of Willem Joseph van Ghent and Lieutenant-Admiral Michiel de Ruyter, over several days bombarded and captured the town of Sheerness, sailed up the Thames estuary to Gravesend, then sailed into the River Medway to Chatham and Gillingham, where they engaged fortifications with cannon fire, burned or captured three capital ships and ten more ships of the line, and captured and towed away the flagship of the English fleet, HMS Royal Charles.
Politically, the raid was disastrous for King Charles’ war plans and led to a quick end to the war and a favourable peace for the Dutch. It was one of the worst defeats in the Royal Navy’s history, and one of the worst suffered by the British military. Horace George Franks called it the “most serious defeat it has ever had in its home waters.″

In 1667 Charles II’s active fleet was in a reduced state due to recent expenditure restrictions, with the remaining “big ships” laid up. The Dutch seized this opportunity to attack the English. They had made earlier plans for such an attack in 1666 after the Four Days Battle but were prevented from carrying them out by their defeat in the St James’s Day Battle. The mastermind behind the plan was the leading Dutch politician Grand Pensionary Johan de Witt.

His brother Cornelis de Witt accompanied the fleet to supervise. Peace negotiations had been in progress at Breda since March, but Charles had been procrastinating over the signing of peace, hoping to improve his position through secret French assistance. ased on these assumptions De Witt thought it best to end the war quickly with a clear victory, thereby ensuring a more advantageous settlement for the Dutch Republic. Most Dutch flag officers had strong doubts about the feasibility of such a daring attack, fearing the treacherous shoals in the Thames estuary, but they obeyed orders nevertheless. The Dutch made use of two English pilots who had defected, one a dissenter named Robert Holland, the other a smuggler who had fled English justice.

The diary of Samuel Pepys, as secretary of the Navy Board, is often cited in descriptions of the raid, as it gives direct information about the attitude of the policy makers in this period and of the psychological impact of the attack.

As he expected a stiffening English resistance, Cornelis de Witt on 14 June decided to forego a further penetration and withdraw, towing Royal Charles along as a war trophy; Unity also was removed with a prize crew. This decision saved the scuttled capital ships Royal Katherine, Unicorn, Victory and St George. However, Dutch sailors rowed to any English ship they could reach to set her on fire, thus ensuring their reward money. One boat even re-entered the docks to make sure nothing was left above the waterline of the English vessels Royal Oak, Royal James and Loyal London; another burned the merchantman Slot van Honingen, though it had been intended to salvage this precious ship. By chance, the shore facilities of Chatham Dockyard escaped destruction as no Dutch vessels reached her docks; the survival of these docks ensured the Royal Navy could repair her sunken ships. English villages were plundered – by their own troops.

The Dutch fleet, after celebrating by collectively thanking God for “a great victory in a just war in self-defence” tried to repeat its success by attacking several other ports on the English east coast but was repelled each time. On 27 June an attempt to enter the Thames beyond Gravesend was called off when it became known that the river was blocked by blockships and five fireships awaited the Dutch attack. On 2 July a Dutch marine force landed near Woodbridge north of Harwich and successfully prevented Landguard Fort from being reinforced but a direct assault on the fort by 1500 marines was beaten off by the garrison. On 3 July an attack on Osley Bay failed. On 21 July Julian calendar peace was signed.

But still, Samuel Pepys notes in his diary on 19 July 1667: “The Dutch fleete are in great squadrons everywhere still about Harwich, and were lately at Portsmouth; and the last letters say at Plymouth, and now gone to Dartmouth to destroy our Streights’ fleete lately got in thither; but God knows whether they can do it any hurt, or no, but it was pretty news come the other day so fast, of the Dutch fleets being in so many places, that Sir W. Batten at table cried, By God, says he, I think the Devil shits Dutchmen.″

And on 29 July 1667: “Thus in all things, in wisdom, courage, force, knowledge of our own streams, and success, the Dutch have the best of us, and do end the war with victory on their side”. (Wikipedia) 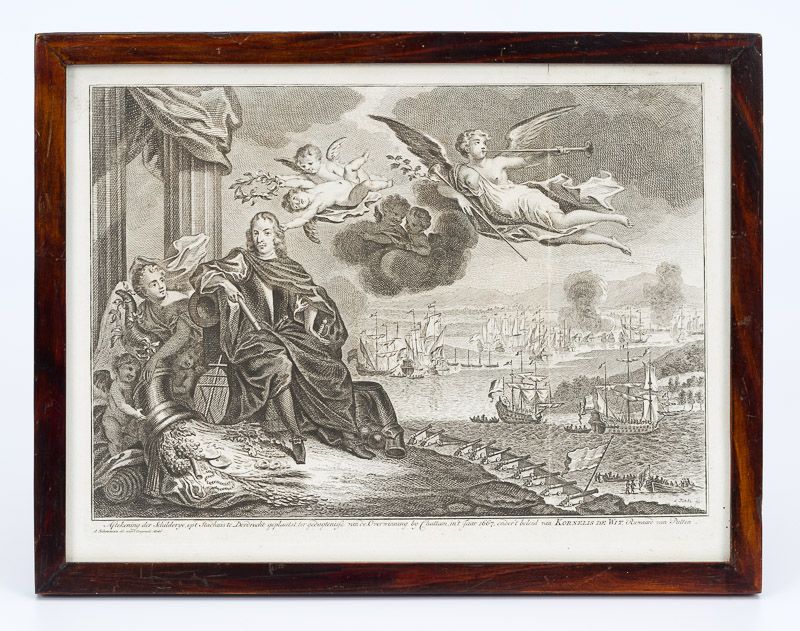