Minihan, Original photograph of Seamus Heaney at his 70th birthday in his home i

Original photograph of Seamus Heaney at his 70th birthday in his home in Dublin, in the year 2009 / Titled and Signed by John Minihan in 2014 / The vintage photograph is here framed together with the original commemoration Stamp and signed First Day Cover of Anpost [The photograph was used as a Template for the creation of the Anpost Stamp in 2014].

Vintage Photograph on archival paper / Vintage First Day Cover with extra signature by John Minihan. Dublin, 2014. Image of the Photograph: 16 cm x 24 cm / First Day Cover: 18 cm x 12 cm. Overall Framed Size: 79 cm wide x 53,5 cm high. From the personal library of irish photographer John Minihan. Titled and signed by John Minihan. Beautifully framed (see multiple images on our website). Our company knows of an edition of four photographs and signed First Day Covers, which we bought from John Minihan in 2014 and which he signed in 2014. Later, signed First Day Covers are circulating and we have some of those in our archive for sale. But since John Minihan has sold the rights to most of his iconic images to UCC in Cork, none of the photographs are reprinted by the photographer and that makes this combination of the signed Seamus Heaney photograph, combined with the First Day Cover, signed actually on August 28th of 2014, very scarce. We have an edition of 3 (three) left. One is part of the “John Minihan Photography Collection”, which we are selling on our website (see under “Libraries & Collections”) and two are for sale on the free international market. The here offered, beautifully framed version, is one of these two. The price includes free international shipping per UPS Courier !

Seamus Justin Heaney MRIA (13 April 1939 – 30 August 2013) was an Irish poet, playwright and translator. He received the 1995 Nobel Prize in Literature. Among his best-known works is Death of a Naturalist (1966), his first major published volume. Heaney was and is still recognised as one of the principal contributors to poetry in Ireland during his lifetime. American poet Robert Lowell described him as “the most important Irish poet since Yeats”, and many others, including the academic John Sutherland, have said that he was “the greatest poet of our age”. Robert Pinsky has stated that “with his wonderful gift of eye and ear Heaney has the gift of the story-teller.” Upon his death in 2013, The Independent described him as “probably the best-known poet in the world”.

Heaney was born in the townland of Tamniaran between Castledawson and Toomebridge, Northern Ireland. His family moved to nearby Bellaghy when he was a boy. He became a lecturer at St. Joseph’s College in Belfast in the early 1960s, after attending Queen’s University and began to publish poetry. He lived in Sandymount, Dublin, from 1976 until his death. He lived part-time in the United States from 1981 to 2006.

Heaney is buried at the Cemetery of St Mary’s Church, Bellaghy, Northern Ireland. The headstone bears the epitaph “Walk on air against your better judgement”, from one of his poems, “The Gravel Walks”.

Upon Heany’s death, Poet Michael Longley, a close friend of Heaney, said: “I feel like I’ve lost a brother.” Thomas Kinsella said he was shocked, but John Montague said he had known for some time that the poet was not well. Playwright Frank McGuinness called Heaney “the greatest Irishman of my generation: he had no rivals.” Colm Tóibín wrote: “In a time of burnings and bombings Heaney used poetry to offer an alternative world.” Gerald Dawe said he was “like an older brother who encouraged you to do the best you could do”. Theo Dorgan said, “[Heaney’s] work will pass into permanence. Everywhere I go there is real shock at this. Seamus was one of us.” His publisher, Faber and Faber, noted that “his impact on literary culture is immeasurable.” Playwright Tom Stoppard said, “Seamus never had a sour moment, neither in person nor on paper”. Andrew Motion, a former UK Poet Laureate and friend of Heaney, called him “a great poet, a wonderful writer about poetry, and a person of truly exceptional grace and intelligence.″

Many memorial events were held, including a commemoration at Emory University, Harvard University, Oxford University and the Southbank Centre, London. Leading US poetry organisations also met in New York to commemorate the death. (Wikipedia) 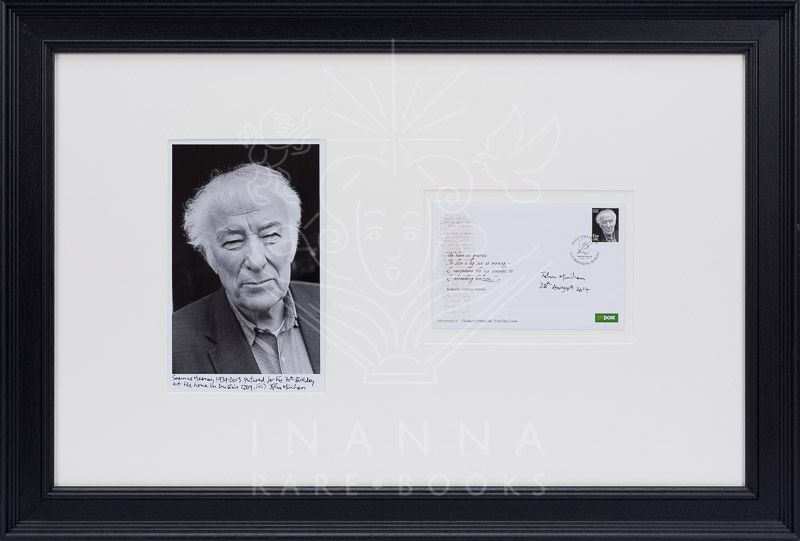 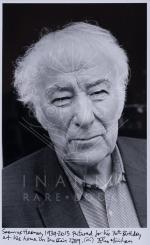