Tallis, The World on Mercator's Projection - With Vignettes of London, Gibraltar

The World on Mercator’s Projection – With Vignettes of London, Gibraltar, Constantinople, The Pyramids of Ghizeh, Niagara, Pont Neuf Paris and Vesuvius.

Published in the Illustrated Atlas, And Modern History Of The World Geographical, Political, Commercial & Statistical, Edited By R. Montgomery Martin.
Beautifully bordered and fascinating map of the globe utilizing the Mercator projection that became the usual projection for commercial and educational maps in the 19th Century. Even a cursory glance at the map shows the distortions associated with the map as the lands nearer the equator, such as Africa and South American, look disproportionately small when compared to the inflated sized of Greenland and northern Asia. The lack of knowledge about Antarctica is evident with only a sliver of South Victoria included on the map. Britain’s colonial holdings and the steam routes between the UK and its colonies are also included on the map. The major cities and rivers are included on the map and relief depicted with hachuring.
The Mercator projection is a cylindrical map projection presented by the Flemish geographer and cartographer Gerardus Mercator in 1569. It became the standard map projection for navigation because of its unique property of representing any course of constant bearing as a straight segment. 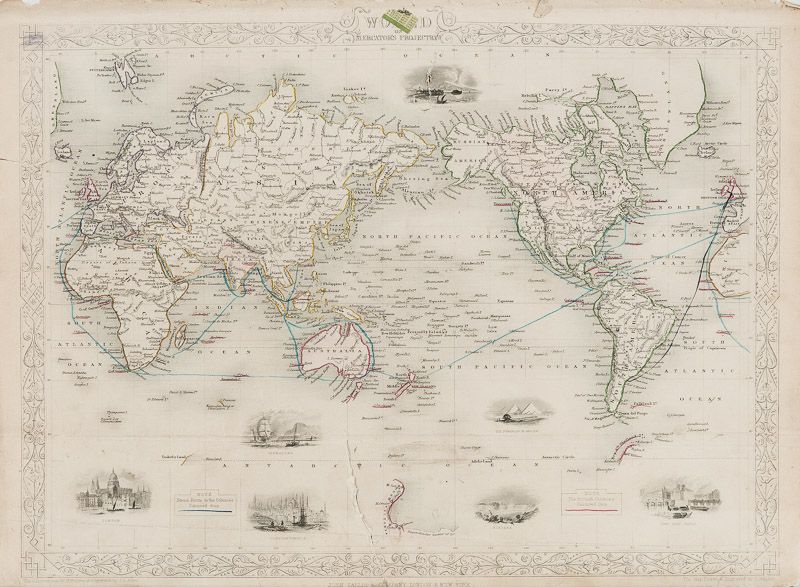