Tallis, Boston - With Beautiful Vignettes of Boston, the State House and Bunke

Boston – With Beautiful Vignettes of Boston, the State House and Bunker Hill’s Monument.

Handsome town-plan of Boston, Massachusetts. The Charles River can be seen running between Boston and Charlestown. South Boston and East Boston are also included within Boston Harbour. Parts of Cambridge are also visible. The map covers downtown Boston prior to the Back Bay landfill projects, extending from Dover Street to the Charles River. Railway, street and district areas of the city are also included. Decorative scrolling and title cartouche around the edges of the map.
The project of ‘The Illustrated Atlas’ was designed to be finished just in time for the anxiously awaited “Great Exhibition of the Works of Industry of All Nations” or The Great Exhibition, sometimes referred to as the Crystal Palace Exhibition in reference to the temporary structure in which it was held, was an international exhibition that took place in Hyde Park, London, from 1 May to 11 October 1851. It was the first in a series of World’s Fairs, exhibitions of culture and industry that became popular in the 19th century, and it was a much-anticipated event. 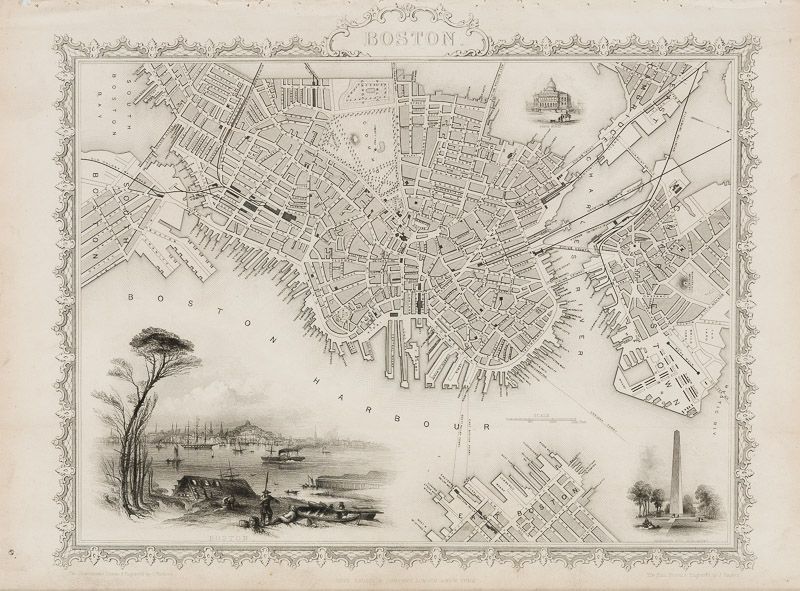