Books for a Humanist Society

The Other Side – L’Altra Faccia. [Signed / Inscribed].

Cervantes De Saavedra, Miguel [Jarvis Edition with an excellent provenance, being from the library of John Fane, (Lord Burgersh) the Earl of Westmoreland].

The Life and Exploits of the Ingenious Gentleman Don Quixote de la Mancha. Translated from the Original Spanish by Charles Jarvis, Esq. [Bound with: “The Life of Michael de Cervantes Saavedra” and an “Advertisement concerning the Plates”].

Second issue of the First Jarvis Edition. Two Volumes (complete set). London, J. & R. Tonson and R. Dodsley, 1738-1742. Quarto. Pagination: Volume I: Frontispiece, XXIV, (8), I – [XXIV], (interrupted with 8 unnumbered pages: “Supplement to the Translator’s Preface,” on the origin of books of chivalry, [by Wiliam Warburton]), continued pagination [XXV-XXXII], Second Frontispiece (Portrait of Cervantes by George Vertue after G. Kent), V, (2), 355 pages with 28 copperplates (including the two frontispieces). Volume II: XII, 388 pages with 41 copperplate illustrations. In total 69 copperplate engravings, all drawn by John Vanderbank and engraved by Gerard van der Gucht / Vandergucht. Modern Hardcover bindings by an english masterbinder, styled to the 18th century period and with new endpapers that carry the original bookplates / Exlibris of John Fane, (Lord Burgersh) the Earl of Westmoreland. Excellent condition with only minor signs of foxing to the outer margins of the pages. All illustrations in strong and fresh imprint. An excellent set from a famous library.

Letters written by the late Right Honourable Philip Dormer Stanhope, Earl of Chesterfield, to his son, Philip Stanhope, Esq.; Late Envoy Extraordinary at the Court of Dresden: together with other several pieces on various subjects. Published by Mrs. Eugenia Stanhope, from the originals now in her Possession

The Third Edition. In Four Volumes (complete set). London, J. Dodsley in Pall-Mall, 1774. Octavo. Collation: Volume I: Engraved frontispiece of Stanhope, XVI, 352 pages / Volume II: (2), 355 pages / Volume III: (2), 376 pages / Volume IV: (2), 364 pages. (Collation complete). Hardcover / Original 18th century full calf with gilt lettering on original spinelabels. Very good condition with only minor signs of external wear. Smaller dampstain to lower first and last two pages of two volumes only. The bindings a little shaky but holding. Provenance: From the library of Robert Doyne, with his Exlibris – bookplate to the front pastedown of all four volumes. While he died already in 1733 and these books were published in 1774, it is very likely that the bookplates were still applied by his librarian or family / Sir Robert Doyne (1651-1733) was member of the Irish House of Commons for New Ross from 1692 to 1695, and later a distinguished judge who served as Chief Baron of the Irish Exchequer from 1695 to 1703 and Chief Justice of the Irish Common Pleas from 1703 to 1714. In the latter year like all the senior judges in Ireland appointed under Queen Anne he was removed by the new administration; while allegations of corruption were made, the removal seems to have been a simple matter of politics. Although the Irish House of Commons passed a resolution that he had acted corruptly no further action seems to have been taken against him and he lived in peaceful retirement for many years. (Wikipedia) 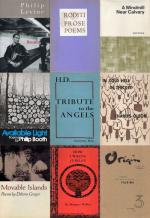 Germany, c.1998. Folio. c. 580 pages. (Xeroxed coverpages with bibliographical accounts attached). Hardcover (half cloth). Very good condition with only minor signs of external wear. Minor dampstain to lower spine. This xerox compilation was done in preparation of selling a private collection in the 1990’s by a german antiquarian bookdealer. Very Rare, probably unique account / bibliography (we are not aware of more copies of this record).