Fry was born as Arthur Hammond Harris in Bristol, the son of Charles John Harris, a master builder who retired early to work full-time as a licensed Lay Reader in the Church of England, and his wife Emma Marguerite Fry Hammond Harris. While still young, he took his mother’s maiden name because, on very tenuous grounds, he believed her to be related to the 19th-century Quaker prison reformer Elizabeth Fry. He adopted Elizabeth Fry’s faith, and became a Quaker.

After attending Bedford Modern School, where he wrote amateur plays, he became a schoolteacher, working at the Bedford Froebel Kindergarten and Hazelwood School in Limpsfield, Surrey. Fry gave up his school career in 1932 to found the Tunbridge Wells Repertory Players, which he ran for three years, directing and starring in the English premiere of George Bernard Shaw’s A Village Wooing in 1934. As a curtain raiser, he put on a revised version of a show he wrote when he was a schoolboy called The Peregrines. He also wrote the music for She Shall Have Music in 1935.

His play about Dr. Thomas John Barnardo, the founder of children’s homes, toured in a fund-raising amateur production in 1935 and 1936, including Deborah Kerr in its cast. His professional career began to take off when he was commissioned by the vicar of Steyning, West Sussex, to write a play celebrating the local saint, Cuthman of Steyning, which became The Boy With A Cart in 1938. It would be put on professionally in 1950 with young Richard Burton and it would be his first starring role.

Tewkesbury Abbey commissioned his next play, The Tower, written in 1939, which was seen by the poet T. S. Eliot, who became a friend and is often cited as an influence. In 1939 Fry also became artistic director of Oxford Playhouse.

A pacifist, he was a conscientious objector during World War II, and served in the Non-Combatant Corps; for part of the time he cleaned London’s sewers. After the Second World War he wrote a comedy, A Phoenix Too Frequent, which was produced at the Mercury Theatre, Notting Hill Gate, London, in 1946, starring Paul Scofield. The show is a comedy that is based upon Petronius’s tale of the Ephesian widow, the false heroics of Dynamene’s mourning of her husband in his tomb, and her reawakening to the joy of life by a handsome officer who enters the tomb to rest on a course of duty.

The Firstborn was produced at the Oxford Playhouse in 1948. The plot is that of Egypt in the throes of a threatening conflict between master and slave, with Moses denouncing his privileges as an Egyptian-reared soldier and finding new responsibility as a leader of his people. The play was produced by actress Katharine Cornell and featured two songs specially written for the play by Leonard Bernstein. In 1948 he wrote a commission for the Canterbury Festival, Thor, With Angels.

In the 1920s he met the writer Robert Gittings, who became a lifelong friend. (Wikipedia) 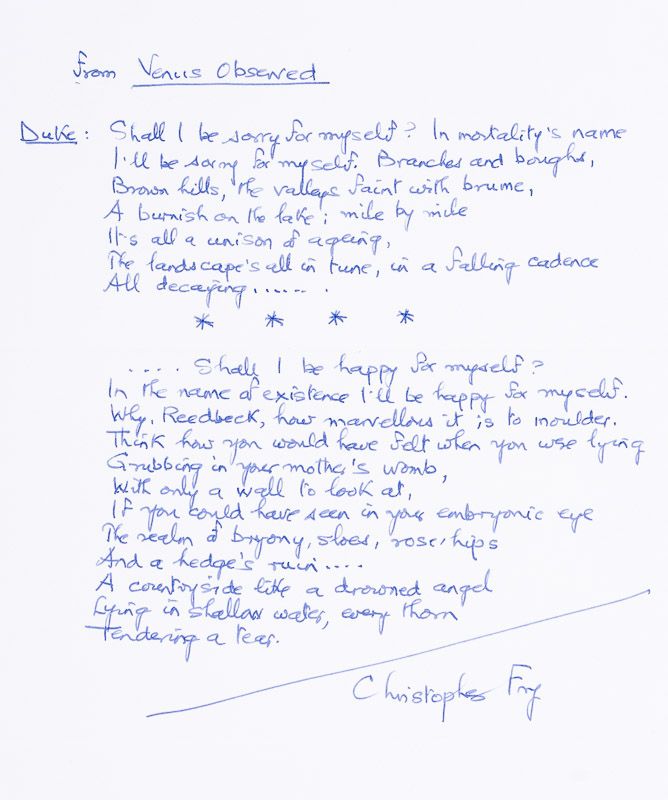