Catalogue No.1 - History of Law 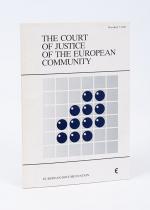 The Court of Justice of the European Community.

New York, London, Chicago, Harcourt, Brace & Company / Viking / Leo Baeck Institute / University of Chicago Press, 1951-1970. Octavo. Collation: IX, 477, XIV, 222, VI, 332, 246, 275, 312, 106 pages. All editions are in original Hardcover and with the exception of the first edition of “The Origins of Toitalitarianism” are in their original dustjackets in protective Mylar. All Volumes in excellent, very good+ or even near fine condition with only minor signs of external wear. Minor stain to lower edge and binding of the first edition of “Eichmann in Jerusalem”. The collection also includes an important special issue on Hannah Arendt, the critical publication “Text + Kritik Volume 166/167” with Anecdotes of contemporaries, Letters / Postcards to Walter Benjamin etc.

The Law of Libel as affecting Newspapers and Journalists.

The Trial of Peter Barnes and others (The I.R.A. Coventry Explosion of 1939). A Selection of Legal Maxims, classified and Illustrated. The Ninth Edition by W.J.Byrne. The Justice of the Peace and Parish Officer. The Fifteenth [and last] Edition: To which is added an Appendix, including the Statutes of the last Session of Parliament (24 G. 3.).

Four Volumes (complete set). London, W.Strahan and W.Woodfall, Law-Printers to the King’s most excellent Majesty, for T.Cadell in the Strand, 1785. Octavo. Volume I: XXVIII, 540 pages / Volume II: 624 pages / Volume III: 640 pages / Volume IV: 451 pages plus 70 unnumbered pages of an Appendix, 68 unnumbered pages of an Index, 25 pages of “A Table of the Statutes contained in this Work”, 1 Errata-Leaf, 2 pages of advertising for “Books printed for and Sold by T.Cadell, in the Strand, London, 1785. Hardcover, original full 18th century calf with gilt lettering on spine and contemporary spine-labels. Spines slightly rubbed. Endpapers with small corner missing (previous owner’s name). Minor wormhole-damage to the first 25 pages of Volume I. From the library of Daniel Conner (Connerville / Manch House), with his Exlibris / Bookplate and Provenance-stamp to pastedown. Overall in very good condition with only minor signs of external wear. Rare in this beautiful, original 18th-century binding.