William Harvey (1 April 1578 – 3 June 1657) was an English physician who made seminal contributions in anatomy and physiology. He was the first known physician to describe completely and in detail the systemic circulation and properties of blood being pumped to the brain and body by the heart, though earlier writers, such as Realdo Colombo, Michael Servetus, and Jacques Dubois, had provided precursors of the theory. In 1973 the William Harvey Hospital was constructed in the town of Ashford, a few miles from his birthplace of Folkestone.
William’s father, Thomas Harvey, was a jurat of Folkestone where he served the office of mayor in 1600. Records and personal descriptions delineate him as an overall calm, diligent, and intelligent man whose “sons… revered, consulted and implicitly trusted in him… (they) made their father the treasurer of their wealth when they acquired great estates…(He) kept, employed, and improved their gainings to their great advantage.” Thomas Harvey’s portrait can still be seen in the central panel of a wall of the dining-room at Rolls Park, Chigwell, in Essex. William was the eldest of nine children, seven sons and two daughters, of Thomas and his wife Joan Halke. Notable family connections include Heneage Finch, 1st Earl of Nottingham, who married William’s niece Elizabeth Harvey, and the diplomat Sir Daniel Harvey.
Harvey’s initial education was carried out in Folkestone, where he learned Latin. He then entered the King’s School (Canterbury). Harvey stayed at the King’s School for five years, after which he matriculated at Gonville and Caius College in Cambridge in 1593.
Harvey graduated as a Bachelor of Arts from Caius in 1597. He then travelled through France and Germany to Italy, where he entered the University of Padua, in 1599.
During Harvey’s years of study there, he developed a relationship with Fabricius and read Fabricius’s De Venarum Ostiolis.
Harvey graduated as a Doctor of Medicine at the age of 24 from the University of Padua on 25 April 1602. It reports that Harvey had

“conducted himself so wonderfully well in the examination and had shown such skill, memory and learning that he had far surpassed even the great hopes which his examiners had formed of him.″

After graduating from Padua, Harvey immediately returned to England where he obtained the degree of Doctor of Medicine from the University of Cambridge that same year, and became a fellow of Gonville and Caius College. Following this, Harvey established himself in London, joining the Royal College of Physicians on 5 October 1604. A few weeks after his admission, Harvey married Elizabeth Browne, “daughter of Lancelot Browne Dr. Physic”. They had no children.

Harvey was elected a Fellow of the Royal College of Physicians on 5 June 1607, which earned him the Post-nominal letters FRCP, and he then accepted a position at St Bartholomew’s Hospital that he was to occupy for almost all the rest of his life. Succeeding a Dr Wilkinson on 14 October 1609, he became the Physician in charge at St Bartholomew’s Hospital, which enjoined him, “in God’s most holy name” to “endeavor yourself to do the best of your knowledge in the profession of physic to the poor then present, or any other of the poor at any time of the week which shall be sent home unto you by the Hospitaller… You shall not, for favor, lucre or gain, appoint or write anything for the poor but such good and wholesome things as you shall think with your best advice will do the poor good, without any affection or respect to be had to the apothecary. And you shall take no gift or reward… for your counsel… This you will promise to do as you shall answer before God… “

Harvey earned around thirty-three pounds a year and lived in a small house in Ludgate, although two houses in West Smithfield were attached as fringe benefits to the post of Physician. At this point, the physician’s function consisted of a simple but thorough analysis of patients who were brought to the hospital once a week and the consequent writing of prescriptions.

Published in 1628 in the city of Frankfurt (host to an annual book fair that Harvey knew would allow immediate dispersion of his work), the 72 page Exercitatio Anatomica de Motu Cordis et Sanguinis in Animalibus contains the matured account of the circulation of the blood. Opening with a dedication to King Charles I, the quarto has 17 chapters which give a clear and connected account of the action of the heart and the consequent movement of the blood around the body in a circuit. Having only a tiny lens at his disposal, Harvey was not able to reach the adequate pictures that were attained through such microscopes used by Antonie van Leeuwenhoek; thus he had to resort to theory – and not practical evidence – in certain parts of his book. After the first chapter, which simply outlines past ideas and accepted rules regarding the heart and lungs, Harvey moves on to a fundamental premise to his treatise, stating that it was important to study the heart when it was active in order to truly comprehend its true movement; a task which even he found of great difficulty, as he says:

“…I found the task so truly arduous… that I was almost tempted to think… that the movement of the heart was only to be comprehended by God. For I could neither rightly perceive at first when the systole and when the diastole took place by reason of the rapidity of the movement…″

This initial thought led Harvey’s ambition and assiduousness to a detailed analysis of the overall structure of the heart (studied with less hindrances in cold-blooded animals). After this, Harvey goes on to an analysis of the arteries, showing how their pulsation depends upon the contraction of the left ventricle, while the contraction of the right ventricle propels its charge of blood into the pulmonary artery. Whilst doing this, the physician reiterates the fact that these two ventricles move together almost simultaneously and not independently as had been thought previously by his predecessors. This discovery was made while observing the heart of such animals as the eel and several other types of fish; indeed, the general study of countless animals was of utmost importance to the physician: among the ones already cited, one can add the study of the snail, the invisible shrimp, the chick before its hatching and even the pigeon. A digression to an experiment can be made to this note: using the inactive heart of a dead pigeon and placing upon it a finger wet with saliva, Harvey was able to witness a transitory and yet incontrovertible pulsation. He had just witnessed the heart’s ability to recover from fatigue.

As early as the 17th century, William Harvey had already discerned the existence of the Ductus Arteriosus and explained its relative function. Here he says, “…in embryos, whilst the lungs are in a state of inaction, performing no function, subject to no movement any more than if they had not been present, Nature uses the two ventricles of the heart as if they formed but one for the transmission of the blood.” However, the apex of Harvey’s work is probably the eighth chapter, in which he deals with the actual quantity of blood passing through the heart from the veins to the arteries. Coming into conflict with Galen’s accepted view of the liver as the origin of venous blood, Harvey estimated the capacity of the heart, how much blood is expelled through each pump of the heart, and the number of times the heart beats in a half an hour. All of these estimates were purposefully low, so that people could see the vast amount of blood Galen’s theory required the liver to produce. He estimated that the capacity of the heart was 1.5 imperial fluid ounces (43 ml), and that every time the heart pumps, ?1/8 of that blood is expelled. This led to Harvey’s estimate that about 1/6 imperial fluid ounce (4.7 ml) of blood went through the heart every time it pumped. The next estimate he used was that the heart beats 1,000 times every half an hour, which gave 10 pounds 6 ounces of blood in a half an hour, and when this number was multiplied by 48 half hours in a day he realized that the liver would have to produce 498 pounds of blood in a day, more than the weight of the whole body.

Having this simple but essential mathematical proportion at hand – which proved the overall impossible aforementioned role of the liver – Harvey went on to prove how the blood circulated in a circle by means of countless experiments initially done on serpents and fish: tying their veins and arteries in separate periods of time, Harvey noticed the modifications which occurred; indeed, as he tied the veins, the heart would become empty, while as he did the same to the arteries, the organ would swell up.

This process was later performed on the human body (in the image on the right): the physician tied a tight ligature onto the upper arm of a person. This would cut off blood flow from the arteries and the veins. When this was done, the arm below the ligature was cool and pale, while above the ligature it was warm and swollen. The ligature was loosened slightly, which allowed blood from the arteries to come into the arm, since arteries are deeper in the flesh than the veins. When this was done, the opposite effect was seen in the lower arm. It was now warm and swollen. The veins were also more visible, since now they were full of blood. Harvey then noticed little bumps in the veins, which he realized were the valves of the veins discovered by his teacher, Hieronymus Fabricius. Harvey tried to push blood in the vein down the arm, but to no avail. When he tried to push it up the arm, it moved quite easily. The same effect was seen in other veins of the body, except the veins in the neck. Those veins were different from the others – they did not allow blood to flow up, but only down. This led Harvey to believe that the veins allowed blood to flow to the heart, and the valves maintained the one way flow.

Contrary to a popular misconception, Harvey did not predict the existence of capillaries. His observations convinced him that direct connection between veins and arteries are unnecessary; he wrote “blood permeates the pores” in the flesh and it is “absorbed and imbibed from every part” by the veins. (Wikipedia) 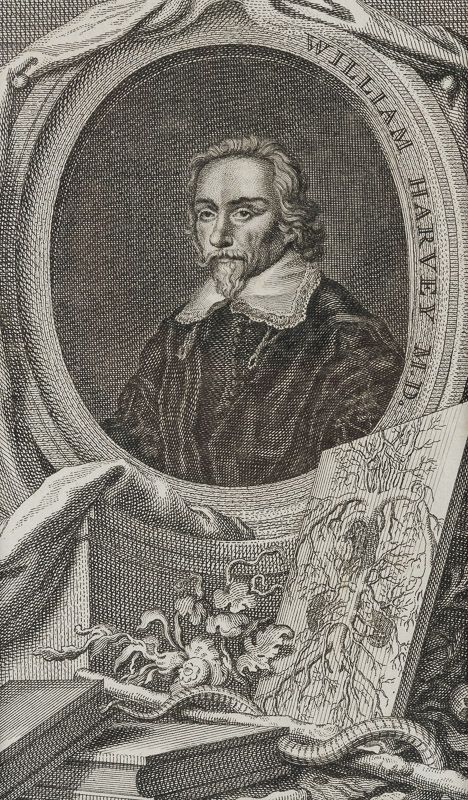 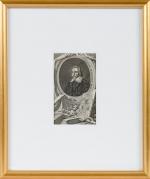