Collection / Archive of three (3) very large gicleé prints of original drawings from the book “Where the Wild Things are” by Maurice Sendak of which one is beautifully signed by Maurice Sendak. The collection includes: ‘Off to Bed without their Supper’ (signed) / ‘Let the Wild Rumpus Start’ (I and II).

Maurice Bernard Sendak (June 10, 1928 – May 8, 2012) was an American illustrator and writer of children’s books. He became widely known for his book Where the Wild Things Are, first published in 1963. Born to Polish-Jewish parents, his childhood was affected by the death of many of his family members during the Holocaust. Sendak also wrote works such as In the Night Kitchen, Outside Over There, and illustrated many works by other authors including the Little Bear books by Else Holmelund Minarik.

Sendak gained international acclaim after writing and illustrating Where the Wild Things Are, edited by Ursula Nordstrom at Harper & Row. It features Max, a boy who “rages against his mother for being sent to bed without any supper”. The book’s depictions of fanged monsters concerned some parents when it was first published, as his characters were somewhat grotesque in appearance. Before Where the Wild Things Are, Sendak was best known for illustrating Else Holmelund Minarik’s Little Bear series of books.

Sendak later recounted the reaction of a fan: “A little boy sent me a charming card with a little drawing on it. I loved it. I answer all my children’s letters – sometimes very hastily – but this one I lingered over. I sent him a card and I drew a picture of a Wild Thing on it. I wrote, ‘Dear Jim: I loved your card.’ Then I got a letter back from his mother and she said: ‘Jim loved your card so much he ate it.’ That to me was one of the highest compliments I’ve ever received. He didn’t care that it was an original Maurice Sendak drawing or anything. He saw it, he loved it, he ate it.″

Almost fifty years later, School Library Journal sponsored a survey of readers which identified Where the Wild Things Are as a top picture book. The librarian who conducted it observed that there was little doubt what would be voted number one and highlighted its designation by one reader as a watershed, “ushering in the modern age of picture books”. Another called it “perfectly crafted, perfectly illustrated … simply the epitome of a picture book” and noted that Sendak “rises above the rest in part because he is subversive.” (Wikipedia) 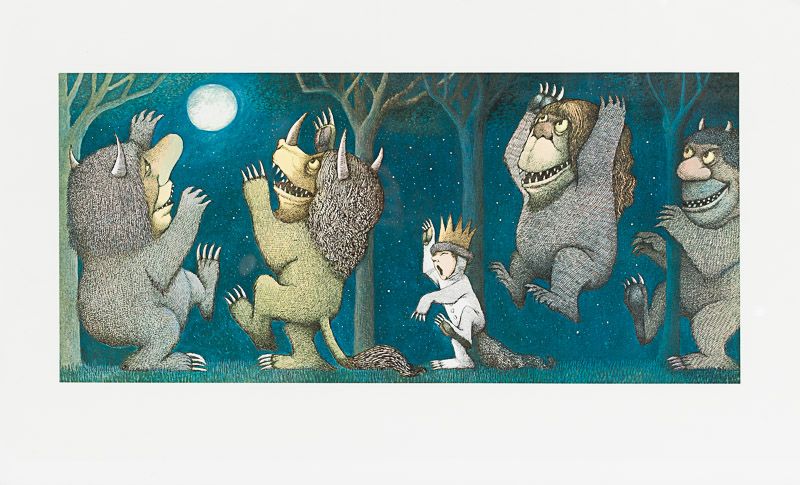