Peters, The Eldorado of the Ancients.

The Eldorado of the Ancients. With Two Maps and Ninety-Seven Illustrations from Original Drawings from Tennyson Cole and from Photographs.

Includes, for example, the following: Among the Makalanga / Spring on the Zambesi / The Kingdom of the Macombe / Ancient Ruins of Manicaland / The Gold of Ophir / Connection with Ancient Egypt / Mines, Railways and Harbours etc.

Explorer, advocate, journalist and philosopher Carl Peters (1856-1918) ranked among Germany’s most prominent imperialists in the Bismarckian and Wilhelmine periods. In the 1880s he emerged as a leader of the colonial movement and became known as the founder of Deutsch-Ostafrika, a region many Germans regarded as the pearl of their overseas possessions during the “Scramble for Africa.” Later, in Nazi Germany he was revered as a pioneering theorist and practitioner in the struggle for Lebensraum. (Wikipedia)
In 1884, Peters helped establish the “Society for German Colonisation” [Gesellschaft für Deutsche Kolonisation], an organisation that sought to build public support, and lobby the government for the creation of an overseas colonial empire. Between 1884 and 1891 he also travelled to East Africa on four occasions and acquired treaties of dubious legality with local rulers, which eventually led to the creation of an extensive German protectorate in the region.
Following the Anglo-German Heligoland Treaty, Peters was made a commissioner to German East Africa in 1891. By 1895 rumours reached Germany of his brutal treatment of the natives and he was recalled from German East Africa to Berlin. In 1897 Peters was officially condemned for his cruelty and was dismissed from government service. (Encyclopedia Britannica)
Relocated to London, Peters set up an independent company, the “Dr Carl Peters Exploration Company”, which funded several trips to German East Africa and to British territory around the Zambezi River. His adventures formed the basis of his book “The Eldorado of the Ancients” ( Im Goldland des Altertums) in which he described the region as being the biblical lands of Ophir. The fabled wealth of the region would, in Peters’ outlook, provide another argument for further German colonisation. Ophir, and its supposed loaction, was an area of interest for Biblical scholars and, in the 19th Century, for advocates for imperial expansion who were keen to gain perceived Biblical support for their endeavours. 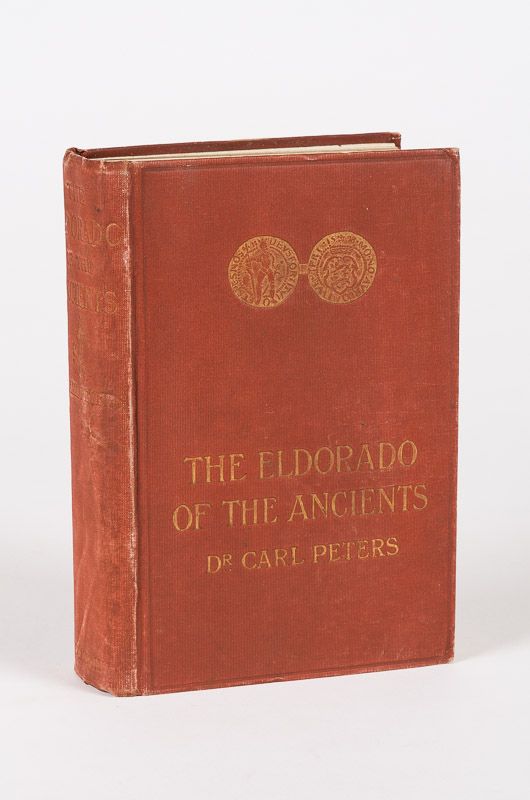