Twining, Illustrations of the Natural Orders of Plants With Groups and Descripti

Illustrations of the Natural Orders of Plants With Groups and Descriptions. [With 160 full-page chromolithographic plates in colour].

Original Sampson Low Edition – Reduced from the Original Folio Edition. Two Volumes (complete set). London, Sampson Low, Son and Marston, 1868. Slim-Quarto (17 cm x 25 cm). Volume I: XII, 80 plates / Volume II: [6], 80 plates. Both Volumes include the tissue-guards for protecting the plates and all corresponding explanatory text and Index is present. Hardcover / Original publisher’s half-leather with gilt lettering and ornament on spine. One of the earliest and rarest publications with chromolithographic botanical illustrations. Excellent condition besides some mild, faded dampstains to some plates. Important: These bindings are usually broken, which is NOT the case here. While the book came from the library of Daniel Conner (Connerville / Manch House), the book belonged to Henrietta L. Conner [Inscribed by Sophia Perry Hornik to Henrietta L. Conner in 1890].

The plates in this work depict plants arranged by botanical families using de Candolle’s classification; where a family is known to include a British member this is included, and each plate includes between two and seven members of each family. This method produces fascinating groupings of plants seldom seen together: British with Amazonian, Italian with Himalayan, etc. The plants are generally arranged with a fine artistic sensibility on the plate, but clearly retain a careful regard for scientific accuracy. (Description by Eugenio Donadoni)

Elizabeth Twining (1805–1889) was an English painter, author, and botanical illustrator. She is best known for her detailed botanical illustrations, especially the two-volume Illustrations of the Natural Order of Plants, which was published between 1849 and 1855. She was an heiress of the Twinings family of tea merchants and was a philanthropist.
Elizabeth Twining was born in 1805 into the Twinings tea-merchant family, she was one of the nine children of Richard Twining by his wife Elizabeth Mary Smythies. She was raised in London, where she learned art and drawing as part of her education, during which she was inspired by Curtis’s The Botanical Magazine and the gardens of the Royal Horticultural Society at Chiswick. Elizabeth began to draw plants and flowers, and practiced by making sketches from works in the Dulwich Picture Gallery. She was able to visit famous museums with her father’s patronage.

Elizabeth Twining wrote and illustrated a number of books on the subject of botany, most notably the two-volume Illustrations of the Natural Order of Plants (volume I published in 1849: volume II in 1855), which included 160 hand-coloured lithographs in royal-folio size, which were reportedly based on observations made at the Royal Botanical Gardens in Kew, and at Lexden Park in Colchester. The subsequent 1868 quarto-size edition features cheaper colour-printed plates, as a consequence of the transition from expensive hand-colouring to a lower-quality alternative. Elizabeth Twining resided at the old family residence of Dial House, in Twickenham. She died in 1889, and, in her will, Dial House was given to the people of Twickenham for use as the vicarage. Most of her original artwork is now part of the collection of the British Museum. She is buried in Twickenham Cemetery. Elizabeth was an elder sister of the social reformer Louisa Twining. (Wikipedia) 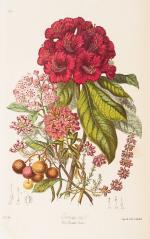 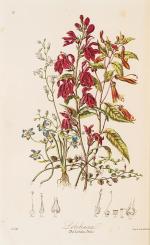 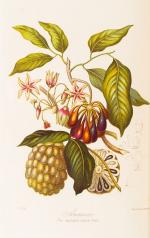 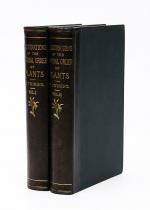 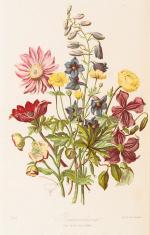