[Carew, Calendar of the Carew Manuscripts, Preserved in the Archiepiscopal Libra

Calendar of the Carew Manuscripts, Preserved in the Archiepiscopal Library at Lambeth, 1589 – 1600. Edited by J.S.Brewer and William Bullen.

Fantastic original source with lengthy Introduction over 100 pages in which a summary of events are given about the situation in Munster and the general State of Ireand at “Mary’s accession”:

″On the death of Edward VI. in 1553, Sir Thomas Cusack, chancellor, and Gerald Aylmer, were appointed Lord Justices in Ireland, and continued to hold office until the arrival in Dalkey of the new Deputy, Sir Anthony Saintlegger, who succeeded Sir James Croft on the 19th of November 1553.
Of the State of Ireland at Mary’s accession, the report of Cusack, noticed in the preface of the last Volume, gives the most trustworthy and accurate description. In Munster, beyond the Pale, the whole country ws in such “good quiet” that the judges kept their circuits, not only in Limerick, Cork and Kerry, but in the most distant shires of the West, without fear or molestation. The Desmonds, the Barries, the McCarthy Mores and others, the most troublesome and refractory of the Irish chiefs, were content to remain in peace themselves, and to compel the rest of their countrymen to do the same. They accepted the Queen’s Commission and acted jointly with the law officers of the Crown. In Connaught, the Earl of Clanricarde, lately restored to his inheritance, gladly submitted to the arrangements made by Cusack out of gratitude to his English supporters. His subjects turning their swords into ploughshares, abandoned their old habits of plunderfor more peaceful, if not more congenial, occupations. McWilliam Burke, the second captain and the most powerful man of the province, was “of honest conformity” and was ready to support the Earl, or any other Chief, in promoting the King’s Service. The O’Connor’s, the McDermotts, the O’Kellies, men of subordinate authority and influence, either found resistance hopeless or readily followed the examples of their superiors.” [cited from the Introduction].

George Carew, 1st Earl of Totnes (29 May 1555 – 27 March 1629), known as Sir George Carew between 1586 and 1605 and as The Lord Carew between 1605 and 1626, served under Elizabeth I during the Tudor conquest of Ireland and was appointed President of Munster. He was an authority on heraldry and the author of Carew’s Scroll of Arms 1588, Collected from Churches in Devonshire etc., with Additions from Joseph Holland’s Collection of Arms 1579.
Carew was appointed President of Munster on 27 January 1600, at the height of the Nine Years War and landed with Lord Mountjoy at Howth Head a month later. He enjoyed wide powers, including imposition of martial law, and excelled in the politics of divide and rule. He interviewed the successor to the Earl of Clancarty, Florence MacCarthy, in the spring of that year, after an unjust attack by presidency forces on the MacCarthy territories prior to his arrival. He was present as a guest when the Earl of Ormond was seized by the O’Mores at a parley in the same year, and managed to escape with the Earl of Thomond through a hail of daggers. At about this time he put down the supporters of the Súgán Earl of Desmond, and in October the lawful Desmond heir, James FitzGerald, was restored to the title in a limited degree. In August, Carew had accepted a reinforcement of 3,000 troops from England, but in the following May was dismayed when Mountjoy took 1,000 from him to supplement the crown army in its northern campaign, at a time when the threat of a Spanish landing in the south was at its highest.

Although he had been distrusted by Essex, owing to his sympathy with the Cecils—in 1598 Essex had encouraged his despatch to Ireland, in order to remove his influence from court—Carew’s support was welcomed by Mountjoy (who had overtaken his own master, Essex). Cecil did seek his recall from the Irish service, as much for his own political ends, as out of friendship, and tried to manipulate Mountjoy into recommending this. But Carew remained on and, although he failed to intercept Hugh Roe O’Donnell on the rebel’s remarkable march southward to relieve the Spanish forces at Kinsale in the winter of 1601, he did great service before and after the Battle of Kinsale, as he raided castles in the surrounding region in order to remove the advantage the Spanish had expected upon their landing. In the course of this campaign, his violence devastated the rebels and the peasantry, and his conduct of the siege of Dunboy castle, the last major engagement in Munster during the war, was ruthless.

Carew proved unpopular with elements of the Old English élite in Ireland, particularly over his strong opposition to the privileges enjoyed by the municipal corporations under royal charter. On the death of Elizabeth I, he was confronted unexpectedly with serious civil disorder, when several towns under his jurisdiction refused to proclaim the new King James I. The motives for these disturbances are obscure, but probably combined a desire for greater religious toleration with a demand for greater recognition of their civic independence. The trouble was especially severe in Cork, where serious rioting broke out. Carew was forced to send troops to restore order, and later tried, without success, to have the Cork city fathers tried for treason. His severe attitude is explained by his personal interest in the matter since Lady Carew’s life was said to have been threatened during the riots, and she had been forced to take refuge in Shandon Castle.

After the subjugation of Ireland, Carew sought recall to England, with failing health and anxieties of office affecting him. But it was only on Mountjoy’s resignation from the office of lord lieutenant that he was permitted to return, whereupon he was replaced as president of Munster. Under King James I he enjoyed immediate and lasting favour. In 1603 he was appointed receiver-general and vice-chamberlain to the queen. In 1604 Carew was elected Member of Parliament for Hastings in the House of Commons of England. He was raised to the peerage as Baron Carew, of Clopton on 4 June 1605. In 1608 he was Master of the Ordnance.

In 1610 Carew was appointed Governor of Guernsey. He visited Ireland to report on prospects for a settlement and plantation of Ulster, and discovered rapid improvements and recovery in the country. He also suggested the creation of new boroughs in the northern province, in order to ensure a Protestant majority in the forthcoming parliament, a suggestion that was successfully adopted in 1613. He became a privy councillor in 1616. In 1618 he pleaded to the crown for the life of Sir Walter Raleigh—they had been intimate for 30 years—and his wife was a kind friend to the family after Raleigh’s execution.
On the accession of Charles I in 1626, Carew became treasurer to Queen consort Henrietta Maria of France. He was further honoured when he was made Earl of Totnes on 5 February 1626.

Carew had a considerable reputation as an antiquary and was a friend of William Camden, John Cotton, and Thomas Bodley. He gathered a large collection of materials relating to Irish history and pedigrees, which he left to his secretary, Sir Thomas Stafford (supposed to be his illegitimate son). A portion has disappeared, but 39 volumes that came into Laud’s possession are now held in Lambeth Palace Library, and a further four at the Bodleian Library. A calendar of the former was published in six volumes between 1867 and 1873, edited by J. S. Brewer and W. Bullen, under the title Calendar of the Carew Manuscripts preserved in the Archiepiscopal Library at Lambeth. Carew’s correspondence from Munster with Sir Robert Cecil was edited in 1864 by Sir John Maclean for the Camden Society, and his letters to Sir Thomas Roe (1615–1617) in 1860.

In the introduction to the Calendar of Carew Manuscripts the date of his birth is given as 1558, and his admission into Broadgates Hall in 1572, aged 15. In the preface to Carew’s Letters to Sir Thomas Roe it is given as 1557.

Other letters or papers are in The National Archives; among the manuscripts at the British Library; and calendared in the Historical Manuscripts Commission reports on the Marquess of Salisbury’s manuscripts. Stafford published after Carew’s death “Pacata Hibernia, or the History of the Late Wars in Ireland” (1633), the authorship of which he ascribes in his preface to Carew, but which has been attributed to Stafford himself. This was reprinted in 1810 and re-edited in 1896. A Fragment of the History of Ireland, a translation from a French version of an Irish original, and King Richard II in Ireland from the French, both by Carew, are printed in Walter Harris’s Hibernica (1757). According to Anthony Wood, Carew contributed to the history of the reign of Henry V in John Speed’s Chronicle. His opinion on the alarm of the Spanish invasion in 1596 has also been printed. (Wikipedia) 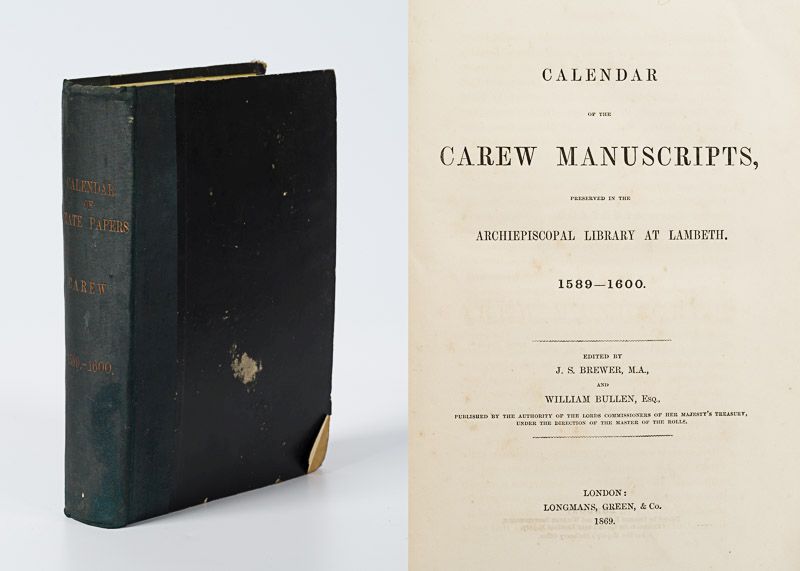 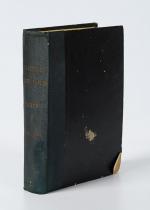 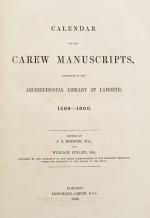