[More than 90 Volumes in total]. Frankfurt / Zurich / Bargfeld, Hoffmann & Campe / S.Fischer / Haffmanns / Arno-Schmidt-Stiftung, c.1971 – 2016. Diverse Formate: Octavo / Folio / Quarto. Mehr als 20000 Seiten. Original Hardcover / Original Softcover. Besides some minor signs of external wear to some of the Volumes, some mild foxing etc., the collection is overall in either very good or excellent condition. Please see detailed and extensive photographic evidence of the collection on our website. [The price for this heavy and opulent collection includes worldwide free shipping per UPS Express Courier (2 – 7 days of international express-shipping per UPS Express Saver)].

Arno Schmidt (18 January 1914 – 3 June 1979) was a German author and translator. He is little known outside of German-speaking areas, in part because his works present a formidable challenge to translators. Although he is not one of the popular favourites within Germany, critics and writers often consider him to be one of the most important German-language writers of the 20th century.
Born in Hamburg, the son of a police constable, Schmidt moved in 1928, after the death of his father (1883-1928), with his mother (1894-1973), to her hometown of Lauban (in Lusatia, then Lower Silesia, now Poland) and attended secondary school in Görlitz as well as a trade school there. After finishing school, he was unemployed for some months and then, in 1934, began a commercial apprenticeship at a textile company in Greiffenberg. After finishing his apprenticeship he was hired by the same company as a stock accountant. Around this time, at his company, he met his future wife, Alice Murawski. The couple married on 21 August 1937; they had no children. At the outset of World War II, in 1939, Schmidt was drafted into the Wehrmacht, where his mathematical skills led him to be assigned to the artillery corps. He first served in Alsace and after 1941 in fairly quiet Norway. In 1945, Schmidt volunteered for active front duty in Northern Germany, in order to be granted a brief home visit. As the war was obviously lost, he used this visit to organise his wife’s and his own escape to the west of Germany, in order to evade capture by the Red Army, which was known for its much harsher treatment of prisoners of war and German civilians. Schmidt gave himself up to British forces in Lower Saxony. As refugees, Schmidt and his wife lost almost all of their possessions, including their cherished book collection.

After an interlude as an English POW and later as an interpreter at a police school, Schmidt began his career as a freelance writer in 1946. Since Schmidt’s pre-war home in Lauban was now under Polish administration, Schmidt and his wife were among the millions of refugees moved by the authorities to numerous places in what was to become West Germany. During this time of uncertainty and extreme poverty, the Schmidts were sustained by CARE Packages his sister sent them from the US (his sister Lucie had emigrated to the US in 1939, together with her husband Rudy Kiesler, a Jewish German communist). Temporary accommodations led the Schmidts to Cordingen (near Bomlitz), Gau-Bickelheim, and Kastel (the latter two in the newly formed state of Rhineland-Palatinate). In Kastel, he was accused in court of blasphemy and moral subversion, then still considered a crime in some of the Catholic regions of Germany. As a result, Schmidt and his wife moved to the Protestant city of Darmstadt in Hesse, where the suit against him was dismissed. In 1958, the Schmidts moved to the small village of Bargfeld, where they were to stay for the rest of their lives, Schmidt dying in 1979, his wife Alice in 1983.

Schmidt was a strict individualist, almost a solipsist. Disaffected by his experience of the Third Reich, he had an extremely pessimistic world view. In Schwarze Spiegel (Black mirrors), he describes his utopia as an empty world after an anthropogenic apocalypse. Although he was not a deist in the conventional sense, he maintained that the world was created by a monster called Leviathan, whose predatory nature was passed on to humans. Still, he thought this monster could not be too powerful to be attacked, if it behooved humanity.

His writing style is characterized by a unique and witty style of adapting colloquial language, which won him quite a few fervent admirers. Moreover, he developed an orthography by which he thought to reveal the true meaning of words and their connections amongst each other. One of the most cited examples is the use of “Roh=Mann=Tick” instead of “Romantik” (revealing romanticism as the craze of unsubtle men). The atoms of words holding the nuclei of original meaning he called Etyme (etyms).

His theory of etyms is developed in his magnum opus, Zettels Traum, in which an elderly writer comments on Edgar Allan Poe’s works in a stream of consciousness, while discussing a Poe translation with a couple of translators and flirting with their teenage daughter. Schmidt also accomplished a translation of Edgar Allan Poe’s works himself (1966–1973, together with Hans Wollschläger). Some critics even dismissed Zettel’s Traum as non-art, or sheer nonsense, and Schmidt himself as a “psychopath.” But Schmidt’s reputation as esoteric, and that of his work as non-art, has faded and he is now seen as an important, if highly eccentric, German writer of the 20th century.

In the 1960s, he authored a series of plays for German radio stations presenting forgotten or little known and—in his opinion—vastly underrated authors, e.g. Johann Gottfried Schnabel, Karl Philipp Moritz, Leopold Schefer, Karl Ferdinand Gutzkow, and others. These “plays” are basically talks about literature with two or three participants plus voices for quotations (Schmidt lent his voice for his translations of Finnegans Wake quoted in Der Triton mit dem Sonnenschirm [1961]). Eleven of these so-called “Radio-Essays” were republished on 12 audio CDs in the year 2003.

As none of his works sold more than a few thousand copies (Schmidt openly admitted that he only wrote for the small handful of people who could appreciate his work), he lived in extreme poverty. During the last few years of his life, Arno Schmidt was financially supported by the philologist and writer Jan Philipp Reemtsma, the heir of the German cigarette manufacturer Philipp F. Reemtsma. Schmidt’s final completed novel was Abend mit Goldrand (1975) which was praised by some critics for its verbal inventiveness, although many had a difficult time digesting the erotic themes of the book. He died in a hospital in Celle on 3 June 1979 after suffering a stroke. 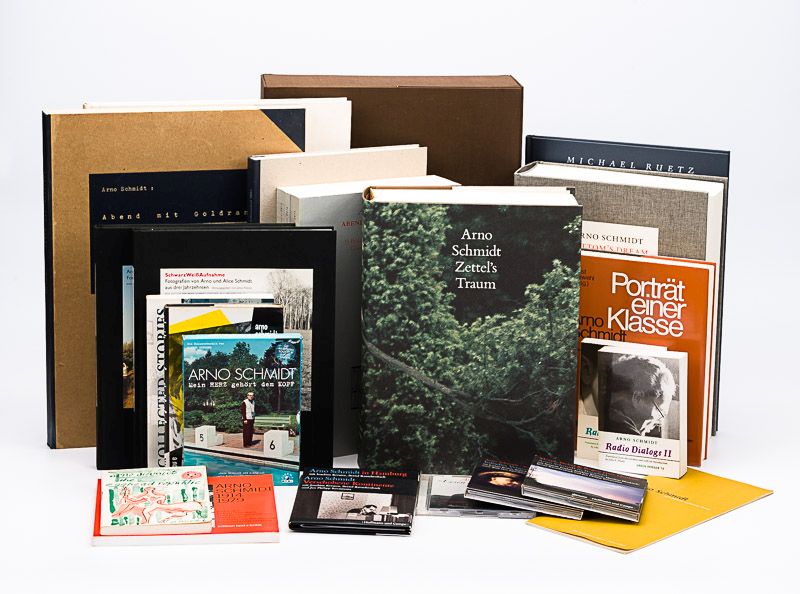 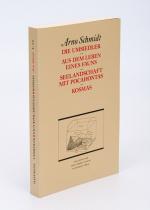