Gilman, The Saracens - From the Earliest Times to the Fall of Bagdad.

The Saracens – From the Earliest Times to the Fall of Bagdad. With maps, many illustrations, a chronological table and a list of books treating the subject.

The illustrations and maps include: View of Mecca in the seventeenth Century (from Müller’s “Islam”) / Ruins of Feiran, showing two Wadies / Mount Hor on the Route from Arabia to Paletsine / The Mosque at Mecca / View in Petra on the Route from Arabia to Palestine /Tomb of Fatima at Damascus / Bedawin Women from Baalbek / The Kaaba / Interior of the Mosque of Oman at Jerusalem / The Mosque of Omar at Jerusalem / Arabian Weapons of different Periods / Arabian Women, Water-Carriers / A Pilgrim Encampment near Medina / View in Medina / Mohammed /Seals of the early Kalifs Abu Bekr, Omar, Othman, Ali / Map of Damascus and the region around / Voew of a portion of the walls of Jerusalem / Interior of the mosque of Amr at Cairo / A Mosque at Isfahan / Genealogical Line of the Kalifs from Abu Bekr to Radi / A yound syrian Girl / Interior of the Mosque at Ispahan / Ancient Mosque of Kairwan / View of Tunis / View of the Mosque of Hasan at Cairo / Coins of the early Kalifs / Enclosure of teh Mosque of Omar at Jerusalem / An Algerian Berber / Plain of the Tombs and Mosque of Mehemet Ali at Cairo / Court of the Great Mosque of Damascus / Coin of Mehdi / Water-Merchants of Cairo / Coin of the Kalif Mamun / A suburb of Damascus / An arabian encampment / General View of Cairo / Map of Constantinople and the regions about / View of a Mosque at Bagdad / Coin of the Kalif Radi / Gold Coins of the Fatimite Kalifs, 1050 and 1072 A.D. / Arabian bread-sellers at Jerusalem / Walls of Damascus /

Includes for example the following chapters: The Camel-Driver of the Desert, The Month Ramadan, Islam, Jerusalem Captured, Palestine and Mesopotamia Conquered, By Bagdad’s Shrines. 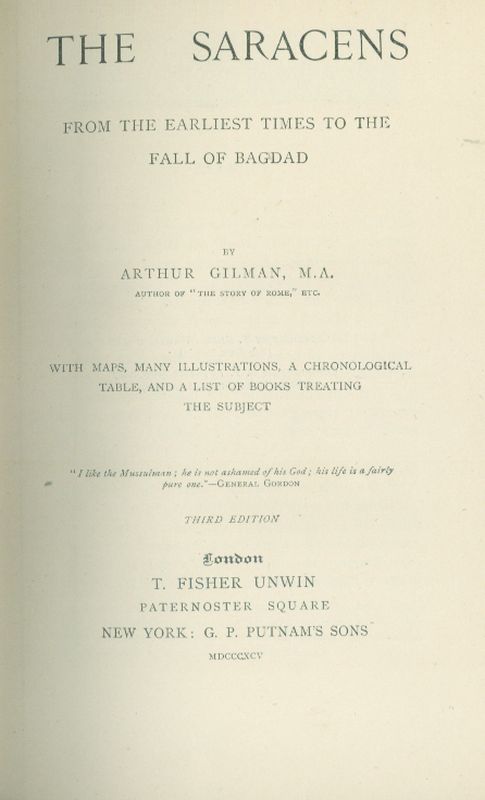