The End of Ideology. On the Exhaustion of Political Ideas in the Fifties.

A System of Geography, Popular and Scientific, or A Physical, Political and Statistical Account of the World and Its Various Divisions. Illustrated by a Complete Series of Maps and other Engravings. [With 44 Fold-out Maps [often with inset-engravings], 13 Decorative Views of Cities and Landscape in steel-engravings and one (1) “Large Fold-Out-Plan about the Political Scale of the Globe”]. 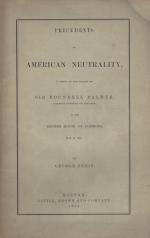 Precedents of American Neutrality, in Reply to the Speech of Sir Roundell Palmer, Attorney General of England in the british Commons, May 13,1864. 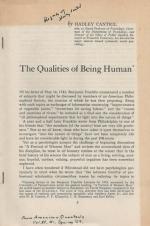 The Qualities of Being Human [Inscribed and signed by Hadley Cantril].

“The Crisis” – [Important collection on the Great Lincoln – Douglas Debate in 1858 – Including the First Edition of “The Crisis”, the ultimate association-copy, inscribed by american novelist Winston Churchill to Robert Roberts Hitt, shorthand note-taker during the Great Debates of 1858 and personal friend of Abraham Lincoln, with a lengthy inscription by Churchill: “My Dear Mr. Hitt – Please forgive me for nagging you with this book – think dismissed. I take this opportunity of expressing my gratitude for the help you gave me. And I hope that my portrait of the Great American [Abraham Lincoln] may not offend you, who knew him so well”. Hitt comments with a full-page shorthand-notation in the front of the book, included are letters exchanged between Churchill and Hitt: 3 autographed letters (signed by Churchill) 1 typed letter (signed by Churchill). The letters focus on Churchill questioning Hitt especially on the Freeport debate and Lincoln’s mood the night before. He introduces the plot of the book “The Crisis” to Hitt and questions the authenticity versus what Hitt recalls of that day. Churchill schedules a visit with Hitt to interview him etc. etc. / Also included are contemporary newspaper-clippings which Hitt loosely inserted, one original Union Presidential Ticket (Darke County, Ohio), for President Abraham Lincoln of Illinois, for the Election on November 8, 1864 as President and for Vice President Andrew Johnson / also included is one original National Democratic Ticket for his opponent in Darke County, George B. McClellan for President and for Vice President, George H. Pendleton / Also included: Roy S. Younglove’s personal copy of the important publication on the Lincoln – Douglas Debates of 1858 by Edwin Erle Sparks (see plenty of images on this collection on our website) / Also included: Two offprints on the Lincoln-Douglas Debates: 1: Frederick Trevol Hill – The Lincoln-Douglas Debates – Fifty Years After – A New Account of the Forensic “Seven Days” Battle (Offprint from “The Century Magazine, 1908”/ 2. Noah Brooks – Lincoln’s Reelection – Lincoln’s Second Inauguration – The Beginning of Lincoln’s Second Term – The President’s Shrewdness at Hampton Roads (Offprint) / 3. Reprint of “″A Reception by President Lincoln” by C. van Santvoort].

New York / Springfield / St.Louis / Mount Morris / Windsor (Vermont), The Macmillan Company / Illinois State Historical Library, 1900 – 1908. Octavo. Pagination of “The Crisis”: Frontispiece – Illustration, IX, 522, [2] pages with Illustrations by Howard Chandler Christy / Pagination of “The Lincoln-Douglas Debates of 1858” by Edwin Erle Sparks: Portrait-Frontispiece of Abraham Lincoln, XI, 627 pages with many photographs. Original Hardcover. Excellent condition with some minor signs of wear only. The newspaper-clippings, the letters and the Presidential Election Tickets are all preserved in protective sheets. The newspaper-clippings are a little brittle. One of the letters is torn. The books and the inscription and the other manuscript letters and the typed letter are all in excellent condition. A very rare collection on American History and the origins and History of campaigning in american elections. From the private collection of Robert Roberts Hitt, one of Lincoln’s employee’s and personal friends during his legal days in Chicago. Hitt was notably mentioned, introduced and honored with a portrait in the publication on the Great Debate by Edwin Erle Sparks (see portraits and more images on our website). 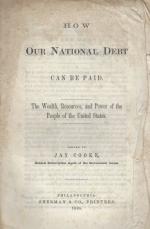 How our National Debt can be paid. The Wealth, Resources and Power of the People of the United States. Prepared by Dr.William Elder, of the Treasury Department.