Collection of manuscript material, offprints, association-copies and books from the library and personal collection of Professor Henry David Aiken, American Philosopher, specialist on Analytic Philosophy, Aesthetics, Ethics and Education at the Universities of Columbia, Harvard, Michigan and Brandeis. The collection reflects Aiken’s deep connections to the important postwar-period of great thinkers at American Universities like Harvard and Brandeis. Aiken was friends with Daniel Bell, Arnold Kaufman, Stephen Toulmin, Israel Scheffler. Aiken’s “Beloved teacher” and mentor was Ralph Barton Perry (see his dedication in “Predicament of the University”). More importantly, Aiken was accepted as scholar and friend around important thinkers like Willard Van Orman Quine, Alfred North Whitehead, Robert Nozick and John Rawls. The collection includes first edition offprints from nearly all of these mentioned. The collection also includes materials previously inscribed and gifted to fellow philosophers in Aiken’s circle of friends, now reunited with this Archive. [Please enquire for access to excellent photographs and descriptions to each title, included in this collection]. The collection includes for example the Proof of Aiken’s publication “The Predicament of the University” [Working-Title: “The Future of the University”] – This title is of great interest alone, with Aiken’s annotations. Also included is the first edition of Aiken’s personal copy of his Thesis for the Degree of Bachelor of Arts: “Hegel’s Philosophy of Fine Art – A Study with special reference to the Theory of Tragedy”. Among the collection are roughly 200 offprints, often with dedications and inscriptions to colleagues. [Each title is listed in detail, with images, on our website under “Libraries & Collections” (click on “Henry D. Aiken Collection”).

Vita de Sancto Hieronymo [with original manuscript letter by Philip Hofer, later Curator of the Department of Printing and Graphic Arts at Harvard’s Houghton Library, discussing his work at the [Pierpont] Morgan Library and the first product of Cygnet Press, “Vita de Sancto Hieronymo”, which he and George Parker Winship had produced 6 years earlier: “The little book which accompanies this note is one which George Parker Winship and I set by hand and printed a few years ago. It amused us, and, I hope, will amuse you. Of course we would do it differently now – that is always the way !”. The letter, on Hofer’s stationery with his address at 14 East Ninetieth Street, is addressed to one Dr. Collija in Stockholm, on June 25, 1934 and Hofer reminisces about the wonderful time he had there and how he wants to return to Sweden. 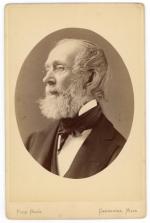 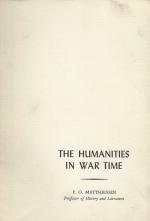 The Humanities in War Time.

Manuscript Letter, signed (MLS) by Alice Freeman Palmer, American educator, President of Wellesley College, Dean of Women at then newly founded University of Chicago and most importantly, Advocate for College Education for Women. The letter, written in Cambridge, Mass. on March 16th, 1899 comes in its original envelope and is a wonderful example for her caring personality not only for women’s education but also for a mother’s anxiety who was worried about her son’s education and who found the courage to write to Alice Freeman Palmer and ask for her help. The six-page-manuscript-letter is addressed to a Mrs. Richmond in Adams, Massachusetts. Alice Freeman Palmer responds to Mrs. Richmond’s worries that her son may not be able to afford a second year at Harvard University. Alice Freeman Palmer writes: “My dear Mrs. Richmond, I have read your letter with the warmest interest and have discussed the possibilities with my husband, who is a Professor in Harvard. He has seen the Dean in confidence and they will do all they can to secure some Price Greenleaf Aid for your son for next year – as much as possible. Dean Briggs will send a blank to your son which he should fill out and return. I think the decision is mde here in June and then you will know how much you can reky on from that source. If your son decides to return to Harvard, my husband wil secure one hundred and fifty dollars in addition, to pay his tuition from a fund which he has for students whom he wishes to help; so that he can have any Greenleaf aid he receives & use in addition to his tuition bills. For how much can he get on in Cambridge ? We will do all we can to secure him work and as will the Dean but we cannot be sure there are as many students applying for the same thing. We hope he will get $ 250 from the Gren Leaf Fund. If he does and has 150.00 for his tuition, would it not be wise for him to come, hoping that you might do a little for him, and might get some work from time to time and live very economically, and so get through the year. He must do such good work in his sophomore year that he can stand a chance for a scholarship at the end, and I should think that would be likely. I hope very heartily that he can return to Harvard and you may be sure that we will help him in any way we can. He must come and see us at once and let me know how we can assist him. We shall hold your letter in strict confidence you may know. You can trust the Dean absolutely and his help is essential in getting your son the aid he needs; for the numbers who need aid quite as sorely are many more than the means to aid them. But your letter has made me feel that a boy as Frailed as yours deserves the chances to finish his college course, and I hope he can find a way to the next three years without any more delay. Let us hope too that your husbands business will improve, and your anxieties be removed and the other boys find their way after too ! Sincerley Yours, Alice Freeman Palmer”. [The Letter was loosely inserted in to an edition of George Herbert Palmer’s publication: “The Life of Alice Freeman Palmer”. The book is part of this collection.

Francis Parkman’s Works – Frontenac Edition. The collection includes: Volume I and II: “Pioneers of France in the New World” / Volume III and IV: “The Jesuits in North America” / Volume V: “LaSalle and the Discovery of the Great West” / Volume VI and VII: “The Old Regime in Canada” / Volume VIII: “Count Frontenac and New France under Louis the XIV” / Volume IX and X: “A Half Century of Conflict” / Volume XI, XII, XIII: “Montcalm and Wolfe” / Volume XIV and XV:″The Conspiracy of Pontiac and the Indian War after the Conquest of Canada” / Volume XVI: “The Oregon Trail, Sketches of Prairies and Rocky-Mountain Life” / Additional Volume [the so-called Volume XVII: “A Life of Francis Parkman” (by Charles Haight Farnham) //

17 Volumes [complete set of 16 Volumes plus the often missing Biography]. Boston, Little, Brown and Company, 1902 – 1904. Octavo. More than 6000 pages. Frontispiece with tissue-guard to each Volume. Photographic illustrations and occasionally maps within the text. Original Hardcover (blue publisher’s cloth with original spinelabels and as a special ephemera treat in each Volume are two spare spine-labels tipped into the rear [In case of rebinding or fading of the exisiting spine-labels]. Very good condition with only minor signs of external wear (some rubbing). From the library of Hans Christian Andersen – Translator Erik Haugaard, with Haugaard’s Exlibris to the pastedown of each Volume.