Wonderful collection of original, signed manuscript Letters by Tom Barry and his wife Leslie de Barra, addressed to Rosscarbery Woman Katty Hayes, a fellow member Cumann na mBan [The Irishwomen’s Council], together with a rare and important local History – Pamphlet on Rosscarbery by Katty Hayes, titled: “Ross of the Pilgrims” (signed and inscribed by Katty Hayes in 1977 the pamphlet includes wonderful oral history accounts put in writing by Ms.Hayes; about Coppinger’s Court, Lord Carbery in Castlefreke, Cregane House, History of the Convent of Mercy in Rosscarbery, Father John Power, Names of local landlords in the area etc.). The collection also comes with a rare vintage photograph of Katty Hayes, surrounded by some unidentified fellow members of The Irish Women’s Council [Cumann na mBan] and other Irish Republican Organizations (all wearing their medals). The collection also includes three Appreciation-Letters which Miss Hayes received back from the Vatican in the years 1969, 1977 and 1988. Miss Hayes had written to the Pontifex Paul VI as well as to Pope John Paul II and received Blessings and thanks for her Christmas – wishes to the Holy Father.

Rosscarbery (West Cork), 1969 – 1980. Octavo. Two Manuscript Letters (One signed by Tom Barry and one signed by Leslie Price) / Three Letters from Assessors of the Pope / One vintage Black and white photograph / One pamphlet called “Ross of the Pilgrims” with 51 pages of local History, forgotten Poems and songs and stories by Katty Hayes about Tom Barry and his family – relations in Rosscarbery, his friendship to Michael Collins and the local Rosscarbery community etc. etc. Original Softcover / Stapled. Very good condition with only minor signs of wear. Extremely rare little archive with Blessings from two Popes; bought from the family Archive of Katty Hayes.

Collection of four very important and meaningful manuscript letters by Leopold II to his administrator and Foreign Minister of the Congo – Free-State, Baron Adolphe de Cuvelier (1860-1931) with a total of 16 pages filled with Leopold’s instructions on pressing issues regarding a warning about an imminent visit by the Rector of the Mill-Hill Missionaries [probably Herbert Alfred Henry Vaughan (1832 – 1903)] and Leopold’s qualification of the visit of being detrimental to the Congo Free State (″ne travaillent pas pour l’État”). Leopold continues in another letter to talk about the hostile positions of english officials (consuls) and missionaries (″que les consuls anglais et les missionnaires anglais se conduisent bien mal envers l’État”). Interestingly, Leopold also touches on the nuisance of the german press criticizing Belgian Railway Lines and he is of the opinion that this is all happening in order to force the german parliament [″Reichstag”] to finance the building of the Tanganyika Railway [between Dar es Salaam and Kigoma]: (″cherche à effrayer l’opinion [en] Allemagne à propos de mes chemins de fer afin d’obtenir du Reichstag des fonds pour la ligne allemande vers le Tanganika”.

16 pages of MLS, Manuscript Letters (signed) on 10 leaves of Leopold’s official stationery “Château de Laeken” and “Palais de Bruxelles”. Laeken / Brussels, Château de Laeken [Palace of Laeken], 1901 – 1906. The leaves with different sizes (13,5 cm x 9 cm) and (18 cm x 11,5 cm). Excellent condition. Unsigned. Tremendously rare to find original letters by Leopold II on the open market in which the Colonial Free State and the protection against inquisitive visitors is discussed in such clear and instructive fashion. Leopold’s correspondence with Adolphe de Cuvelier shows how he is very much trying to still protect and influence the narrative of his Colonial Slavery Outpost even in the final years of his life.

Vita de Sancto Hieronymo [with original manuscript letter by Philip Hofer, later Curator of the Department of Printing and Graphic Arts at Harvard’s Houghton Library, discussing his work at the [Pierpont] Morgan Library and the first product of Cygnet Press, “Vita de Sancto Hieronymo”, which he and George Parker Winship had produced 6 years earlier: “The little book which accompanies this note is one which George Parker Winship and I set by hand and printed a few years ago. It amused us, and, I hope, will amuse you. Of course we would do it differently now – that is always the way !”. The letter, on Hofer’s stationery with his address at 14 East Ninetieth Street, is addressed to one Dr. Collija in Stockholm, on June 25, 1934 and Hofer reminisces about the wonderful time he had there and how he wants to return to Sweden.

The Modern Traveller. By Hilaire Belloc with pictures by B.T.B. (that is Lord Basil Temple Blackwood). Inscribed and signed: “To Sir Harry Luke, Lieut. Governor of Malta & Chairman of Toc H with Gratitude from Tully”). With two manuscript letters to Sir Harry Luke loosely inserted. LETTER No.I: The first letter is from Patrick Planket (Equerry to Queen Elizabeth II and Deputy Master of the Household of the Royal Household (1954-1975)). On his personal stationery (Mount Offham, West Malling (Kent)) Patrick Plunket thanks Luke for making him aware of the book (″The Modern Traveller”) by Hilaire Belloc to which Plunket’s uncle Basil (Lord Basil Blackwood) has contributed the illustrations. Plunket writes on August 1st, 1966: Dear Sir Harry, i am writing to say how grateful I am to you for telling me about the Modern Traveller. I have it now in front of me. Uncle Basil’s drawings are superb and depict our black brothers as I am sure they would not wish to be shown today. But especially the travellers are equally ludicrous ! In fact the whole book is a delight and will be specially treasured. It makes one even sadder that my uncle insisted on joining up when we was over-age. Yours very sincerely – Patrick Plunket”. [Blackwood was killed in action in a night raid at Boesinghe near Ypres on 4 July 1917] / LETTER No. II: The second letter included in the book is from fellow colonial administrator, Sir Thomas Scrivenor to Luke in which Scrivenor discusses Hilaire Belloc’s writing. He continues to talk about two pieces of poetry Scrivenor wrote in reference to the Corona Club and in anticipation of a Dinner when Duncan Sandy was Secretary of State for the Colonies. The two typescripts are included. 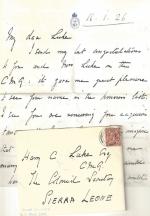 Manuscript Letter signed (MLS) from Naval Secretary Sir Frank Larken to Sir Harry Luke. The letter addressed to Luke’s posting in Freetown, Sierra Leone [Envelope reads: ‘Harry C Luke Esq. CMG – The Colonial Secreatry – Sierra Leone’ – stamped: ‘Naval Secretary to First Lord’]. Sir Frank Larken congratulates Harry Luke on receiving the CMG [‘Companion’– Most Distinguished Order of Saint Michael and Saint George]. Larken writes: ‘My dear Luke – I send my best congratulations to you and Mrs. Luke on the CMG: it gave me great pleasure to see your name in the honours list. I see you are recurring your acquaintance with Sierra Leone. I can imagine that with your interaction + talent there are many more congenial spots you would have chosen – which your wife would prefer. Does the engaging native still talk the language the amusing sample of which you used to amuse us by giving: ‘I am in a bureau – s Secretary – To a Cabinet Minister’ – You will smile. Nasmith [that is Admiral Sir Martin Eric Dunbar-Nasmith VC, KCB, KCMG (1 April 1883 – 29 June 1965)] has just gone to command the College at Dartmouth [Britannia Royal Naval College Commander from 1926 – 1929] – a very good appt. + [?] the man for it. What a nipping time you gave Martin Nasmith + myself in Jerusalem. Kind regards to Mrs. Luke. Yours Frank Larken’.

Whitehall, On Whitehall Admiralty Stationery, 1926. Octavo. 2 pages (1 sheet with writing on both sides) and envelope. From the private collection / library of colonial governor, diplomat and historian, Sir Harry Luke. 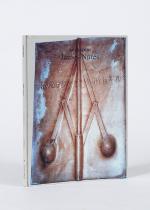 Kyoto, Kyoto Shoin, 1991. 23.3 cm x 30.9 cm. Frontispiece. 48 pages. Original Hardcover. Very good+ condition with only minor signs of external wear. Minor dampstain to page edges. Inscribed and signed by the artist James Nares to his mother and her partner Winky / WIth manuscript letter signed by James Nares to his Mum i which he also declares “I am working like crazy – Have 1 Show in Nov. (NY) in Dec. (LA + Canaray Islands) – I’m Lucky that it’s what I like to do best – Much Love – James” 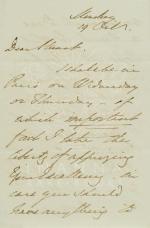 Original, unpublished and meaningful letter by British official and Permanent Under-Secretary of State for the Colonies, Sir Robert William Hay, addressed with urgency to former secret agent in Spain and Portugal, Sir Charles Stuart de Rothesay, Scottish nobleman, and English ambassador to France (1815-1830); alerting Ambassador Charles Stuart of Hay’s arrival in Paris and his wish to ask him if he has “anything to communicate to me in regard to that Royal [Baron] Rousseau, The Barbary Consul”. Hay is in this letter preparing Stuart in order to investigate the situation around the death of explorer Alexander Gordon Laing in Africa. Under-Secretary for the Colonies, Sir R[obert] W.Hay, who had been informed about the situation around Laing’s missing Journals per private letter from the British Consul in Tripoli, Hanmer Warrington, announces his arrival in Paris to protest to the French government and advices ambassador Stuart:″I conclude that he [Baron Jean-Baptiste Rousseau] is by this time out of guarantiae, but I hope that by ensuing at Paris he will only get out of the frying Pan with the fire”. Hay continues: “I hope you will go with me (in case it be necessary) to the Minister, whoever he may be, in [?] Departement this ….were incredibly false for it. The French Govt. are really disposed & prosecute the Enquiry bon a fide. I think that same may acq…[….]…..on the other hand, if the French Govt. do not enter into y. enquiry with a good spirit, it will be in Rousseau’s …..to baffle me with the utmost facility in all our attempts to get at the truth. I spoke to Lord Aberdeen [George Hamilton-Gordon, 4th Earl of Aberdeen, Foreign Secretary for Prime Minister Wellington] on the day I left London, & he gave me full permission to conduct measures with you for the …of this affair. Yours very truly R.W.Hay”. 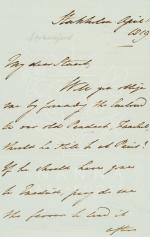 Original, unpublished letter by Anglo-Irish diplomat, Percy Clinton Sydney Smythe, 6th Viscount Strangford, to Sir Charles Stuart [Charles Stuart, 1st Baron Stuart de Rothesay], asking him for a favour to send a Lantern to an address in Paris [?]. Strangford writes from his post as British Envoy Extraordinary and Minister Plenipotentiary at the Court of Stockholm, where he was posted between 1817 and 1820.