[Betz 174 / Norwich 59].
Border with longitudinal and latitudinal information. A richly detailed and very interesting map of Africa. Many regions bear Roman/Latin nomenclature. Southern Europe, the Caucasus around the Black Sea, the Middle East, Arabian peninsula and a small section of India can be seen. The tip of the Brazilian bulge can be seen also. The map also includes the Canary Islands, Cape Verde Islands, Madagascar and a host of smaller islands off the coast of Africa. The ‘Mare Sargasse’ (Sargasso Sea) is shown west of the Canaries, along with another unnamed ‘sargasse’ lying off the south-west coast of Africa – the knowledge of these ocean gyres indicating nautical and scientific sophistication.
Africa’s vast size is well captured and reflected through the craftsmanship of the mapmaker. The African continent is subdivided into regions such as Barbaria, Nigritia, Guinea Superior, Regn Macoco and Regio Caffro and others. These, in turn, are divided further. Reliefs such as mountains and rivers are depicted. The region to the east of the Congo is noticeable for the lack of features described in it. The emptiness highlights that this area remained essentially unknown to Europeans in the 18th Century: the Great Lakes of Central Africa are yet to be explored. Major and significant cities are identified throughout the map: in Africa Benin, ‘Tomboucouton’, Gago, and St Salvator among others are identified.
An inset box containing an explanatory note regarding the accuracy of the map is located in the lower left corner of map with ‘Admonitio’ (Warning) title. Also, within box are three scales.
A highly decorative title cartouche in the top right corner of map shows a native male subduing a crocodile, elephants and a horse-riding spear-bearing rider hunting an ostrich.

Guillaume Delisle, (1675-1726), was a renowned mapmaker who led the reform of French cartography. A brother of the astronomer Joseph-Nicolas Delisle and a student of the astronomer Jean-Dominique Cassini, Delisle learned to fix accurate positions by astronomical observation. The accuracy of his continental outlines and his reduction of gross errors in determining lines of longitude were considerable improvements over earlier maps. His earliest works, published in 1700, were a pair of globes (terrestrial and celestial), maps of the continents, and a world map in hemispheres. He prepared about 100 maps and wrote on mensuration and ancient geography. At 27, Delisle was admitted into the French Académie Royale des Sciences, an institution financed by the French state. After that date, he signed his maps with the title of “Géographe de l’Académie”. Five years later, he moved to the Quai de l’Horloge in Paris, a true publishing hub where his business prospered. In 1718 he was the first to become chief geographer to the king. (Encylopedia Britannica) 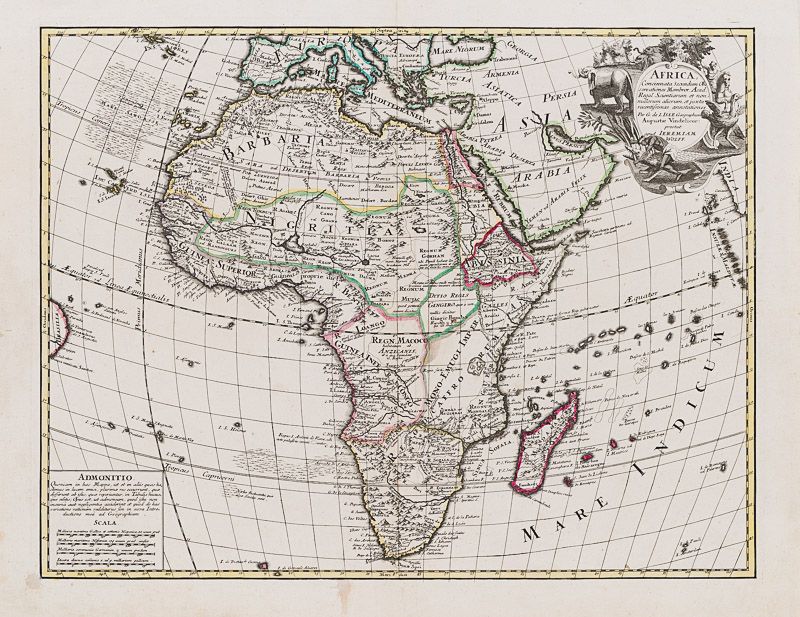 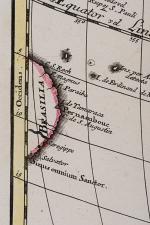 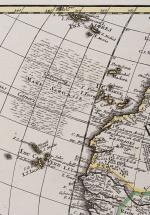 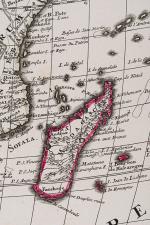 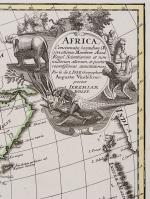