Brabazon, The Deep Sea and Coast Fisheries of Ireland, with suggestions for the

The Deep Sea and Coast Fisheries of Ireland, with suggestions for the working of a Fishing Company. Illustrated by William Cooper. Dedicated by Permission to the Commissioners of Public Works in Ireland. [With 21 Plates]

Original First Edition. Dublin / London / Derby, James McGlashan / Simpkin, Marshall & Co. / Richardson and Sons, 1848. Octavo. Folded Frontispiece, X, 111 pages with 21 plates (original Lithographs often large folding). Hardcover / Original publisher’s cloth, embossed with gilt lettering to cover. Excellent condition of one of the rarest books on the History of irish commercial fishing and suggestions for professionalizing irish fishing industry in the 19th century. This book comes from the library of irish engineer William Le Fanu, with his bookplate to the pastedown and a stamp “Board of Public Works” to the dedication-page. The books interior with all the lithographic illustrations in very good condition. Occasional foxing only. Extremely rare; very scarce publication ! This is a superior example of this book; with all illustrations in place and in excellent condition.

Includes for example the following illustrations:

Brabazon writes in his Introduction: ‘I am induced to write this account of the present state of the Irish Fisheries, and offer the following suggestions for their improvement, which may be carried into effect by a Fishing Company, conferring the greatest benefits on the country and profit to themselves. The Fisheries are the greatest, and at present almost the only resource of the West of Ireland. From the loss of the potatoes as a certain means of subsistence, the fiishermen would give their undivided time to the Fisheries, instead of losing the best seasons by wasting their labour on a high-rented potato garden. They would thus throw an immense quantity of cured food such as Hake, Cod, Ling, Herring, Haddock and Coal Fish into the interior of the country, while they could dispose of such fish as could not be cured, such as Turbot, Plaice, Mackerel, Gurnard, John Dorey, Ray and Soles at the markets along the coast. The cured fish, even with the present limited supply brought to the markets of Westport and Newport [County Mayo] is sold as low as a penny per lb. free from bone, green salted (that is not dried) and sometimes not so high as a halfpenny per lb. fresh….[…]…The company should establish stations along the coast: say they began with three, one at Killibegs, one at Newport Pratt and one at the Shannon Mouth…[From the Store at Ballyshannon I would send fresh fish packed in Ice and also cured fish by water carriage through the Enniskillen Lakes and by the Ulster Canal on to Belfast, supplying all the intermediate twons and interior of the country….

Chapters in the book include for example: Herring Nets – Buoys – Mode of Curing / Curing the Herring / The Rhodry-More / The Cod Fisheries / Lobster, Crab and Cray Fish / Packing Herring etc. etc. 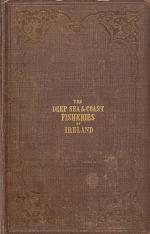 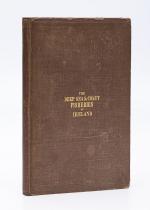