Paradise Lost – A Poem in Twelve Books. A New Edition, with Notes of various Authors, by Thomas Newton [Complete with two Portraits and 12 plates].

Two Volumes (complete set). London, Printed for J. and R. Tonson and S.Draper, 1749. Large Quarto (23 cm x 27.5 cm). Pagination of Volume One: Frontispiece-Portrait of a young John Milton, [18 unnumbered pages of Dedication and Preface], LXI pages of “The Life of Milton”, [5 unnumbered pages of Homage in Verses by Samuel Barrow [Physician to Charles II. and admirer of Milton] and also the important poem on Milton’s Paradise Lost by Andrew Marvell [English Metaphysical Poet and Milton’s ‘Latin Secretary’], 16 pages of “A Critique upon the Paradise Lost – By Mr.Addison” [Joseph Addison], 459 pages with six (6) full-page engravings / Pagination of Volume Two: Frontispiece-Portrait of an elder John Milton (dated 1670), 444 pages including six (6) full-page engravings plus 132 unnumbered pages of Index. Hardcover / Modern, stunning half-leather bound to 18th-century style with gilt lettering and ornament on spine. Both Volumes now in protective Mylar. Excellent condition with only a few signs of foxing. The paper in fantastic condition, illustrations and portraits impressive; wide margins make this a great collectable. A rare opportunity to acquire this important publication in a firm and beautiful binding. The exceptional restoration was done by an english master-bindery.

The very important First “Newton-Edition”, an annotated, critical edition with a thorough Biography of Milton and critical Notes.

Thomas Newton (1 January 1704 – 14 February 1782) was an English cleric, biblical scholar and author. He served as the Bishop of Bristol from 1761 to 1782. n. Newton was educated at Trinity College, Cambridge and was subsequently elected a fellow of Trinity.[4] He was ordained in the Church of England and continued scholarly pursuits. His more remembered works include his annotated edition of Paradise Lost, including a biography of John Milton, published in 1749. In 1754 he published a large scholarly analysis of the prophecies of the Bible, titled Dissertations on the Prophecies. In his 1761 edition of Milton’s poetry, he gave the title On His Blindness to Sonnet XIX, When I Consider How My Light is Spent. Newton was appointed the Bishop of Bristol in 1761 and in 1768 became the Dean of St Paul’s Cathedral in London. He has been considered a Christian universalist. (Wikipedia)

John Milton (9 December 1608 – 8 November 1674) was an English poet and intellectual who served as a civil servant for the Commonwealth of England under its Council of State and later under Oliver Cromwell. He wrote at a time of religious flux and political upheaval, and is best known for his epic poem Paradise Lost (1667). Written in blank verse, Paradise Lost is widely considered to be one of the greatest works of literature ever written.
Writing in English, Latin, Greek, and Italian, he achieved international renown within his lifetime; his celebrated Areopagitica (1644), written in condemnation of pre-publication censorship, is among history’s most influential and impassioned defences of freedom of speech and freedom of the press. His desire for freedom extended into his style: he introduced new words (coined from Latin and Ancient Greek) to the English language, and was the first modern writer to employ unrhymed verse outside of the theatre or translations.
William Hayley’s 1796 biography called him the “greatest English author”, and he remains generally regarded “as one of the preeminent writers in the English language”, though critical reception has oscillated in the centuries since his death (often on account of his republicanism). Samuel Johnson praised Paradise Lost as “a poem which…with respect to design may claim the first place, and with respect to performance, the second, among the productions of the human mind”, though he (a Tory and recipient of royal patronage) described Milton’s politics as those of an “acrimonious and surly republican”. Poets such as William Blake, William Wordsworth and Thomas Hardy revered him.

Milton’s magnum opus, the blank-verse epic poem Paradise Lost, was composed by the blind and impoverished Milton from 1658 to 1664 (first edition), with small but significant revisions published in 1674 (second edition). As a blind poet, Milton dictated his verse to a series of aides in his employ. It has been argued that the poem reflects his personal despair at the failure of the Revolution yet affirms an ultimate optimism in human potential. Some literary critics have argued that Milton encoded many references to his unyielding support for the “Good Old Cause”.
On 27 April 1667, Milton sold the publication rights for Paradise Lost to publisher Samuel Simmons for £5 (equivalent to approximately £770 in 2015 purchasing power), with a further £5 to be paid if and when each print run sold out of between 1,300 and 1,500 copies. The first run was a quarto edition priced at three shillings per copy (about £ 23 in 2015 purchasing power equivalent), published in August 1667, and it sold out in eighteen months.
Milton followed up the publication Paradise Lost with its sequel Paradise Regained, which was published alongside the tragedy Samson Agonistes in 1671. Both of these works also reflect Milton’s post-Restoration political situation. Just before his death in 1674, Milton supervised a second edition of Paradise Lost, accompanied by an explanation of “why the poem rhymes not”, and prefatory verses by Andrew Marvell. In 1673, Milton republished his 1645 Poems, as well as a collection of his letters and the Latin prolusions from his Cambridge days. (Wikipedia) 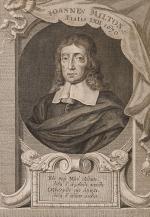 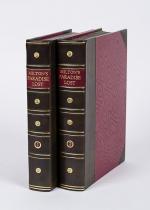 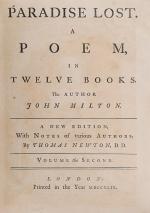 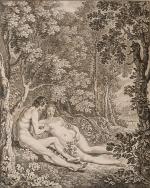 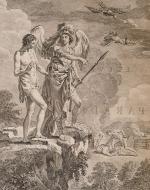 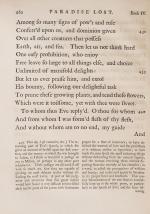 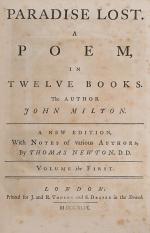 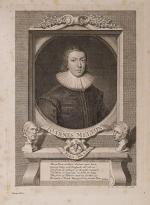 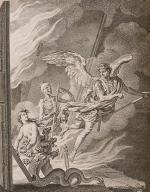 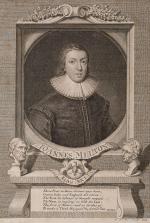