Holland, Sony Classical Music, 2001. CD Size. Booklet and 9 CD’s. Original Hardcover. Besides some minor foxing to the booklet and box, this rare set of 9 CD’s is in excellent condition. [Sony Classical].

Igor Fyodorovich Stravinsky (17 June [O.S. 5 June] 1882 – 6 April 1971) was a Russian composer, pianist and conductor, later of French (from 1934) and American (from 1945) citizenship. He is widely considered one of the most important and influential composers of the 20th century.
Stravinsky’s compositional career was notable for its stylistic diversity. He first achieved international fame with three ballets commissioned by the impresario Sergei Diaghilev and first performed in Paris by Diaghilev’s Ballets Russes: The Firebird (1910), Petrushka (1911), and The Rite of Spring (1913). The last transformed the way in which subsequent composers thought about rhythmic structure and was largely responsible for Stravinsky’s enduring reputation as a revolutionary who pushed the boundaries of musical design. His “Russian phase”, which continued with works such as Renard, L’Histoire du soldat, and Les noces, was followed in the 1920s by a period in which he turned to neoclassicism. The works from this period tended to make use of traditional musical forms (concerto grosso, fugue, and symphony) and drew from earlier styles, especially those of the 18th century. In the 1950s, Stravinsky adopted serial procedures. His compositions of this period shared traits with examples of his earlier output: rhythmic energy, the construction of extended melodic ideas out of a few two- or three-note cells, and clarity of form and instrumentation. (Wikipedia) 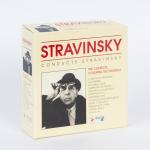 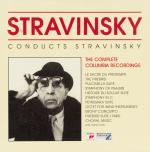