Historical Russian Archives – Alexander Gauk Edition – Volume 2: 10 CD Box-Set with Live Recordings made between 1949 and 1961. 10 disc box set featuring the recordings of conductor Alexander Gauk. The works include Tchaikovsky’s ‘4th Symphony in F Minor, Op. 36’, Cesar Cui’s ‘Suite No. 2 in E Major, Op. 38’, Liapunov’s ‘Symphony No. 1 in B Minor, Op. 12’, Franz Schubert’s ‘Symphony No. 4 in C Minor, D 417’ and Ravel’s ‘Introduction and Allegro for Harp, Flute, Clarinet & Strings’ – Piston’s Symphony No.6 “Gettysburg” and many others. Some of the featured orchestras include the Moscow Symphony Orchestra, State Symphony Orchestra of USSR and the Grand Symphony Orchestra of the Radio Committee.

Aleksandr Vassilievich Gauk (15 August [O.S. 3 August] 1893 – 30 March 1963) was a Russian/Soviet conductor and composer.
Aleksandr Gauk was born in Odessa in 1893. He recalled his first experience as hearing army bands and his mother singing and accompanying herself at the piano. When he was seven he began piano studies and at 17 travelled to St Petersburg and managed to gain entrance to the class of Daugover, later moving over to Felix Blumenfeld. He saw Arthur Nikisch, Claude Debussy and Richard Strauss conduct and was particularly taken by the former.
Gauk’s first conducting experience was in 1912 with a student orchestra, and professionally on 1 October 1917 for a production of Tchaikovsky’s Cherevichki at the Petrograd Musical Drama Theatre. He spent much of the 1920s as conductor for the Mariinsky Ballet. He married the ballerina Elena Gerdt.
From 1930 to 1934, he was chief conductor of the Leningrad Philharmonic Orchestra. On 6 November 1931, he conducted that orchestra and the Academy Capella Choir in the world premiere of Shostakovich’s Symphony No. 3 in E flat major, Op. 20 “First of May”.
From 1932 he worked in Moscow and became chief conductor of a new radio orchestra in 1936, which evolved into the USSR State Symphony Orchestra. During the Second World War, after escaping from Riga, he taught in Moscow, before spending two years at the Tbilisi Conservatory and reviving the Georgian State Symphony Orchestra.
He restored Rachmaninoff’s discarded First Symphony from the orchestral parts found in the archives of the Moscow Conservatory after the composer’s death in 1943. He conducted the world premiere of Khachaturian’s Cello Concerto in Moscow in 1946.
Gauk’s own compositions include a symphony, chamber works for strings and works for piano. He left an unfinished autobiography.
His huge recorded legacy is now only partly accessible; Brilliant Classics has issued a set of reissues, including works by Arensky, Prokofiev, Khachaturian and Shostakovich. His most notable students art Edouard Grikurov, Yevgeny Mravinsky, Ilja Musin, and Yevgeny Svetlanov. (Wikipedia) 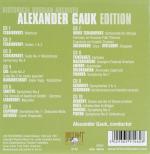 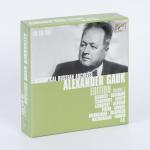 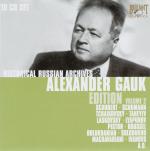