Central America with Guatemala, Honduras, Salvador, Nicaragua, [Mosquito Territory] and Vignettes and illustrations of Belise [Belize, formerly British Honduras], the Volcano of Isalco and The Great Square of the Antigua in Guatemala.

First French Edition. 4 Volumes [complete set of two works with 2 Volumes each]. Paris, Dentu, 1801-1806. 35.5 cm x 55.8 cm. Collation: complete. Pagination: Volume I: XVI, 403, (1) pages / Volume II: 326, (2) pages including Errata-leaf / Volume III: X, 310 pages / Volume IV: 312 pages. Original contemporary red calf with gilt lettering and ornament to lacquer-polished-spine. The Volumes are numbered consecutively, even though these are two separate works. Excellent condition of the binding and interior of this important publication with very minor signs of foxing only ! All the maps in wonderful condition ! First french edition of “Travels into the Interior of Southern Africa” (Barrow’s journey with Lord Macartney in 1797 to the Cape of Good Hope) plus two further Volumes which describe the second journey in 1801 / 1802 to Saldanha Bay [Saldanhabaai] with an early image of Robben Island. The survey of the Dutch colonies was not only a seminal work on South Africa but the beautifully engraved, large folding map of South Africa was a turning point of african cartography and geographical illustration.

The Original Picture of London – Enlarged and Improved. [With two maps / One large Fold-Out-Frontispiece / Engraved Titlepage / 27 Plates with numerous steel engravings (see complete list below)] Being a correct guide for the stranger, as well as for the inhabitant, to the Metropolis of the British Empire together with a description of the environs. The twenty fourth edition, revised and corrected to the present time. 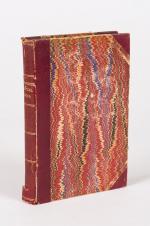 Tropical Africa. With Maps and Illustrations.