[La Divina Commedia / The Divine Comedy – Manoscritto dell’inizio del XX secolo della Divina Commedia di Dante – con strofe manoscritte da “L’Inferno / Inferno” – “Purgatorio” – “Il Paradiso / Paradiso”] – The Manuscript is titled: “Pictures Illustrating The Pilgrimage of the Divine Poet Through The Realms of Punishment of Penance and Peace” – Illuminated Devotional Manuscript of section of “L’Inferno / Inferno” – “Purgatorio” – “Il Paradiso / Paradiso” – with excerpts of Dante’s Divina Comedia, in the style of medieval illuminated manuscripts. The manuscript is a strictly themed Dante Devotion and is of magical quality if one considers the fantastic, original calligraphy artwork, the composition of the manuscript and the coded meaning to the composer of this manuscript. The Folio – size manuscript is massive and has 216 pages, of which 109 pages are with illuminated, original watercolour-paintings in the style of the medieval masters, sometimes collages with watercolour and original etchings, engravings etc. The miniature paintings are juxtaposed with 105 vintage 19th century photographs of famous Italian Art – pieces that are somehow related to Dante’s world or have an allegorical assoziation. Besides the early photographs other juxtaposed artwork or integrated artwork to the illuminations are: an original watercolour depicting the dying Dante, a sensational copper-engraving, depicting an allegorical Dante-scenario, possibly referring to the Divine Comedy, a small photograph of the famous Michelino Fresco encapsulated in one of the illuminations, an artprint attributed “Burne-Jones”, two lithographs, a large steel-engraving, a smaller steel-engraving. Most of the photographs show allegorical sculpture or art by famous italian artists like Giotto, Carpaccio, Andrea Castagna, Luca delkla Robbia, Bellini, Titian, Dosso Dossi, Orgagna, Andrea del Sarto, Fra Angelico, Paul Veronese, Botticelli, Raphael, Michelangelo, Bonifazio, Neri dei Bicci, Francesco Traini, Benozo Gozzoli, etc. etc. and other juxtaposed refer in code to Dante’s Divina Comedia or even depict himself in artform. The photographs also include some breathtaking 19th century Albumen prints of Verona, Lake Garda, Mantua and other Italian landscapes.

England, [Douglas Cockerell / John William North], no year [c.1910]. Folio (34 cm wide x 42.5 cm high). 216 pages. Hardcover / Binding in full green morocco with lettering and Dante’s head as bronze sculpture per inlet to front cover. Binding by Douglas Cockerell, signed “WHS”, during his directorship of W.H.Smith & Son (1905 – 1914). The manuscript is on excellent paper, watermarked O.W.P. & A.C.L. [O.W. Paper & Arts Co. Ltd., established by English painter John William North (1842-1924) in 1895]. The binding rubbed and with some small damages, in need of some minor restoration but overall still very good. The interior, the paper and the artwork all in excellent condition besides one of the juxtaposed photographs (Filippina Lippo) removed from the manuscript with some residue of the photograph remaining and some of the photographs with some dogears and minimal discoloration. All the original artwork in spectacular and fresh condition. The manuscript is a spectacular find and the quality of its execution is of utmost interest for any lover of rare books, manuscripts and special bindings. The circle of Douglas Cockerell, his involvement in one of the most beautiful books ever printed: the Ashendene Press Dante, as well as Cockerell being the binder of this unique manuscript, the fantastic paper used for the manuscript by one of the idyllist movement’s central figures, John William North, and the wonderful Dante – theme of the manuscript with illuminated poetry from the Divine Comedy and the unique style of collage art, lets us rightfully dream that the anonymous composer of the manuscript was an important or at least peripheral member to either the Arts and Crafts Movement, the Ashendene Press or it was someone who worked in the style of the calligraphy schools that were inspired by William Morris or even earlier epigones like Owen Jones. 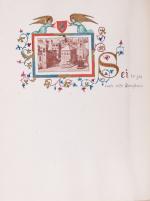 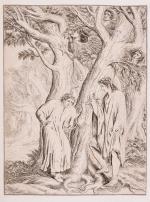 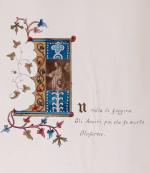 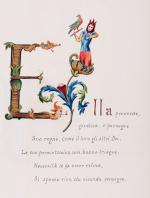 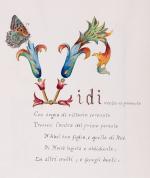 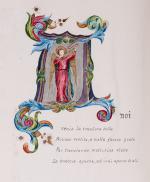