Dymond, An Enquiry into the Accordancy of War with the Principles of Christianit

An Enquiry into the Accordancy of War with the Principles of Christianity and an Examination of the Philosophical Reasoning by which it is Defended: with Observations on some of the Causes of War, and on Some of its Effects. Contempt prior to examination, however comfortable to the mind which entertains it, or however natural to great parts, is extremely dangerous; and more apt than almost any other disposition, to produce erroneous judgments both of persons and opinions.

Includes: Causes of War – National Irritalibility / Ambition – Military Glory / Revealed will of God the sole Standard of decision / Christianity / Dr. Paley’s Moral and Political Philosophy / Evidences of Christianity / From the Lawfulness of Coercion on the part of the Civil Magistrate / Right of Self Defence / Attack of an Assassin / Unconditional reliance upon Providence on the subject of Defence / Effects of War / The duty of a subject who believes that all War is incompatible with christianity etc.

Jonathan Dymond (1796–1828) was an English Quaker and an ethical philosopher who is known for his monograph An Enquiry into the Accordancy of War with the Principles of Christianity.
Jonathan Dymond was the son of a Quaker linen-draper of Exeter, County Devon in England. Both his parents were ‘recorded ministers’ of the Society of Friends. He had little formal education but used his time off from working in his father’s shop to read and to write essays on religious and moral problems, as well as composing poetry. He determined that he should devote his energies to ‘the honour of advocating peace’. In his view war was “an evil before which, in my estimation, slavery sinks into insignificance”. In 1825 he attended the annual meeting of the Peace Society in London and went on to help set up a branch of that society in Exeter. He soon had to withdraw from taking an active part due to his failing health. (Wikipedia) 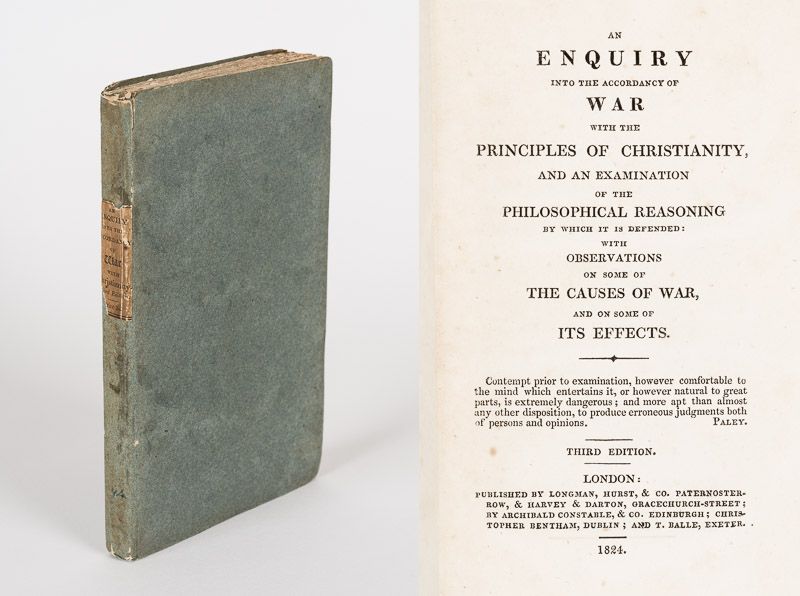 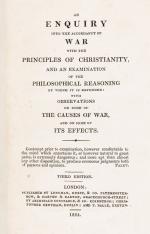