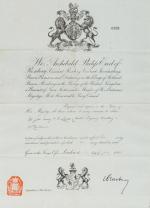 Large Family Archive of the Benwell Rees – Family, including William Benwell Rees (brother to actor Benedict Cumberbatch’s grandmother Helen Rees, by marriage to British Diplomat Henry Arnold Cumberbatch, who was Consul in Romania, Turkey and Lebanon ). The archive includes at least one manuscript letter by Henry Arnold Cumberbatch and around one thousand documents chronicling the lives of the ex-patriate Benwell Rees family from 1890-1970 in Alexandria and Monaco, including William Benwell Rees, whose marriage to Etheldreda Blanche Barker cemented the family’s role in the highest circles of Alexandria life. The archive also charts their son Basil Rees’ decade in Monaco under Princess Grace and Prince Rainer III where he served as President of the British Association in the 1950’s-‘60s and solicited a letter written by Sir Anthony Arthur Duncan Montague Browne, on Winston Churchill’s behalf on Chartwell headed paper in which the former Prime Minister declined to attend an event in Monaco [signed by Montague Browne]. The archive is held in five heavy volumes, bursting with a plethora of amazing and wonderful historical letters, ephemera, emotional messages and telegrams, old images, theatre-programmes, and especially also includes programmes of plays in which ancestors of Benedict played (J.M.Barrie, Shakespeare etc.). The original letters and documents paint an interesting picture of Benedict Cumberbatch’s grandmother’s side of the family history in the Levant, their service in the Middle East and their social lives. The five volumes are bound in bespoke red morocco over textured paper-covered-boards and they contain at least one reference to Helen Rees next to a newspaper-clipping and dozens of wonderful handwritten letters and cards. Each volume about four inches across spine with title in gilt to upper cover and around 100 leaves in each with documents mounted recto and verso throughout, with photographs, invitations, business materials and clippings that chart the family’s life in their service for the British Colonial Office. The five Volumes include for example: Volume 1: The Benwell Rees’: begins with Egyptian Gazette, 1890 and a programme for a performance c1900 at the Port Theatre, Marina, Alexandria of Rumpelstilkskin; visiting cards and contemporary reports of the marriage of W B Rees and Etheldreda Blanche Barker in Alexandria, February 1901; Windsor Hotels prospectus and flyer (a WBR enterprise); 1913 Casino de Monte Carlo ticket for Ethel Rees; Kings School Canterbury ephemera and St Johns’ College, Cambridge for Basil Rees from 1920’s, graduated June 1924. Volume 2: The Benwell Rees’ Vol II, 1920’s-1990’s: includes J M Barrie, Quality Street programme for English Girls’ School, Alexandria, 1941; invitations from Princess Grace of Monaco etc Volume 3: Basil Rees Vol III, cover nearly detached, 1953- Basil Rees living at 2 Rue Origene, Alexandria, and covering period of move to Palais Majestic, Monaco after which he served as President of the British Association and his sudden death in 1967. Invitations to dinner and place settings with the Prince and Princess of Monaco. Birthday greetings; international stamp collecting societies. Photographic ‘Permis de Sejour’ for William Benwell Rees in Monaco, October 1918. Volume 4: Basil Rees Vol. IV Begins with telegram from Rees to the Queen; mostly very extensive formal correspondence concerned with Rees’ Presidency of he British Association in Monaco; invitations, notes, printed volume of Statutes of association from 1950, royal correspondence with Monaco and Britain. Volume 5: Basil Rees 4-5 1902 Vol II; William Basil Benwell Rees; Royal Navy ID card, British Forces, September 1943 – other material relating to Rees’ work as Duty Defence Officer at the Royal Navy Defence Base in Alexandria, HMS Nice. Volume begins in 1902 and includes Alexandria Dog Show, W B B Rees at Jesus College, Cambridge; Egypt NAAFI permits; lock of Basil Rees’ hair, aged 2 etc. 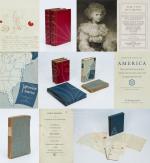 Archive of a fantastic series of 42 Autograph Letters (signed) / Manuscript Letters (signed) by Sir Augustus Foster, British Diplomat and British Ambassador to the United States of America, prior and at the outbreak of the War of 1812. Fortyone (41) of the letters are addressed to his friend, Sir Charles Stuart, Baron Stuart de Rothesay (1779-1845), secret agent, diplomatist, privy councilor as well as British Ambassador to France and Ambassador to Russia. The 42nd letter in the Archive, is a meaningful, three-page-letter, written by Sir Augustus Foster from Copenhagen in the year 1818, to his mother, Lady Elizabeth Foster [Elizabeth Christiana Cavendish, Duchess of Devonshire]. The Letters comprise of sizes between Octavo and Quarto and amount to 130 pages in total, written from Turin (27) & other places, including Stockholm, London, Calais and Geneva, 1818-1841 / Important: The Archive includes also three important publications which touch on the work of Sir Augustus Foster in America: [1.Richard Beale Davis: “Jeffersonian America – Notes on the United States of America – Collected in the years 1805-1806-1807 and 1811 and 1812 by Sir Augustus Foster, Bart. San Marino, The Huntingdon Library, 1954 / 2. An Extra-Illustrated Version of the publication “The Two Duchesses”, by Vere Foster (son of Sir Augustus Foster), in which an american collector injected a plethora of original engravings, portraits of british and american personalities like Alexander Hamilton, George Washington as well as other contemporaries of Sir Augustus Foster (see 80 photographs of this breathtaking set, bound in red-morocco, on our website) / 3. [James Madison / James Monroe / Sir Augustus Foster – War of 1812] – “Three messages, from the President of the United States, to Congress, in November 1811, together with Documents accompanying the same”. Washington; printed 1811. Re-Printed for J.Hatchard, Bookseller to her Majesty, opposite Albany, Piccadilly, 1812 – The material here relates directly to the war of 1812; much of it is in the form of correspondence between Sir Augustus John Foster, H.M. Minister in America and James Monroe, Secretary of State under James Madison from 1811 to 1817. Other significant contributors include Mr. Pinkney and Lord Wellesley. Extremely scarce original edition. (No copy of the 1811 edition located. Not in COPAC or Sabin)] See more than 200 Images for all these books and manuscript letters in the Augustus Foster Archive on our website under “Libraries & Collections” /

Turin / London / Stockholm / Copenhagen / Calais / Geneva, 1815 – 1841. Octavo – Quarto. The Letters are housed in a beautiful, bespoke Solander-Chemise. The original books are either bound in Morocco (″Two Duchesses”), original cloth with dustjacket (″Jeffersonian America”) or in the publisher’s original interim-wrappers (the rare 1812-printing of “Three messages, from the President of the United States, to Congress, in November 1811, together with Documents accompanying the same”). Very good condition with some minor signs of wear only.

Amazing Vere Foster-Collection including Educational Materials and as a centerpiece the “Presentation Copy of “The Two Duchesses” with Autograph / Manuscript – Letter by Vere Foster to his niece, Emily Albinia “Alba” Foster. With a stunning, unpublished, two-page-letter, revealing several important details about the immediately favorable reviews and reception of the book [″in the Daily Telegraph”] and Vere Foster’s disdain about some criticism from one J.Donohue [which led to an alteration in the second edition of the book]. Vere Foster is also expecting a review to appear in the “Athenaeum” but reports “the Athenaeum has nothing yet”. Vere Foster apologizes to his niece for the delay in sending the book and explains that he had left 12 “parcels″£ with Blackie’s agent and gave instructions to send them but a few days later found they had been “untouched”. / The Two Duchesses – Georgiana, Duchess of Devonshire / Elizabeth, Duchess of Devonshire – Family Correspondence of and Relating to Georgiana, Duchess of Devonshire / Elizabeth, Duchess of Devonshire, Earl of Bristol (Bishop of Derby), The Countess of Bristol, Lord and Lady Byron, The Earl of Aberdeen, Sir Augustus Foster Bart, and Others, 1777-1859.

First Edition. London / Glasgow and Dublin, Blackie & Son Limited, 1898. Octavo (15 cm x 22 cm). Pagination: Frontispiece, IX, [3], 497 pages with 18 Illustrations (including frontispiece and one Vignette of the two Duchesses opposite page 1). Hardcover / Original, publisher’s green cloth with gilt lettering on spine. Very good condition with some minor signs of wear only. This is an astonishing find for the Vere Foster Research Community and the letter gives significant insight into the importance the publication had for him, its reception as seen by Vere Foster and it solves the riddle why an altertaion was necessary for the second edition [which Vere Foster explains in a brief note to the reader at the beginning of the second edition]. The heartfelt inscription to his niece Albinia Foster is also of great importance and to our knowledge the only presentation-copy of this book on the international market for the several decades we can look back at auction records.

London / Glasgow and Dublin, Blackie & Son Limited, 1898. Octavo (16 cm x 22,5 cm). XII, 497 pages with 16 full-page-illustrations and one small vignette, showing the Two Duchesses in cordial embrace. Hardcover / Original, green publisher’s cloth with gilt lettering and ornament to spine and armorial supralibro to cover with the Motto of the “British chivalric Order of the Garter”: “Honi soit qui mal y pense” [″shame on anyone who thinks evil of it”]. Very good condition with some minor signs of wear only. “Presentation Copy of “The Two Duchesses” with Autograph / Manuscript – Letter by Vere Foster to his niece, Emily Albinia “Alba” Foster. With a stunning, unpublished, two-page manuscript letter, revealing several important details about the immediately favorable reviews and reception of the book “Two Duchesses” [″in the Daily Telegraph”] and Vere Foster’s disdain about some criticism from one J.Donohue [which led to an alteration in the second edition of the book]. Vere Foster is also expecting a review to appear in the “Athenaeum” but reports: “the Athenaeum has nothing yet”. Vere Foster apologizes to his niece for the delay in sending the book and explains that he had left 12 “parcels” with Blackie’s agent and gave instructions to send them, but a few days later found they had been “untouched”. One of the most important finds of Vere Foster – Material in recent years with no sign of similar material on offer in the past years on the international market. 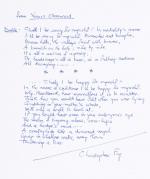 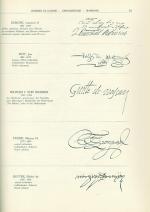