Hoyle’s Games Improved : Being practical Treatises on the following fashionable Games, viz.: Whist, Quadrille, Piquet, Chess, Back-Gammon, Billiards, Cricket, Tennis, Quinze, Hazard, and Lansquenet. In Which Are Also Contained The Method of Betting at those Games upon equal or advantageous Terms. Including The Laws of the several Games, as settled and agreed to at Whites and Stapleton’s Chocolate Houses. Revised and corrected by Thomas Jones, Esq.

Edmond Hoyle – A Short Treatise on the Game of Whist. Containing the Laws of the Game and also some rules whereby a Beginner may, with due Attention to them, attain to the playing it well. Calculations for those who will bet the Odds on any Points the Score of the game then playing and depending. Cases stated, to shew what may be effected by a very good player in critical parts of the game. References to cases, viz. at the end of the rule, you are directed how to find them. Calculations, directing with moral certainty, how to play well and hand or game, by shewing the chances of your partner’s having one, two, or three certain cards. With variety of cases added in the Appendix. By Edmond Hoyle, Gent.
The Laws of the Game, and an explanation of the calculations which are necessary to be understood by those who would play it well. And also, a Dictionary for Whist, which resolves almost all-the critical cases that may happen at the Game. To which is added, an artificial memory: or, an easy method of assisting the Memory of those that play at the Game of Whist.

Edmond Hoyle – A Short Treatise on the Game of Piquet; Directing, With moral certainty, how to discard and Hand to Advantage, by shewing the Chances of taking in any one, two, three, four, or five certain Cards. Computations for those who Bet their Money at the Game. Also the Laws of the Game. To which are added some rules and observations for playing well at Chess. The Eighth Edition.

Edmond Hoyle – A Short Treatise on the Game of Back-Gammon [Backgammon]. Containing, A Table of the thirty-six Chances with Directions how to find out the Odds of being hit, upon Single or double Dice. Rules whereby a Beginner may, with due Attention to them, attain playing it well. The several Stages for carrying your Men home, in order to lose no Point. How to find out who is forwardest to win a Hit. Cases stated for Back-Games, with Directions how to play for one. Cases stated, how to know when you may have the better of saving a Gammon by running. Variety of Cases of Curiosity and Instruction. The Laws of the Game. The Ninth Edition.

Edmond Hoyle (1672 – 29 August 1769) was a writer best known for his works on the rules and play of card games. The phrase “according to Hoyle” (meaning “strictly according to the rules”) came into the language as a reflection of his generally perceived authority on the subject; since that time, use of the phrase has expanded into general use in situations in which a speaker wishes to indicate an appeal to a putative authority.
Little is known about Hoyle’s life; he is primarily known through his books. Much of what is written about him is untrue or exaggerated.The suggestion that he trained at the bar seems unfounded.
By 1741, Hoyle began to tutor members of high society at the game of whist, selling his students a copy of his manuscript notes. Hoyle expanded the manuscript and published A Short Treatise on the Game of Whist in 1742, selling it for the high price of one guinea. When the book quickly sold out, rather than publish a new edition, Hoyle sold the rights to Whist to bookseller Francis Cogan for 100 guineas, an enormous sum for a small pamphlet. Before Cogan was able to publish a second edition, two printers pirated the work, giving the author as “A Gentleman” rather than Hoyle. The printers disguised their identities by publishing under false names, one as Webster, the other as Webb. Cogan published second and third editions of Whist and two months later, obtained an injunction against the pirates which he announced in a fourth edition (all 1743). To distinguish the genuine editions from the piracies, Cogan paid Hoyle twopence per copy to autograph the genuine works. The piracies were profitable to Hoyle, though a disaster for Cogan who was forced to lower the price of the book to match the pirates and to pay for Hoyle’s signature.
The rules of whist published in A Short Treatise on the Game of Whist were regarded as authoritative until 1864, after which time they were superseded by the new rules written by John Loraine Baldwin and adopted by the Arlington and Portland clubs. (Wikipedia) 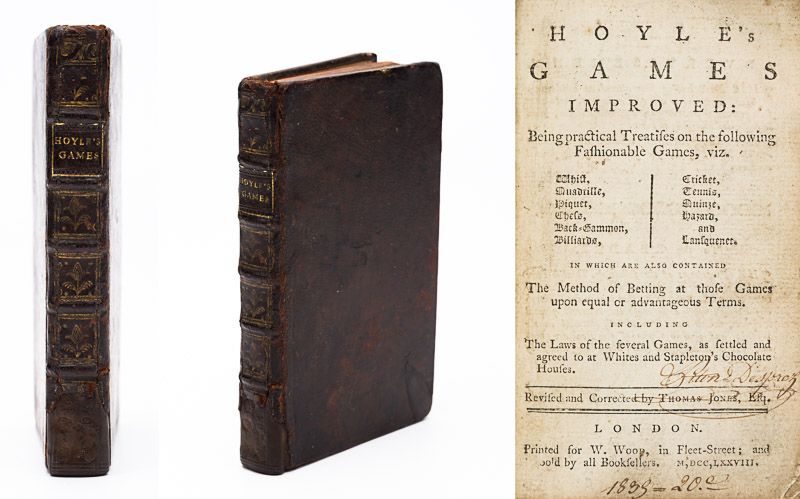 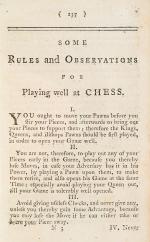 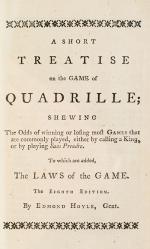 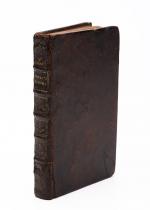