Alexander, The Hidden Servants and Other Very Old Stories.

The Hidden Servants and Other Very Old Stories. Told over again by Francesca Alexander.

Stories include: The Hidden Servants / The Bag of Sand / Il Crocifisso della Providenza / Angels in the Churchyard / The Origin of the Indian Corn / The Eldest Daughter of the King / Bishop Troilus / The Crosses on the Wall / Suora Marianna / The Lupins / The Silver Cross / The Tears of Repentance

Francesca Alexander was an American illustrator, author, and translator from the Italian. She was born Esther Frances Alexander in Boston, Massachusetts and educated at home. At age 16, her family moved to Florence, Italy, where she collected folk songs, tales, and customs. Her first batch of translations of Tuscan songs and stories, later published as Roadside Songs of Tuscany, was drawn from a celebrated story-teller, Beatrice Bernardi of Pian degli Ontani. In it Alexander translated Bartolomeo Casenti’s ottava rima ballad (1616) about a little servant girl turned saint, with Italian original opposite the translated English stanzas. Alexander illustrated her translations with drawings done in a fine and highly personal style. In 1882 she met John Ruskin, who was to be a close friend until his death. He was deeply impressed by her Roadside Songs and purchased it along with a second manuscript that he published in 1883 as The Story of Ida with its author listed simply as “Francesca.” The volume enjoyed several British and American editions. 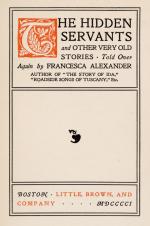 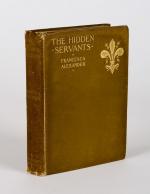 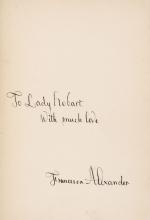